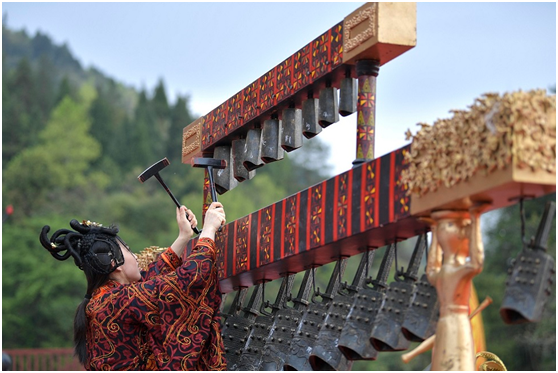 Zenghouyi chime bells, an ancient Chinese musical instrument with a history of more than 2,400 years, has gained new vigor and enjoys great popularity in the modern world, thanks to the country’s burgeoning digital technologies and cultural and creative industry.

Excavated in 1978 from the tomb of Zenghouyi, or Marquis Yi, a ruler of the Zeng State during the Zhou Dynasty (1046-256 B.C.), in Suizhou city, central China’s Hubei province, the ancient Chinese musical instrument represents the pinnacle of bronze musical instruments-making in the Warring States Period (475-221 B.C.) of China.

It is by far the largest, heaviest, best-preserved, and finest set of chime bells ever unearthed in China and has the most complete temperament and range among all chime bells unearthed in the country.

More importantly, the racks and bells of the instrument bear inscriptions consisting of a total of 3,755 Chinese characters, which contain rich and complete knowledge of music.

The chime bells is nowthe most precious treasure of the Hubei Provincial Museum in Wuhan City, the capital of Hubei province.

Today, in addition to watching and learning about the ancient percussion instrumentat the museum, people can also buy cultural and creative products featuring the chime bells, “play”it with the help of digital technologies including holographic projection, and enjoy chime bell performances given by the Hubei Provincial Museum Chime Bell Orchestra.

“Zenghouyi chime bellsis a symbol of China’s rites and music culture and has been the most valuable piece of intellectual property,which has facilitated our efforts to build cultural and creative brands,” said Wang Liang, director of the museum’s marketing department and deputy head of the orchestra.

According to Wang, the museum began to develop chime bell-themed creative and cultural products in the 1990s.At first, it made full-size replicas and miniature versions of the chime bells, which werevery popularin both the domestic and overseas markets. Then, the museum rolled out stationery and daily necessities featuring the ancient musical instrument, which have also been well received.

The application of digital technologies has “brought the chime bells to life”. In the experience zone of the museum’s comprehensive exhibition hall, the chime bells is projected holographicallyso that visitors can “play” it with their hands. With the help of a virtual reality (VR) headset and hand shank, visitors can “perform” on chime bells according to the prompts of the digital system, immersing themselves in the charm of the cultural relic.

On the eve of the 2022 Chinese Lunar New Year, the Hubei Provincial Museum, China Media Group, as well as other organizations, jointly launched a new media-based interactive project that allows people to “strike” the Zenghouyi chime bells remotely using their mobile phones.

In 1978, when the chime bells was unearthed, a concert was held in Suizhou to test its musical function. The original Zenghouyi chime bells was used to play a famous music composition, and the performance impressed the world. Since then, the original cultural relic has been put under protection. Only its replicas have been used for performances.

Music is a very good way to connect with the audience, said Wang Xianfu, deputy curator of the museum and head of the orchestra. As musicians perform on replicas of the Zenghouyi chime bells, the ancient musical instrument is “revived”, he noted.

In June this year, the Hubei Provincial Museum and the Wuhan Qintai Piano Museum jointly held a concert, during which chime bells and pianos were played together.

In September 2022, the Hubei Provincial Museum held an online concert in cooperation with the Chongqing China Three Gorges Museum in southwest China’s Chongqing Municipality, wowing netizens with an innovative combination of chime bells and guqin