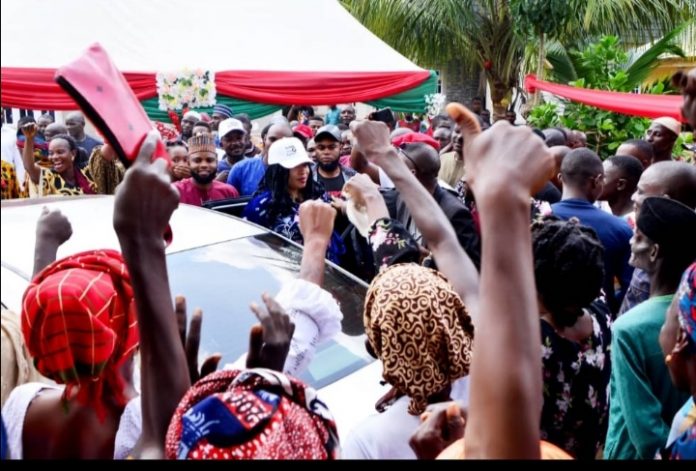 According to its founder, Hon. Joy Odaudu, the group is driven by the overall objective of mobilizing women across the country towards supporting the call on Governor Yahaya Bello to run for the presidency of the country.

Hon Odaudu who is also the Secretary of Omala LG, is one out of the large numbers of women in Kogi that Governor Bello has thrusted into political positions in the state from the Local to the State level.

The event attracted crowd of enthusiastic women and youths from the eleven wards in the area and beyond who converged to be part of the historic moment in the birth of a movement for the actualization of Governor Bello’s national political aspirational.

While reeling out Governor Bello’s achievements, great strides, she pointed out, qualifies him for Nigeria’s top office, Hon. Odaudu described the Kogi Governor as, ” the biggest and most acceptable personality to sell anywhere across the country”.

Governor Bello, she maintained, has demonstrated uncommon concern and commitment to the welfare, development of the state, and the political liberation of women in the state, noting that he has achieved unprecedented feats in the political history of the 30 year old Kogi state.

The burden of ensuring Nigerians experience a new direction in the leadership of the country, she argued, is on Kogi women and youths to market the Governor to Nigerians ahead of the 2023 election.

Joined at the flag off ceremony were; the Chairmen of Omala Local Government, Alhaji Ibrahim Aboh and his Ankpa LG counterpart, Alhaji Ibrahim Abagwu, who called on women across the state to rise up to the challenge of mobilizing for the success of the Governor’s outing in the 2023 presidential race.

Other dignitaries at the event include; Senior Special Assistants on Youth Empowerment, Kogi East, Hon. Matthew Ochada and his counterpart for Tourism, Hajia Mariam Ibrahim as well as other political leaders from various part of the state.

Culled from the Graphic Newspaper