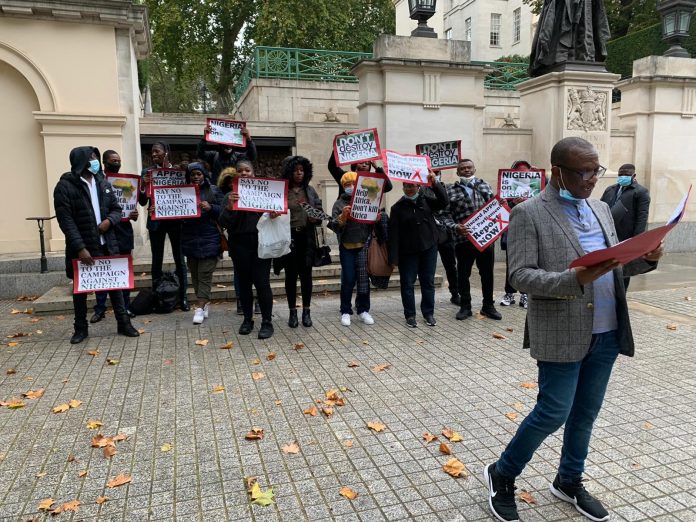 Some activists in the United Kingdom have urged the Commonwealth Secretary-General, Rt Hon Patricia Scotland, to disregard a report by the All-Party Parliamentary Group (APPG) on Nigeria.

The group, known as Commonwealth Activists (CA), made the call in a peaceful procession to the Commonwealth House, London on Thursday, demanding an end to external interference on Nigeria’s sovereignty.

Recall that the APPG had alleged genocide in Nigeria, adding that failure of the Federal Government to protect its citizens is a breach of its obligations under the Commonwealth Character.

Speaking on behalf of other activists, CA’s president, Hameed Williams challenged the Commonwealth to rise in defence of Nigeria at this critical time of its history.

While admitting the security threats confronting the African nation and the efforts of the government, Williams said the Commonwealth, like other stakeholders, have a huge role to play.

According to the activists, APPG’s intent is to cause chaos that would ultimately lead to the country’s disintegration.

The group, however, expressed solidarity with Nigerians and its government, urging the Commonwealth to do likewise.

It also asked the Commonwealth to act in the best interest of Nigeria and not rely on postulations by individuals and groups that have elected to stand against the truth.

As you all know, these are indeed trying times for Nigeria due to the activities of non-state actors that have constituted themselves into impediments to the sustenance of peace and progress in the country. More worrisome is the fact that some externalities have joined the fray, thereby making things the more difficult for the people and government of Nigeria.

We are concerned because Nigeria remains a strategic partner amongst the Commonwealth Nations and it consequently behoves on the Commonwealth Secretariat to rise in its defence by providing that critical rope as a support base for it to navigate the strong tidal waves it is running against.

We have seen, and we have read all sorts concerning the efforts of the Nigerian government in addressing the various security threats in the country. Yes, we know, these threats are politically motivated, but it is not enough to dwell on that alone. There is a need for collective action from all stakeholders concerned, and that is why the Commonwealth Activists is embarking on this procession to the Common Wealth House to solicit that support for the people and government of Nigeria from the Commonwealth Nations of the world.

The threat is real and palpable. Nigeria cannot afford to be left alone in this trying period as that would be most insensitive and counterproductive. Its sovereignty is also under threat posed by some external forces bent on seeing to the disintegration of the country in fulfilment of doomsday prophecies.

We are in solidarity with Nigeria, and our stance is hinged on exposing the half-truths and the conspiracy against its existence that has recently assumed a dangerous dimension with the All-Party Parliamentary Group (APPG) in the United Kingdom attempting to bring about a sectarian crisis in the country through a report released wherein it was alleged that genocidal acts against Nigerian Christians were ongoing and rampant.

It is our considered opinion that the report by the APPG was meant to further interests that means no good for the people and government of Nigeria. This same interest has evolved over the years and to think that it has birthed in the United Kingdom is most worrisome.

The affinity Nigeria shares with the United Kingdom predates contemporary era, and this is the more reason why acts of sabotage against the country should not be traced or domiciled in the United Kingdom of any of the Common Wealth Nations.

This procession is to call for action from the Common Wealth Secretariat to safeguard the sovereignty of Nigeria as a Commonwealth nation. As an organization, we have done our bit by looking at the issues raised in the APPG report and coming out with the facts and the figure with regards to the actual state of affairs in Nigeria.

We have documented this information in a report titled “An x-ray of the report by the All-Party Parliamentary Group U.K. on acts of genocide in Nigeria to ascertain the underlining issues as well as the credibility of the sources of the report by the Common Wealth Activists.”

I have to mention that painstaking efforts were deployed in this report with the overarching aim of putting issues in proper perspectives to aid positive action towards Nigeria in her quest for sustainable growth and development.

The various perspectives highlighted in the report were drawn from primary sources in Nigeria and this, to a large extent, eliminates second-guessing and illogical conclusions, but rather a reflection of the realities on the ground.

This report we shall be availing the Commonwealth Secretary-General for his kind perusal to understand the conspiracies against Nigeria and why the exigencies of time require urgent action in the overall interest of the people and government of Nigeria.

We are not here for lengthy speeches. We are here to canvass for urgent steps to be taken in addressing the various conspiracies against Nigeria. We are also here to ensure that the Commonwealth acts with the best of intentions and interest towards Nigeria and not rely on postulations by individuals and groups that have elected to stand the truth on its head.

We have consequently come out in our numbers to drive home our point for the Commonwealth Secretariat to act and act now before these agents of darkness plunge Nigeria into a crisis of immeasurable proportion.

We believe that our report on Nigeria and the various underlying issues are well captured and would aid the Secretary-General in making an informed decision towards safeguarding the sovereignty of Nigeria.

Thanks and please accept our warm assurances, as, always.