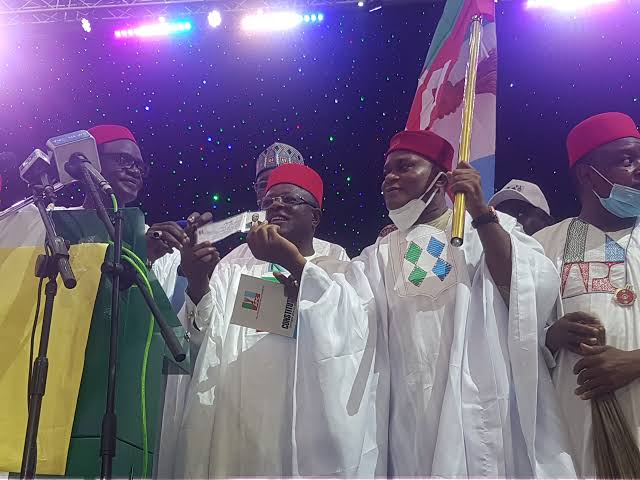 The Association of Ebonyi State Indigenes in the Diaspora (AESID) has called on the federal government to quickly intervene to avert political crisis in Ebonyi state, saying its deeply interested in the peace, prosperity and progress of the state.

The concerns is raised over the recent open threat, intimidation and killing of two citizens for allegedly refused to join the All Progressives Congress (APC) since the defection of governor Dave Umahi.

In a statement signed and made available to newsmen Wednesday in Abuja by the AESID President, Amb. Paschal Oluchukwu, said governor Umahi should be cautioned from making further unverified, unauthenticated and un-factual allegations that could spark the fire of political restiveness and unrest in Ebonyi state.

“For wherever wars have taken place in history, words certainly went first. He must also in addition Iimmidiately call his appointees to order to avoid further attacks on innocent members of the opposition who are simply maintaining their inalienable constitutional right to freedom of association.

“We are therefore deeply worried that rather than face and confront these common issues of hunger, poverty and deprivation which our state that is rated the poorest in the entire Southern Nigeria is currently facing, governor Umahi in reality has chosen to remain an out-of-touch, unfeeling, feudal and anti-neoliberalism with consistent policies that have rather worsened the Economic status of our dear Ebonyi state.”

While condemning the reported shot dead of one Shedrack Nwode and his girlfriend for refusing to shout ‘APC!’ during the thanksgiving service of one of the government appointees at Oriuzor, Ezza North LGA of Ebonyi state on Monday, the association called on the Presidency, Inspector-General of Police, the Director, Department of State Security (DSS), the National Security Adviser (NSA), the Attorney-General of the Federation and indeed, all relevant stakeholders in the Nigerian to ensure that nothing happen the elders and leaders of opposition party in Ebonyi state, their members, supporters and well-wishers.

These leaders, according to the AESID include; “the former President of the Senate and Secretary to the Government of the Federation, Chief Anyim Pius Anyim, the first Civilian Governor of Ebonyi State and serving Senator representing Ebonyi North zone, Sen. Sam Ominyi Egwu, the Senator representing Ebonyi Central and his Southern counterpart, Senators Obinna Ogba and Ama Nnachi respectively.

“AESID’s plea is highly predicated on the directive of Governor Umahi after last week’s security meeting that security agencies should ensure the implementation of policies on tinted glasses of vehicles in the State, the use of siren and the police escort.”