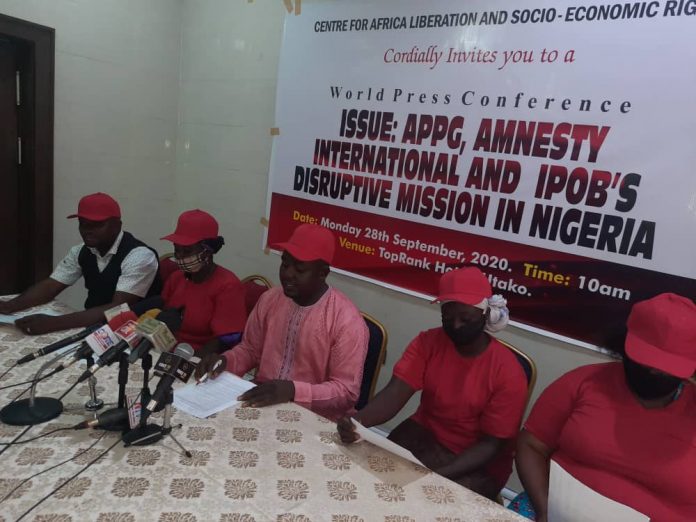 Some ‘discredited’ groups, including Amnesty International and the Indigenous People of Biafra (IPOB), are steering a campaign to dent Nigeria’s image abroad.

This is according to the Centre for Africa Liberation and Socio-Economic Rights (CALSER) in its address to Rt Hon Patricia Scotland QC, Commonwealth Secretary-General and the United Kingdom Parliament.

Speaking at a press conference on Monday in Abuja, Executive Director, Abubakar Gana brought the attention of the Commonwealth and UK to the deliberate attempt by these groups to paint Nigeria negatively in the international community.

CALSER said it will be dangerous to depend on AI, IPOB and other organisations with ill-intents to judge the situation in Nigeria.

According to the group,  the UK All-Party Parliamentary Group (APPG) have also been covertly aiding and abetting non-state actors in the festering conflict towards an overarching aim of destabilizing Nigeria.

CALSER said AI lacks the moral right to condemn the Nigerian government especially as it has ignored the numerous crimes perpetrated by proscribed IPOB and the Islamic Movement in Nigeria.

The centre, therefore, warned Amnesty International and the UK All-Party Parliamentary Group to desist from their despicable campaign against Nigeria.

It added that Nigerians will not tolerate any further attempts at undermining the efforts of the government towards the preservation of peace and stability.

CALSER, however, warned that should there be an escalation of conflict in any part of Nigeria, Amnesty International and the UK All-Party Parliamentary Group should be held responsible.

The exigencies of time demand that urgent and proactive steps are taken towards enlightening members of the unsuspecting general public as well as organizations the ignoble role some foreign organizations playing in the perpetuation of violence and instability in Nigeria.

CASLER as a key stakeholder in the entrenchment of sustainable development in Nigeria is alarmed that some organizations such as Amnesty International and recently the UK All-Party Parliamentary Group (APPG) have been covertly aiding and abetting non-state actors in Nigeria in the festering conflict towards an overarching aim of destabilizing Nigeria.

We are aware that these groups have been in the vanguard of providing intellectual assistance to militant and terrorist groups in Nigeria by engaging in acts that undermine National Security in Nigeria.

These discredited groups recently took their trade too far by releasing a report alleging government-aided genocidal acts against Christians in Nigeria. While we wish to state that this remains a figment of their imagination, there is a danger in allowing this narrative to go unaddressed at the risk of igniting sectarian conflict in Nigeria.

The case of Amnesty International presents that of an organization whose mission in Nigeria have on numerous occasions attempted to distract the Nigerian security agencies while bolstering the activities of terrorist and militant groups such as the Boko Haram, Independent People of Biafra, and the Islamic Movement in Nigeria.

It is also on record that Amnesty International has been receiving funding from some questionable sources in Europe as a result of a strategic partnership it entered to undermine the efforts of the Nigerian Military in the war against terrorism and other forms of criminalities in Nigeria.

The Centre for Africa Liberation and Socio-Economic Rights consequently wishes to use this medium to draw the attention of the Secretary-General of the Common Wealth that groups such as Amnesty International, IMN and IPOB are pursuing narrowing interests that are against the collective existence of the country.

We also wish to state despite the avalanche of crimes instigated by IPOB that has led to countless deaths in the country; Amnesty International has continued to come to their defence while criticizing the efforts of the Nigerian security agencies towards the restoration of peace in the country.

IPOB, as an organization has been in the vanguard of instigating violence in Nigeria. On numerous occasions, their members have burnt down police stations and attacked police officers going about their lawful duties. The activities of IPOB has also deprived innocent people their sources of livelihood by disrupting commercial activities by attempting to impose a forceful sit at home order in parts of South-East Nigeria.

CASLER wishes to put it on record that IPOB has continued to harass and intimidate innocent people through their nefarious activities and the likes of Amnesty International still supports their activities at the detriment of peace and stability in Nigeria.

It consequently defeats common sense that any organization would rely on reports and statements issued by Amnesty International and their affiliates in APPG in interfering in the affairs of Nigeria.
It is thus our considered position that the relying on these organizations to make categorical statements on Nigeria is most uncharitable and a case of giving a dog a bad name to hang it.

CASLER in pursuance of peace and stability in Nigeria wishes to send a note of warning to Amnesty International and the UK All-Party Parliamentary Group to desist from their despicable campaign against Nigeria.

We shall not tolerate any further attempts at undermining the efforts of the government of Nigeria towards the preservation of peace and stability in Nigeria. We also wish to advise them to do well to take their trade elsewhere as Nigerians are aware of their plot to see to the disintegration of the country in fulfilment of the mandate given to them by their paymasters.

CASLER also wishes to warn these organizations to take their trade outside the shores of Africa as every attempt at destabilization and disintegration would be resisted in the overall interest of political and Socio-Economic Development of Nigeria and the African continent.

It is our considered opinion that interfering in the affairs of sovereign nations, mainly when such is hinged on outright falsehood and an insatiable quest for the escalation of conflict is tantamount to a crime against humanity.e Common Wealth must also be circumspect in their conduct at the expense of ignorantly giving a voice to the activities of terrorist organizations.

CASLER is as a result of this putting it on record that should there be an escalation of conflict in any part of Nigeria, Amnesty International and the UK All-Party Parliamentary Group should be held responsible.

I thank you all for your time and attention, and it is our prayers that as worthy partners in the Nigerian project, we shall join hands to defeat the enemies of Nigeria.