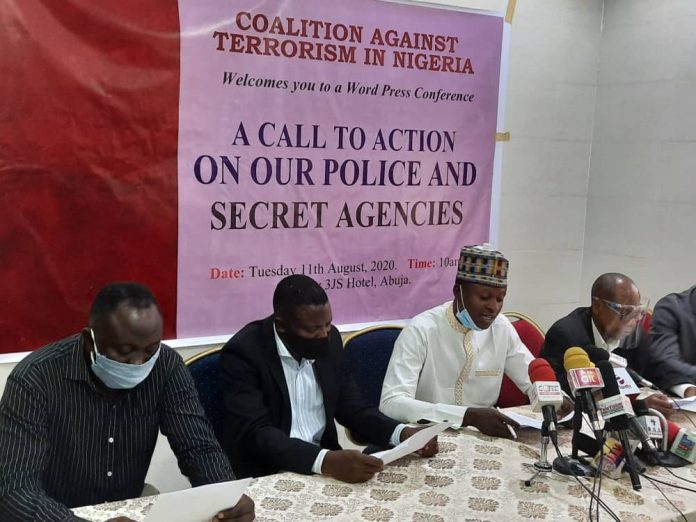 Following a report by the United States over plans by Islamic militant group, al-Qaeda, to infiltrate Southern Nigeria and expand its network across West Africa, the Coalition Against Terrorism in Nigeria (CATN) has charged the police, Department of States Services and other security agencies to be on red alert.

The anti-terrorism organisation also warned Nigerians to equally be vigilant and avoid promoting attempts by some individuals or groups to sow unwholesome propaganda at a time the military has shoved these terrorists to obscure parts of the north.

The Coalition Against Terrorism in Nigeria gave this charge at a press conference on Tuesday in Abuja.

Speaking on behalf of the group, Barr. Abdulmalik Alfa said all hands must be on deck to compliment the efforts of the military.

According to Alfa, the police, National Drug Law Enforcement Agency, DSS and other stakeholders have critical roles to play to support the troops.

“There is no doubt that the sustained offensive by the Nigerian Army against the Boko Haram terrorists and other militant groups across the country has indeed placed these nefarious groups in disarray,” he said.

“This fact was buttressed by the exploits of the Chief of Army Staff, who had been leading the charge against the Boko Haram terror group by physically relocating to North-East Nigeria and directing the counter-insurgency operations.

“The Coalition Against Terrorism in Nigeria has, on numerous occasions encountered the Nigerian troops in operations in North-East Nigeria during some of our on the spot assessment surveys in North-East Nigeria. This is indeed commendable and mostly responsible for the abandonment of the mission of the terror group towards expanding their nefarious activities to other parts of the country.

“We consequently wish to state that there is an urgent need for other critical stakeholders to join hands with the Nigerian Military by extending support in areas necessary towards addressing the threats posed by the Boko Haram/ISWAP terrorist group in the country.

“We also state that the Nigerian Air force has a critical role to play in the war against terrorism by ensuring seamless cooperation with the ground troops in their various operations. This is the applicable norm in countries battling insurgencies. The Nigerian Airforce as a critical stakeholder should continue to sustain and weaken the terrorists through airpower while the ground troops continue to engage in clearance operations.

“The Coalition Against Terrorism in Nigeria also states that from our preliminary reports, other security agencies such as the State Security Services, Nigerian Police, the Civil Defense, the National Drug Law Enforcement Agency, the Nigerian Immigration and the Nigerian Customs Service all have invaluable roles to play in addressing the various security challenges in the country.

” We wish to state that the Nigerian Police Force, as well as the DSS, have the responsibility of ensuring that they secure areas that have been cleared of Boko Haram terrorists because the operations of the Nigerian Army is mobile and not stationary. After liberating communities of Boko Haram elements, it is expected that the security of these communities automatically rests on their shoulders. “

CATN, however, urged the international community to render genuine assistance to Nigeria due to the country’s strategic importance in the African region and among the comity of nations.

Going forward, it advised the US and others to adopt “proper channels of sharing Intel with the security agencies in Nigeria rather than going public as this would go a long way in ensuring that Nigerian citizens do not panic unnecessarily given the sensitivity of such information and the impact it would have on the psychological wellbeing of Nigerians.

“We wish to at this point state that there is a need for the anti-terrorism wing of the Nigerian Police Force to be on alert to ensure that terrorist cells do not spring up anywhere in Nigeria. This is especially necessary with the recent Intel of the attempt by the Al-Qaeda terrorist group to set up terrorist cells in some parts of Nigeria.”

While calling on Nigerians to avoid being used to promote terrorists’ agenda, the group urged “security agencies to be vigilant in their operations to ensure that terrorist networks across the world do not infiltrate any part of Nigeria.”