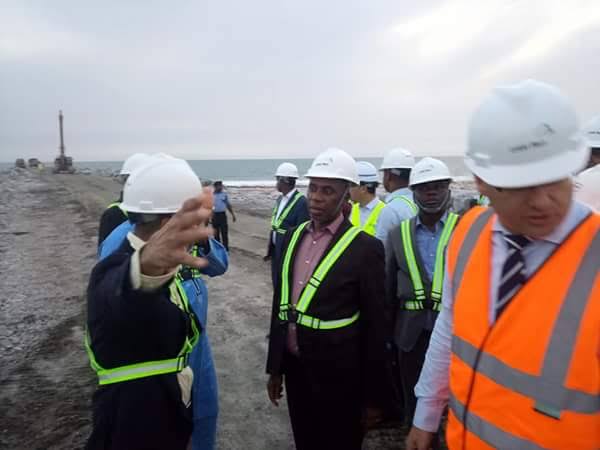 …Calls for arrest of perpetrators of burnt NPA H/Q

Minister of Transportation, Rt Hon. Chibuike Rotimi Amaechi has mandated the concessionaire at the Lekki deep seaport to ensure completion in 2022.

Amaechi gave the directive during an inspection tour of the facility to ascertain the level of work done so far.

The Lekki deep seaport is the first of four deep seaports being constructed by the federal government to improve on what obtains at the other ports across the country.

According to a press release by the Director Press and Public Relations, Ministry of Transportation, Eric Ojiekwe, the minister during the tour during the tour, disclosed that the seaport would have a draught of 16.5 meters, the first if its kind in Nigeria, which would take very big ships and serve as a transhipment centre to other Ports across the country and West Africa.

Also an artificial beach has been created, making the harbour basin calm with dynamic Soil compaction up to 10 metres already achieved on the land side, As well as a Quay wall of up to 1,523 meters and a 1.5km of Breakwater with very high quality granite sourced from Ogun state.

Speaking with reporters, Amaechi said,:“We are here to see what progress they have made. We must tie them to a verbal and written agreement that the seaport would be ready in 2022. They talk about covid, but covid was there when we were working on the railway,. There are hitches here and there, but those are normal hitches you get in the course of construction.”

Asked if he was confident of the 2022 deadline, Amaechi said: “There are many factors to consider,; there are force majeur factors,; the fact that anything could go wrong with the contractor,; there are a lot of things you have to consider, but in terms of contract, it’s assumed that they’ll be tied to the terms of the contract, and the terms include the fact that they should complete in 2022.

“There are about three or four seaports that the Federal Government is constructing under PPP arrangement: The Lekki seaport, Warri, Bonny, then the Ibom seaport which the Akwa Ibom State government is pioneering. So those four seaports, we expect that if they are all not completed before 2023, at least they should get to completion stages,” he said.

Earlier, the Transportation Minister, paid a visit to the Nigerian Ports Authority Headquarters, Marina, Lagos where vandals destroyed and burned a section of the main building in the aftermath of the EndSars protests in the country.

Amaechi who observed that the damage was massive, stated that the perpetrators must be held accountable for their actions.

“If people are arrested for the crime perpetrated, they will not do it again. We have to go after the hoodlums and ensure they pay. The right to protest is defined in the laws of the land, it doesn’t include burning people’s houses, government property,” he said.