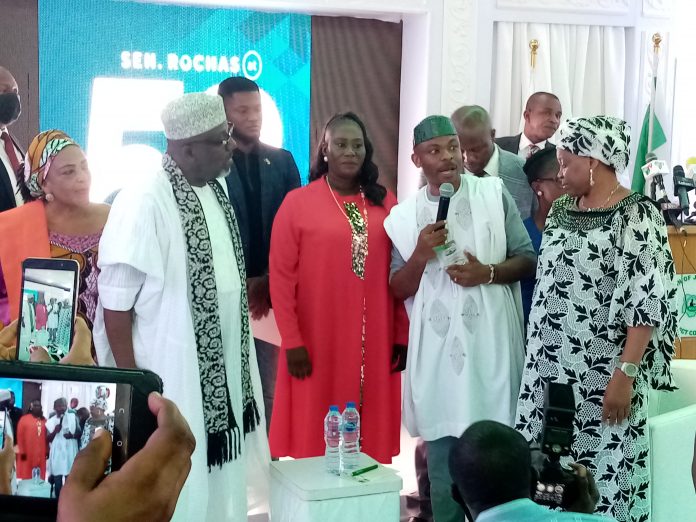 Former governor of Imo State and a current Senator, Rochas Okorocha has insisted that the ruling All Progressives Congress (APC) has no justifiable reason not to zone presidency to the Southern Nigeria in 2023.

Okorocha who made this known Monday in Abuja during a Conversation with the the Nigerian Union of Journalists (NUJ) FCT Council added that he has a vision to be President of Nigeria and it is driving him crazy noting that the culture of rotating the presidency from North to South must be respected.

The event was organised as a build up to his 59th birthday which comes up on 22nd  of September.

He said “the Yorubas of South Western Nigeria, North and the South South have ruled Nigeria in the current political dispensations.

” All the Igbos want from Nigeria is a level playing ground for them to excel.”

He added his voice that it was time to try an Igbo man because he treat governance as seriously as his personal business.

On the agitation for secession by the Nnamdi Kanu led Indigenous Peoples of Biafra, Okorocha advised the Federal Government to engage critical stakeholders from the Southeast to find a political solution to it.

This was as he contended that the force of arms is not the way out of the security situation in the Southeast, urging the government to embark on massive education and enlightenment of the populace.

He said; “I called for a meeting in the Government House when I was governor. They obliged me and came. They complained to me how security forces killed theory people in Okigwe and they were asking me a lot of funny questions.

“I asked them to convince me why I should another passport. If you convince me, then I join you but if I convince you, then you will join me. One of them said to me, ‘Oga, if you are not wise, the person who killed your father will kill you. So, at the end of our discussions, I found myself shaking hands with them and they started laughing.

“These are our children. The handling of the situation has to change. It is not a warfare. It is not a machine gun thing. I was against the military in Imo when I started this project because the Operation Python Dance, you shoot them, how many can you shoot? You shoot 500, and then the ones in Secondary School are still in poverty and hoping to join them. The earlier we educate these our children, the better it is for all of us.

“Nnamdi Kanu’s matter has become a tribal issue and we have lost a sense of the sensitivity of the matter. Ab initio, I had advised that government should have been careful in handling the issue and not to shoot the image of the boy too high.

“The Federal Government and southeast should meet and find a way out to this issue. It is an evil wind that will blow no one no good. Nnamdi Kanu should not be made a very big issue. I wish, like a senator said, that we call this young man and ask him to convince us on why he wants to give us another passport or to ask him about his anger. If we can talk, we would find out that this issue is not worth the trouble we are going through. We need to reorient them because what is common now in the Southeast is that they are saying that they heard that ‘they’ want to give Boko Haram amnesty while Nnamdi Kanu is in detention. So, it is no longer a Kanu thing but has taken a tribal dimension. The earlier we get this issue off and see him as an overzealous young man who didn’t even experience the civil war but who is talking about the war more than those who experienced it, the better for all of us”.

Earlier, Chairman of Council, Comrade Emma Ogbeche congratulated Sen. Okorocha on clocking 59, saying the union decided to honour him with the dialogue because his life has been defined by service and philanthropy.

“Nigeria is said to have about 11.5 million out of school children and if not for the benevolence of people like you, perhaps the figure could have risen to 14 million.

“It is in the recognition of your service to humanity, your unbridled philanthropy that we are persuaded at the FCT Council of the NUJ to honour you and to make it serve as a marker for others to do more for humanity”.

Okorocha also used the occasion to give out 59 academic scholarships to the NUJ for onward disbursement to deserving children.