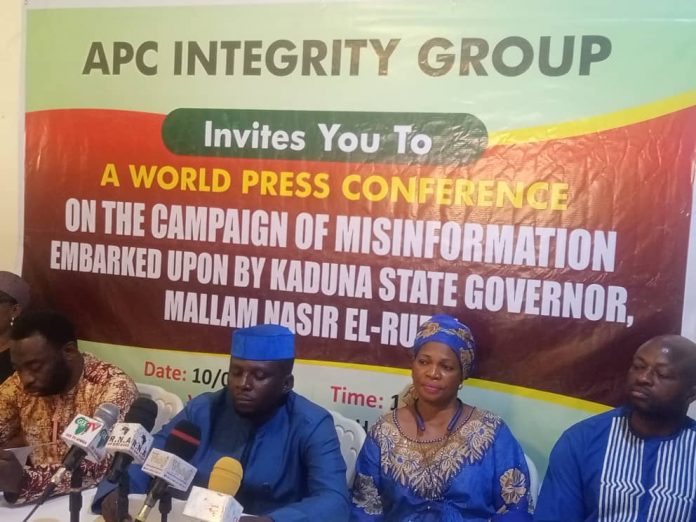 The group said the governor is orchestrating a well-thought plot to sabotage Governor Buni’s efforts for his vice-presidential ambition.

Speaking at a press conference on Thursday, Secretary-General, Patriot Adams Abel, described the Kaduna State Governor as a dictator who is all about his selfish interest and can go to any length to accomplish his mission.

Abel rubbished El-Rufai’s claims that “President Buhari and 19 out of 23 APC Governors are in support of Governor Abubakar Sani Bello to boot out Buni and the CEPCC scribe”.

The group also countered El-Rufai’s statement that Buni had been removed from his office.

Abel said “El-Rufai should be sufficiently schooled to accept that the APC is not Kaduna state that he governs by fiat. APC has organs that have layers of responsibility and at no time was the power to hire and fire a caretaker chairman outsourced to El-Rufai”.

The APC Integrity Group said the governor’s assertion that his Yobe State counterpart declined to swear in state executives were also not valid.

“El-Rufai claimed that Governors and President (Buhari) directed Governor Buni to swear in state Excos elected months ago and that he never followed the order; that the Progressive Governors’ Forum (PGF) asked him to brief them, but he did not,” Abel added.

“He further claimed that PGF did not know anything about the party. As usual, El-Rufai lied. He should have explained how Buni is supposed to swear in state excos when as many as 14 state chapters were bogged down by court cases that resulted from the kind of autocratic tendencies of the PGF. It also showed an absolute disregard for the other arms of government since the Kaduna State Governor was practically expecting his Yobe state counterpart to disregard extant court orders that forbade the swearing-in of some of the state excos he was referring to.

“He also forgot that PGF is not known to law. It is at best a cartel, a criminal one for that matter, and is in no way superior to APC stakeholders, whose wishes Buni rather implemented over that of the vicious minority that the governors are”.

The group, however, expressed surprise that “El-Rufai is denying knowledge of a lawsuit he instigated and financed against Buni when the CECPC chairman was insisting on due process in the scheduling of the convention.

Abel added that “Buni could not have hidden a bomb manufactured by El-Rufai”.

The APC Integrity Group, therefore, warned El-Rufai to stop his blackmail and leave Buni alone to run the CECPC in the fashion he ran it to reduce the crisis in the state chapters of the party.

The group, therefore, challenged El-Rufai to, in concrete terms, prove that the APC governors are opposed to Buni as chairman of CECPC.