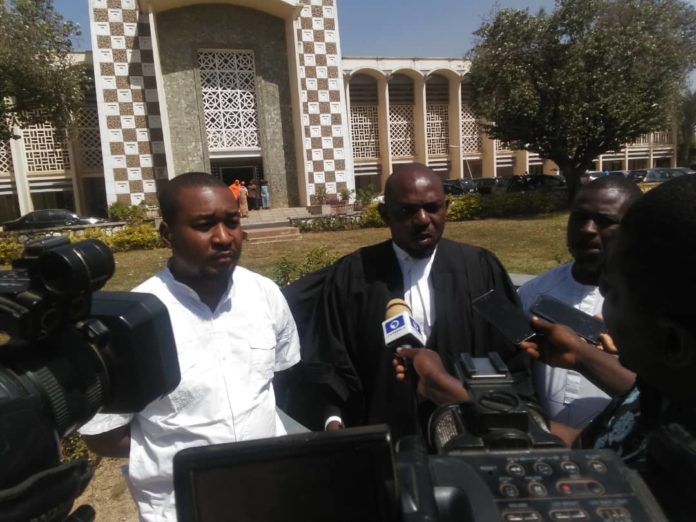 The Centre for Social Justice, Equity and Transparency, CESJET, has approached the state high court in Kaduna asking for an order to stop the spokesman of the Islamic Movement in Nigeria, Ibrahim Musa, from publishing a book on the clash between the IMN and the Nigeria Army saying it is capable of jeopardizing the ongoing trial of the IMN leader, Sheik Ibrahim El-Zakzaky.

Barrister Edward Omaga who spoke with journalists after filing the suit said the centre views the attempt to publish the book as an attempt to prove that Ibrahim El-Zakzakky and his followers are not guilty whereas the State is prosecuting him.

He said one cannot release a book for public consumption at the same time when issues are before the court of law as allowing same will be subjudice.

CESJET in an originating summons filed at the State High Court Kaduna, wants the court to determine whether by virtue of the report of the Judicial Commission of Inquiry into the clash between IMN and the Nigeria army and the gazetted white paper emanating from it, whether the IMN was not proscribed and designated as a terrorist group and whether Ibrahim Musa is not by writing a book on the IMN attempting to commit an act of terrorism.

The centre is also asking the court for an order mandating the commissioner of police in Kaduna State to arrest and prosecute the IMN spokesman for trying to publish the book entitled, ‘ December 2015 Massacre of Shiites in Nigeria. Survivors accounts which it says amounts to trying to dislodge the Nigerian government.

In the summons taken out by Edward Omaga, the center pointed out that by virtue of the report of the Judicial commission of Inquiry and the white paper the IMN  has been proscribed stressing that by trying to launch a book on the IMN, Ibrahim Musa is trying to further the activities of the IMN which the centre described as ‘criminal.’

CESJET further pointed out that being the spokesman of the IMN is enough to taint the book with falsehood, defamation or blackmail capable of inciting the public against the Nigerian government and jeopardizing the ongoing trial of Sheik Ibraheem El-Zakzaky by the High Court of Kaduna State for offences bordering on treason, terrorism and murder.

Omaga said the centre’s interest is in seeing that the security of the nation is not threatened under any guise.

He said it is significant that members of the public are not allowed to engage in activities capable of inciting the public against the government or rubbishing the temple of justice at any point.