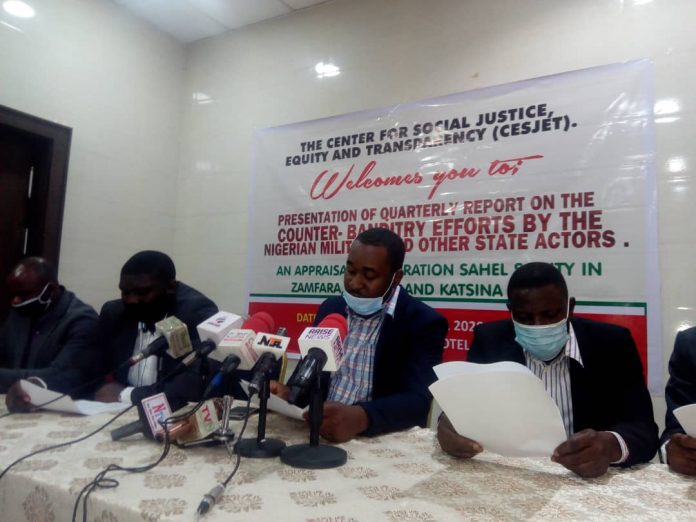 The Centre for Social Justice, Equity and Transparency (CESJET) has hailed the Nigerian Army’s Operation Sahel Sanity as a success already in countering bandits and restoring peace to the northwest.

CESJET made this known in its quarterly interim report on the war against banditry and other forms of criminalities after an assessment tour of the region.

Launched in July, the operation was aimed to dislodge armed bandits, kidnappers and cattle rustlers in the northwest.

And less than two months after, CESJET says the operation has recorded tremendous gains with the people now enjoying a new lease of life.

“It was observed that since the establishment of Operation Sahel Sanity in the states in North West, there has been a near halt of the activities of armed bandits and other criminal elements hitherto operating in the states,” CESJET revealed as part of its findings in the report signed by Executive Secretary, Comrade Isaac Ikpa.

“It was also observed that the North-West Zone has indeed felt the immediate impact of Operation Sahel Sanity with the tremendous successes achieved within the short period.

“These operations have led to the rescue of kidnapped victims, recovery of rustled cattle, the arrest of suspected armed bandits, arrest of bandits informants and collaborators.

“It was also observed that there has been a resumption of farming, social and other economic activities in most communities in North West Nigeria with people going about their normal activities without fear of harassment or attacks from armed bandits and other criminal elements.

“The Centre for Social Justice, Equity and Transparency also observed a high level of cooperation between troops of Operation Sahel Sanity and the members of the host communities who are more than appreciative of the activities of the troops in its various clearance operations as well as rescue mission that has seen to the recuse of those held in captivity by criminal elements”.

After a careful study of the activities of Operation Sahel Sanity and its impact on the affected communities, CESJET, however, concluded that:

“There is a need to sustain the current tempo to ensure that those armed bandits and criminal gangs that have been displaced do not regroup in other parts of the states from where they would carry on with their nefarious activities.

“There is a need to expand the area of coverage of Operation Sahel Sanity to include other states in North West as well as North Central in a bid to effectively address the threats posed by armed bandits and other criminal gangs.

“That there is also a need for well-spirited individuals, groups and NGOs to support families of those displaced as a result of the activities of bandits and other criminal elements before the formation of Operation Sahel Sanity.

“NGOs and other humanitarian organizations should identify ways with which they can render essential services in these communities that were earlier affected by the activities of bandits.

“That the government in these states must continue to extend their support to the troops of Operation Sahel Sanity in a bid to fully address the activities of armed banditry and other forms of criminalities”.