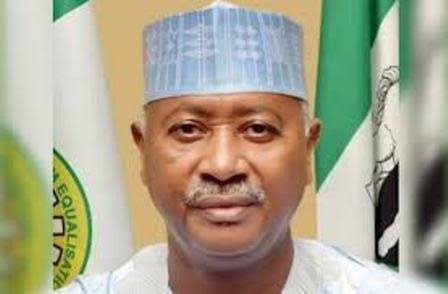 Prolific novelist and scholar, Prof. Chinua Achebe once reminded of a great virtue Nigerians have discarded, but which is still haunting the nation. He said, “One of the truest tests of integrity is its blunt refusal to be compromised.”

Leaders who demonstrate a strength of character or refusal to be compromised often run into murky waters. Pushed dangerously by this demonic spirit of self-discontentment, very few; indeed, very fewer Nigerians hardly bring down their heads to understand a problem or phenomenon before placing themselves in the path of agitators. Sadly. unfounded noisemaking has become an entrenched culture for most Nigerians. Majority of Nigerians freely surf trouble for themselves and others for underserved pecuniary benefits.
It is this inclination which compels majority of Nigerians to repulse leaders who are innovators, transformers and reformers. The Executive Secretary of the Petroleum Equalization Fund Management Board (PEF-M), Alhaji Ahmed A. Bobboi is in the eyes of Nigeria’s self-destructive storm. Bobboi was first appointed PEF-M boss in October 2016 by President Muhammadu Buhari. He had served in PEF for over 20 years before his elevation to head the management board.

Bobboi’s first appointment for a tenure of four years understandably attracted loud eulogies and commendations because of his vast experience as an insider staff of PEF. Those who trumpeted his competence and knowledge knew, he acquired it from the decades of service in PEF. And those who sounded loudest were top players in the oil industry, the organized private sector and other relevant stakeholders intricately linked to the statutory mandate of PEF.

His impeccable records in four years compelled President Buhari’s endorsement of his reappointment for a second term of another four years. Ahmed Bobboi is still basking in the euphoria of a renewed mandate, but the shenanigans, charlatans and street activists have dusted their arsenals of war against him with unfounded slights and fictitious tales to destabilize or distract him from the purposeful service he has rendered to Nigerians in PEF.

Nigeria is a country which amazes so much. People go to bed at nights and in their horrific nightmares, they create an association, which transforms into a pressure group the next morning. Its doubtful, whether some of these “monkeyshines” activism sects are properly recognized by the Corporate Affairs Commission (CAC) or even have the blessings of the gods. But they stage out in public arena with assorted imaginary accusations against a targeted public servant.

Therefore, a few days back, a group of reneges and idlers, under the auspices of “New Initiative for Credible Leadership (NICREL),” which are best discerned as “chop, chop” groups cossetted the familiar game. These set of desperadoes had the effrontery of campaigning for the resignation of Mr. Ahmed Bobboi, PEF Management Board’s Executive Secretary or directing his reversal of a management decision.

The NICREL emergency activists publicized infantile inanities, as condemnation of Bobboi’s PEF’s Management’s 2020 recruitment exercise. It alleged cooked figures of lopsidedness in the employments. But even peripherally, their arguments were feeble and devoid of tangible substance.

It’s unusual for any sensible group of people to assemble and flaunts a faulty regional agenda, tethered on malicious lies, fabrications and outright falsehood. So, NICREL, stabbed itself by mouthing that they “should have been given special consideration and priority from PEF Board during the recruitment.” It defeats every sense and logic.

This statement betrayed plainly, NICREL’s concealed motives for blindly accusing Bobboi of wrongdoings, which are only ludicrous constructions of brainwashed and unpatriotic elements. The salient arguments of the agitators is that they would have been allotted more slots than any other region in Nigeria, since PEF exists because of the crude oil from their lands.

It is crystal clear that the agitations are nowhere near the bandied accusation against Bobboi of breaching the federal character principle and or, the 2020 recruitment exercise was skewed against the Niger Delta in favour of the North.

If it is not jaundiced reasoning by agitators in NICREL and the undisguised intent on orchestrating violence and anarchy, why besiege PEF’s office with protesting placards, whilst the crux of the matter as publicized by agitators is alleged breach of the doctrines of federal character? If NICREL had a genuine case, what restrained it from petitioning the Federal Character Commission (FCC) for a redress, then the barbaric resort to an anarchist conduct?

But in truth, if the FCC principle should be observed, the question is; “… given special consideration and priority from PEF Board during the recruitment,” to Niger Delta as canvassed by NICREL against other regions amounts to the observance of the same federal character doctrines? Are Nigerians of other regions created by lesser gods?

It is indubitable that the agenda of the NICREL anarchists who have weaponized the blackmail of Bobboi is to invent a reason to reignite and fuel violence in the Niger Delta, as evidently and eloquently conveyed in this excerpts from their public statement; “The action by the PEF Board under Ahmed Bobboi is capable of reigniting violence and militancy in the Niger Delta region. Ahmed Bobboi must not be allowed to throw the region into violence which will, in turn, give the President Muhammadu Buhari administration a bad name.”

PEF’s Executive Secretary, Ahmed Bobboi has exhibited an exemplary leadership throughout his more than 20 years sojourn at the agency. His knack for transparency, accountability and probity in the conduct of the affairs of PEF is legendary. He is a stickler to fairness and equality all these years. It is therefore, absurd reasoning for any group to wake up overnight and attempt to destroy these enviable records by accusing him of largely concocted and unsubstantiated allegations of nepotism.

It is the quality leadership offered by Ahmed Bobboi at PEF which earned him a renewal of mandate by President Buhari. And it is the real anger of the emergency street activists in the Niger Delta because all their expectations were focused on the exit of Bobboi after his first tenure to pave the path for the appointment of a pliant replacement. But Buhari disappointed the lords of the minor and distracting or destabilizing the PEF boss is the next agenda. It is now being fiercely and aggressively executed.

However, would the desperation and indignation of NICREL or its acolytes ever obviate the Bobboi’s enduring records of service at PEF and Nigeria? Certainly impossible. Nigerians are skilled experts in pulling the rug off the feet of public servants who are uncompromisingly adroit in sticking to transparency and accountability. Once the dubious tracks of such unpatriotic elements are blocked, they assemble and fight back with every weapon at their disposal.

PEF’s management team and co-workers have attested to Bobboi’s professionalism, tenacity to transparency and fairness on the job. He is overly focused and detribalized. In the workplace, he only befriends dedicated and hardworking staff who have dispensed themselves as planks in achieving the mandate of the agency.

It explains why, quite early in his first tenure, Bobboi enunciated a policy which stipulated that every staff of PEF must have a taste of fieldworks and garner experiences in various internal departments to qualify for elevation to managerial positions. The reform has paid off handsomely with the successes of PEF’s operations and organizational efficiency in managing the diverse challenges of the oil downstream sector. Bobboi supported it with mandatory local and internal staff training and work development skills in strategic areas.

Ahmed Bobboi is a non-conformist and avowed stickler to standards or laid down procedures. Within four years, he has uplifted the agency and entrenched transparency in the activities of PEF-M. The truth remains that Bobboi has manifestly dispensed and demonstrated himself as a square peg in a round hole.

Can Nigerians, including his unconscionable attackers beat the fact that Bobboi did not only accept, but modified and improved the electronic mechanism in PEF known as “Project Aquila,” which he inherited? It has smoothened the operations of PEF in accordance with the e-governance policy of the FGN.

If today Nigerians are witnessing near zero incidents of diversion of petroleum products, it’s because the modified and strictly implemented the “Project Aquila,” effectively monitors from the boardroom, the movements of petrol from depot to depots, serves as a major instrument of gathering data for business intelligence, processing timely payments, minimization of transactional human errors and elimination of fraudulent claims from operators in the oil industry.

And the PEF management under Bobboi has already activated and completed modalities for more intense deployment of information technology innovations to enhance data processing of petrol movements in the country in Nigeria to filling stations, which are the last designated destinations of the PMS.

And what would finally stamp enduringly, on the operations of PEF management under the chief supervisor, Bobboi is its synergy with the National Information Technology Development Agency, in another innovative super technology called the ‘Downstream Automated Fuel Management Information System’ (DAFMIS). It is a unique Fuel Monitoring System (FMS), which electronically gathers and tracks operational data on ships, tank farms, depots, pipelines, trucks and filling stations.

DAFMIS is meticulously primed among other beneficial advantages to improve efficiency, plug loopholes and effectively checkmate wastes in the petrol distribution chain across the country. There are many other innovations and transformations which Ahmed Bobboi has imposed in PEF to curtail sharp practices and enthrone transparency in the operational processes of the agency.

So, Nigerians used to the old order of sharp practices have found Bobboi an unworthy ally because of his tenacious foothold on transparency in PEF-M. Therefore, it is normal to contrive frivolous allegations against his leadership of the agency as poorly staged out by the misinformed and misled NICREL’s excited street campaigners. The issues raised against Bobboi by a segment of Nigerian civil society organizations are actually without merit absolutely.