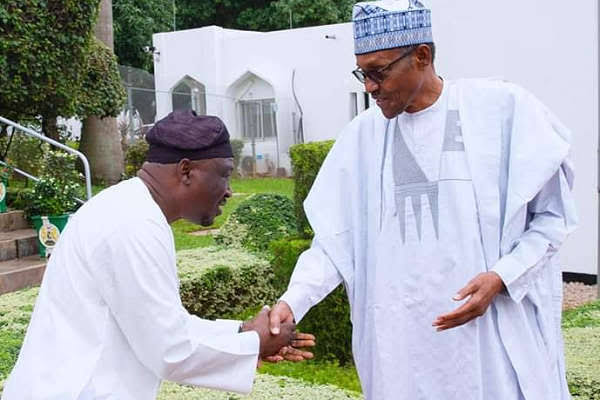 ….tasks President to seal return of peace with infrastructure

The Adamawa Good Conscience Coalition (AGCC) has expressed gratitude to President Muhammadu Buhari for restoring normalcy to the state with the help of the military.

According to the group, the era of violent raids by Boko Haram, bloodshed, abductions and destructions are all in the past thanks to the intervention of President Buhari.

AGCC made this known in a letter of commendation to the president, on Monday, through his Chief of Staff, Ibrahim Gambari.

In the letter co-signed by its President and Secretary-General, Dr Joshua Garuba and Alhaji Hassan Haske, the group said the northeastern state is now enjoying a new lease of life.

With peace and tranquillity the new order, the Adamawa group, however, urged the president to order the North East Development Commission (NEDC) to redouble efforts in rebuilding the places destroyed by insurgency.

The group also implored the president to block all channels to stop terrorists from infiltrating Adamawa from other areas, especially from Borno state.

With exceeding joy and high spirits, the concerned Adamawa citizen under the aegis of Adamawa Good Conscience Coalition  (AGCC) sends you post -Sallah cerebration greetings and Nigerians generally for their consistent support to your administration since 2015. We also thank the Almighty Allah for preserving our lives and the nation under your focused and pragmatic leadership of the country.

Sir, please permit us to bore you with brief details about us. AGCC is a body of eminent citizens of Adamawa state both at home and in the Diaspora. It is an assemblage of people of all ages which cuts across party, religious and ethnic divides. We do not harbour any partisan persuasion of any coloration in this group.

We wish to let you know, our beloved state of Adamawa was one of the states in the Northeast held captive by Boko Haram terrorists and other armed criminal gangs, which combined to create seemingly intractable insecurity problems in the state. Adamawa in all sincerity was a hotbed of Boko Haram operations.

This was before Nigerians saw the wisdom of entrusting you with their destiny as a democratic leader. So far and so very good, you have not disappointed us, but proved your mettle as a true and dedicated leader, who has given his all for the protection of lives and property of our people in the state. We cannot be less proud of you, Mr. President for sustaining the protection of our lives and property.

Therefore, AGCC feels compellingly obliged that the right thing to do at the moment is to pause and appreciate Mr. President for firmly standing by us in the most difficult of times in our history as a people burdened by acts of bloodshed.

It is needless to recount the details, which are known to every Nigerian. But briefly Sir, before your Presidency, Boko Haram and soulmates held us hostage in our state. The violent raids of communities, villages, local governments, public places and markets, with its attendant deaths, bloodshed, abductions and destructions were the menus fed us every day.

The people of Adamawa state were extremely weighed down in spirit by the menace of acts of terrorism to the extent we almost lost the ancestry of our fatherland to these bloody militant groups on a senseless mission of conquest. We lost our peace, dignity and tranquility to the insurgents, even at a time we had top military brass from the state.

We suddenly found ourselves in a mess and boiled in it for years until you came to our rescue. We are excited to proclaim on this day in our history that such gory experiences are no longer part of our existence or experiences as soon as you took over the anti-terrorism operations as the Commander-In-Chief of the Nigerian Armed Forces.

We relish the peace and security now; we cherish the reclamation of our lands from insurgents; we adore you Mr. President.

Your Excellency Sir; AGCC is bolstered by your steadfastness and commitment to Nigeria and the people of Adamawa state particularly. We believe this letter is one of the right things, and the least of things to do having felt the impact of your leadership, Mr. President in appointments of our sons and daughters as well as the total liberation of our state from the claws of terrorism.

AGCC  is proclaiming on behalf of all indigenes of Adamawa state and in good faith that thank you, our dear Mr. President of inestimable value. You have given us a new lease of life. Security, peace and tranquility have descended on Adamawa people under your reign and it has continued to prevail on us with every bliss.

But like Oliver Twist, Mr. President, Sir, please permit us to ask for more. Despite your efforts and attention to our state in the last five years; Adamawa state is still terribly defaced by confounding infrastructural deficits, especially in the rural areas affected by insurgency; may we let you know that the state is in dire need of infrastructures in the area of re-building and reconstruction process as initiated by your Government.

It is indisputable that the years of insurgency in Adamawa have compounded the problem. We therefore, plead with Mr. President in his usual magnanimity to issue a marching order to the North East Development Commission (NEDC) to quickly redouble their efforts in rebuilding the places destroyed by insurgency.

Sir, in particular, we plead that by your directive, let the NEDC expeditiously intervene in areas of Adamawa state like Mubi, Michika, Yola, Madagali, Hyambula and other parts of the state which have been tortured and ruined by insurgency.

Dear Mr. President, some Nigerians have made it a favorite time to disparage your personality and redemptive leadership of Nigeria. But never mind because the distraction is expected and that’s why Almighty Allah has anointed you a leader over us now.

We shall never cringe from praying to Almighty Allah to continue to strengthen the spirit of tolerance of every section of Nigeria in you and the endurance to emerge stronger from all malicious criticisms. We have seen and confirmed your positive actions; positive impacts and shall forever continue to support you and your administration.

Your Excellency Sir, may we conclude this epistle with another plea. Mr. President, our border areas within and the neighboring countries to Nigeria needs extra security to stop escapist remnants of terrorists infiltrating Adamawa state from other areas, especially from Borno state to create fresh problems in our state.

The border areas of Adamawa state on the axis of Borno  are prone to the risk of  penetration by residues of insurgents, now that soldiers have once more turned the heat against them in that state.

While you look at this angle, do also remember to explore a second possible solution by prodding Borno state Gov. Babagana Zulum to  necessarily and urgently engage the Borno State stakeholders in a deeper dialogue to quickly end their tacit support to the insurgency so that everyone  elsewhere  in the Northeast can have peace from insurgency. We did it in Adamawa state and it helped.

Mr. President, may Almighty Allah continue to bless you and Nigeria through these multiple crises. We are confident with your leadership and believe that Nigeria under the guidance of your purposeful Government shall also defeat and conquer the Coronavirus pandemic.

We appreciate your kind audience and anticipated action, Sir. Thank your very much and may bless Nigeria and Adamawa state.