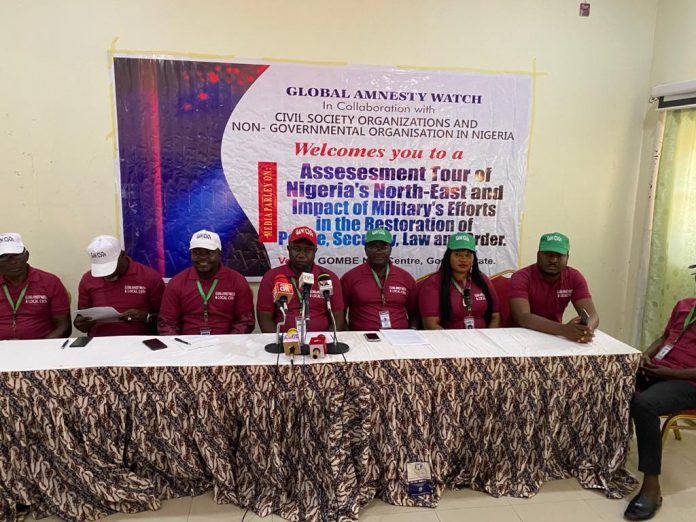 Following an end to Boko Haram hostilities and restoration of peace in Gombe State, the Federal Government and the state government have been applauded for resettling Internal Displaced Persons (IDPs) back to their communities.

The Global Amnesty Watch (GAW) gave this commendation in a communique at the end of its assessment tour round the state alongside local civil society groups.

In the communique signed by its team leader, Terrence Kuanum and released on Monday, GAW rated the state government high in its efforts to complement the successful clearance operation of the military.

Gombe was at the thick of things during the peak of the Boko Haram crisis between 2013 and 2014, with hundreds killed and thousands rendered homeless.

In December 2014, a bus station bombing in Gombe city left more than 27 persons dead and over 60 injured.

However, the state has witnessed a new lease of life in the last five years.

The GAW said after transversing the entire state in 14 days, it observed that peace has returned and IDPs are now back to their communities, living normal lives.

It added that the military through combat operations and surveillance effectively chased away the insurgents and secured the liberated communities.

The group also showered praises on the state government for swiftly resettling IDPs.

According to the GAW, the recent donation of land by the state government for the building of army barracks and others such gestures are welcomed.

The GAW also commended President Muhammadu Buhari’s administration for “freeing millions of people from the hands of terrorists and restoring their hope in Nigeria by returning them to their communities”.

It added that the ” Buhari administration has been a source of blessing to thousands of communities in Gombe State and the media and CSO’s should not fail to mention that as a way of encouraging the administration to do more.

GAW, however, suggested the need for global vigilance across the state to sustain the peace.

It further called on other state governments having similar security challenges to learn from the Gombe.