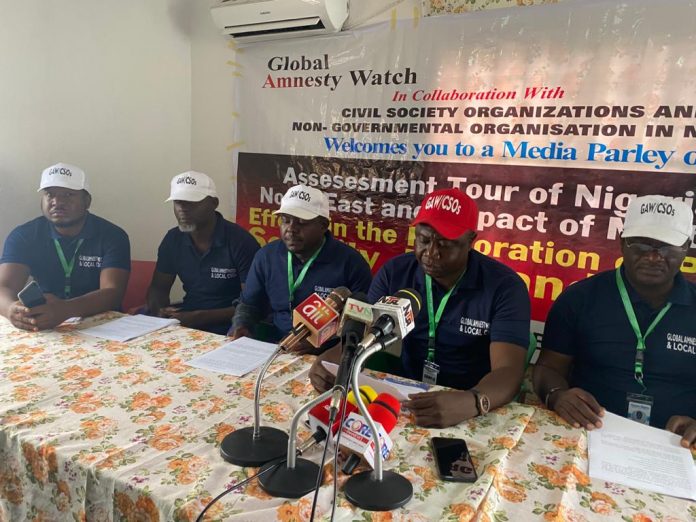 The Global Amnesty Watch (GAW) says the combined efforts of President Muhammadu Buhari and the Biu Emirate is responsible for the relative peace and tranquillity being enjoyed in most parts of Borno State.

The GAW said it came to this conclusion after embarking on an assessment tour of the state together with civil society groups and non-governmental organisations.

Biu, a former stronghold of Boko Haram terrorists have witnessed a new lease of life in the last five years.

Speaking at a press conference on Tuesday in Biu, GAW’s team leader, Terrence Kuanum said the group has noted with satisfaction the efforts of the President Buhari-led administration in restoring security to the country particularly the northeast and undertook the trip to various states to engage stakeholders and civil society groups on the need for sustainable peace in the country.

Whilst applauding the Biu Emirate in Borno for its contribution to peace and timely end to the Boko Haram crisis, Mr Kuanum said the GAW and other CSOs are impressed with the speed of development taking place in the various towns, villages and chiefdoms that make up the Biu Emirate and by extension Southern Borno despite disruptions caused by the insurgents.

The group, however, urged other Emirates not only in the northeast but the country as a whole to emulate them.

“From our findings, it was gathered that peace and tranquillity have effectively returned to Southern Borno with the efforts of the Nigerian Military. Community life has returned with farming and other activities taking shape. It was also observed that most of the communities that were deserted in the thick of the Boko Haram crisis had been fully liberated,” the statement reads in part.

” We also state that there is a strong presence of measures in place to forestall the infiltration of Boko Haram insurgents. The various traditional institutions in place in these communities are running at an optimal level, and it was observed that government activities are also running without any fear.

” From interactions with stakeholders in the various communities that straddle Southern Borno, it was observed there is an improved level of cooperation amongst the various institutions of authorities in the communities in Southern Borno State and this is occasioned by the efforts of the Nigerian Military in boosting the confidence of the people to return to their communities.

” It was also observed that investors’ confidence has been restored in Southern Borno and this has witnessed an increment of activities centred on farming and other commercial activities that were hitherto abandoned in the wake of the Boko Haram crisis as the people now enjoy relative peace and tranquillity as there are no further threats to lives and properties in any part of Southern Borno Senatorial District. It was also observed that massive construction works are ongoing, and people have returned home to their daily activities.

” It was observed that there are various efforts at peacebuilding and administration of Justice in various communities that were assessed. This is quite commendable in the sense that it has brought about a sense of collectivism in communities and towns visited. From interactions from locals and other stakeholders, it was stated that the Nigerian Military has initiated mechanism for peacebuilding and the administration of justice by ensuring that the necessary conditions are in place for a smooth and effective return to normalcy”.

The GAW, however, urged all stakeholders to collaborate as the “peacebuilding process is a collective responsibility that must be embraced by all at wards, local government and state levels in Borno State. All stakeholders in Borno State must join hands with the governor of Borno State Babagana Zulum on the need to support the Military in its quest for the return of normalcy to Borno State”.

It further advised the various stakeholders in Borno to join forces in calling on the Boko Haram terrorists to lay down their arms towards bringing about the much desired long-lasting peace in Borno State.

“The Global Amnesty Watch wishes to conclude that from its assessment of the situation of things in Borno State, that indeed there is relative peace and tranquillity in most parts of Borno state, but for a few areas where Boko Haram attacks have been pronounced,” the statement added.

” This is indeed a welcome development and an indication that with the commitment of the relevant stakeholders in Borno State, the activities of Boko Haram terrorist would be addressed adequately”.