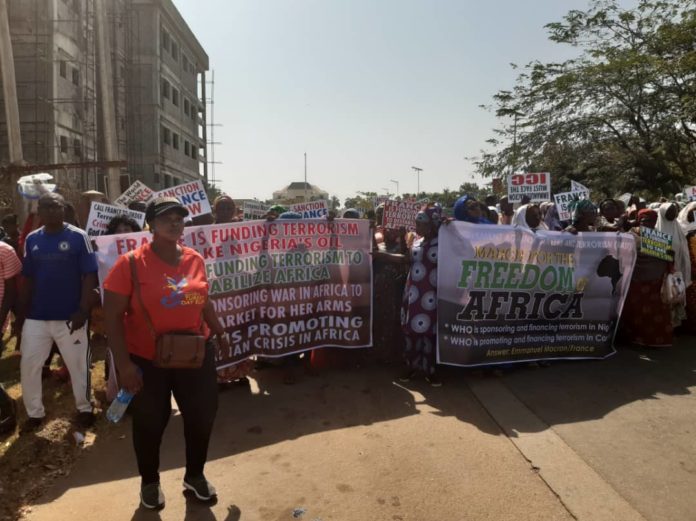 The Movement Against Slavery and Terrorism (MAST) has alleged that France President, Emmanuel Macron is sponsoring terrorism in Nigeria and other African nations. The group asked him to stop.

The Pan-African group made their voices heard on Wednesday at the end of a one-day walk to the French embassy in Abuja, Nigeria’s federal capital city.

The protesters in their hundreds demanded that the French authorities must end ties with Boko Haram/ISWAP terrorists which it has routinely armed.

Addressing the media in front of the French consulate, convener, Princess Ajibola said the mission was to get Macron’s attention that Nigeria is a sovereign nation and any attempt to compromise its territorial integrity would be resisted.

According to madam Ajibola, the group has overwhelming evidence to back its claim that the European nation is indeed behind the recent upsurge in terrorism in the country.

The group reckoned the French action is born out of greed – hinged on economic benefits owing to the avalanche of economic resources in the North-East, particularly the Lake Chad Basin region.

The Movement Against Slavery and Terrorism, therefore, warned the French authorities to desist from further mischief which has undermined the remarkable gains of the Nigerian Army.

The group also called the attention of the United Nations to the crime against humanity being perpetrated by Macron.

Ladies and Gentlemen,
This is a protest for the rescue of the soul of our dear country Nigeria from the forces of evil that have attempted to cause disharmony and disintegration by covertly sponsoring the activities of terrorists in Nigeria.

We embarked on this protest march to send a powerful message to the French authorities that Nigerians are indeed aware of its nefarious activities with regards to the ongoing war against terrorism in North-East Nigeria.

The Movement Against Slavery and Terrorism as a civil society organization decided to take our protest to the French Embassy in Abuja, so the message could be relayed to the French Authorities wherever they are that Nigeria is indeed a sovereign country and as such any form or attempt to compromise our territorial integrity would be resisted wholeheartedly.

Since 2015 when the present administration assumed leadership of this country, there has been tremendous progress recorded in the fight against the Boko Haram terrorist group. So much so that Nigerian troops captured their operational headquarters (Camp Zero) in Sambisa forest to the glory of God.

It didn’t stop there; the Nigerian troops also recaptured the over 16 local government areas in North-East Nigeria that were once under the control of Boko Haram terrorists. By and large, the Boko Haram group was decimated and fled in their droves to the fringes of the Lake Chad Basin region, from where they launch an attack on soft target communities within that vicinity.

We are aware that some vested interest was not happy with the gains made by Nigeria in the fight against terrorism. As such, they began providing logistic support under humanitarian cover to the Boko Haram fighters.

They also assumed the role of the mouthpiece of the Boko Haram terrorist group. They used their state medium to promote their nefarious activities and to give them the needed psychological boost.

The Movement Against Slavery and Terrorism wishes to state in unequivocal terms that France is indeed responsible for the resurgence of Boko Haram attacks in Nigeria in recent times because there is overwhelming evidence that it has been selling arms and ammunitions to the Boko Haram terrorist group. These arms come into the country through the francophone countries.

We also wish to send this message to the President of France, Emmanuel Macron, that what France is doing under his watch is indeed a crime against humanity. As such, it must, as a matter of urgency, desist from spreading terrorism in Nigeria and the African countries.

The Movement Against Slavery and Terrorism sees the actions of France as an assault on our sovereignty as a country. This is indeed despicable and must be condemned by all and sundry.

We are also aware that the actions of France are hinged on economic benefits given the avalanche of economic resources in North-East Nigeria, particularly the Lake Chad Basin region.

This is indeed an attempt at recolonization, which by all standards is puerile and won’t stand the test of time because Nigerians would resist every move with passion.

The Movement Against Slavery and Terrorism is by this protest asking the French authorities to desist from their evil ways or face the full wrath of Nigerians who are ever ready to protect the sovereignty of the country.

The Movement Against Slavery and Terrorism is also by this protest informing the relevant authorities in Nigeria to act in the best interest of Nigeria as it would indeed be a slap on our faces should we allow France to carry on with its destabilization plot on Nigeria.

The Movement Against Slavery and Terrorism is also calling on the United Nations to investigate the role of France in the spread of terrorism in Nigeria and Africa.

The Movement Against Slavery and Terrorism is indeed saying enough is enough, and France must stop the distasteful support it has been extending to the Boko Haram terrorist group in Nigeria, which is aimed at making Nigeria erupt in flames.

The Movement Against Slavery and Terrorism wishes to inform the President of France, Emmanuel Macron, that the world is indeed watching closely and should the French authorities not halt the spread of terrorism in Nigeria, the day of reckoning is indeed near.