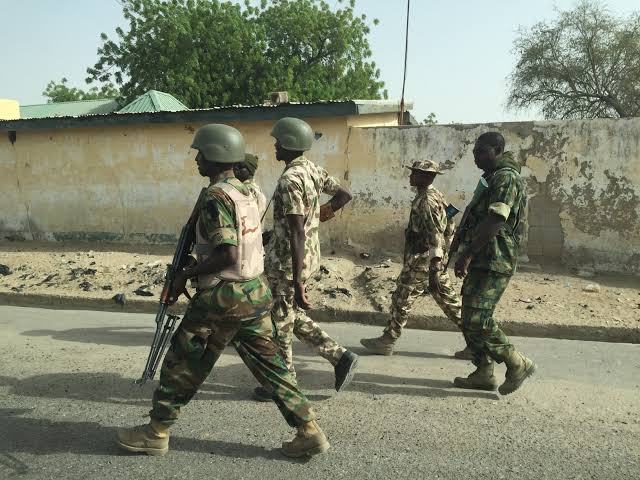 In September 2014, the Jonathan Presidency served a pyrrhic victory to Nigerians over claims that it has killed Boko Haram’s most vicious leader, Abubakar Shekau. The public statement excited Nigerians, but sadly turned out to be a ruse like previous such claims in July 2009 and another in late June 2013.

The then Defence spokesman Chris Olukolade told reporters in Abuja that the man posing as Boko Haram leader Abubakar Shekau was his moniker adopted by the sect. He insisted that Shekau had been killed earlier during a gun battle with troops. And the military played some videos to back up the fake claims.

To the military, it was another Islamist fighter, who was scoring the shots as replacement for Shekau. They identified him as Mohammed Bashir, claiming he posed as Shekau’s moniker and responsible for recent threats videos in the guise of the real Shekau , but was also killed in clashes at Konduga.

Olukolade said “Bashir had been acting or posing as the deceasedAbubakar Shekau…the eccentric character known as the leader of the group”. But the Military could not explain convincingly how it killed Shekau. It was indisputably fake claims. Abubakar Shekau was alive, hale and hearty, providing leadership to insurgents.

Therefore, in early January 2015, Nigerians were scared stiff. Shekau, the Boko Haram leader, morphed into a berserk monster, threatening Nigerians and its government to prove he is alive and counter the military’s claims that he is dead. Shekau appeared in a 15-minute recorded video and pledged to disrupt the 2015 general elections scheduled for February 16, 2015 at “any cost.”

Shekau vowed in Hausa language in a message released through the sect’s Twitter account; “This election will not be held even if we are dead.” These potent threats from the leader of Boko Haram to disrupt the general elections, one of Nigeria’s most important national events caused stir and made the Jonathan Presidency apprehensive. The government was forced to postpone the elections by six weeks to enable troops dislodge insurgents from their strongholds in Northeastern Nigeria.

But the feeble action of government angered, rather than appease Shekau, who backed his threats by unleashing deadly attacks on communities in the Northeast. Twine suicide attacks on the same day, the video was released, sniffed life out of 38 persons. And the string of bombings continued as on February 15, 2015, as a female suicide bomberkilled at least 10 passersby in a local market in Borno.

It was the extent Shekau and Boko Haram terrorists held Nigeria hostage in braggadocio, mindless bloodletting and carnages. This was before President Muhammedu Buhari was elected the democratic leader of Nigeria. He also vowed to blight the fire of Shekau and his bloodsucking sect.

And keen observers of the operations of Abukakar Shekau would concede that the terrorists leader had a style of asserting his authority. He was in the habit of consistent video appearances to either raise fresh controversies, brag about his might and exploits/atrocities or convey his satanic messages.

Under Shekau’s command, Boko Haram was expansive and virile to the extent it annexed Nigerian territories; named Gwoza and Bama in Borno as headquarters and its subsidiary of the sect’s Caliphate respectively. Its atrocities and horrendous attacks drenched Nigerians in endless tears and sorrows.

However, under the Buhari Presidency, Boko Haram has been decimated and defeated. The COAS and leader of the counter-insurgency operations, Lt. Gen. TY Buratai and troops have been able to run Abubakar Shekau out of relevance. It is quite curious that in the last two years, Shekau nor any moniker has not appeared in any public video issuing threats or bragging or claiming responsibility about gruesome killing and abductions.

Pertinently, at the end of October 2019, a tragedy hit the Islamic State of Iraq and the Levant (ISIL or ISIS). Its leaderAbu Bakr al-Baghdadi was killed in a US military operation in northwest Syria. Again, the ISIS spokesman Abu al-Hassan al-Muhajir and a close aide to al-Baghdadi was also killed in a joint US operation with Kurdish forces in the northern Syrian city of Jarablus hours after al-Baghdadi’s death.

Both US President Donald Trump and the ISIL’s legislative and consultative body have confirmed the deaths of these two terror kingpins. It is a sad moment in the terrorists’ world globally, as humanity and governments rejoices.

The statement read in part; “We mourn you … commander of the faithful…Do not rejoice America. The new chosen one will make you forget the horror you have beholden … and make the achievements of the Baghdadi days taste sweet.”

“The Islamic State shura council convened immediately after confirming the martyrdom of Sheikh Abu Bakr al-Baghdadi, and the elders of the holy warriors agreed on a replacement,” al-Qurayshi stated.

America has designated Boko Haram as a terrorists group. US also placed a $7 million reward for Shekau’s capture as part of its rewards for Justice programme, after its designation of Shekau as a “global terrorist.”

Shekau had thundered in a video message; “We announce our allegiance to the Caliph of the Muslims … and will hear and obey in times of difficulty and prosperity, in hardship and ease, and to endure being discriminated against, and not to dispute about rule with those in power, except in case of evident infidelity regarding that which there is a proof from Allah.”

Therefore, the tragedy which rocked ISIL, the global headquarters of terrorism, as manifest in the killing of two principal leaders, ought to have shuddered Shekau enough to release another video. He would have proudly staged out to express condolence to his martyred lords, threatening Nigerians with reprisals and upping the tempo of atrocities. Shekau has no strength to even congratulate his new terror chief, Abu Ibrahim al-Hashimi al-Qurayshi. Its abnormal that weeks after the incident Shekau or anybody acting at his behest has summoned the courage to mouth out in lashings or comments about the new order in ISIS.

No sign which has potently conveyed the fall of Boko Haram’s Abubakar Shekau more that the unusual silence over the deaths in ISIL’s headquarters. It is an incontrovertible admission of the final eclipse of Shekau and Boko Haram, a trajectory laid for them by Gen. Buratai.

Gen. Buratai’s reclamation of all the Nigerian territories annexed by Boko Haram in the Northeast; the incapacity of insurgents to retake the freed local government areas, including Gwoza and Bama and troops stoppage of recruitments of vulnerable youths into the sect’s fold as foot soldiers have been serious setbacks for Shekau and his incensed terrorists.

Furthermore, Gen. Buratai’s December 2016’s demystification of Sambisa forest, which provided protective shield for Shekau and his army of terrorists have been a great setback to the operations of Boko Haram and Shekau. As precursor to the final conquest of Sambisa forest, the Army had overran four Boko Haram camps in the Sambisa, where over 300 female hostages were freed in April 2016. The Army presented captured Sambisa forest as Christmas gift to Nigerians on December 24, 2016.

In addition, the overwhelming flooding of troops in the Northeast has been another weakening nightmare for insurgents and Shekau. The relentless and consistent pressures mounted on insurgents in the frontlines for months and years, coupled with eagle-eyed surveillance forced Shekau into an effeminate disappearance from the battle turf, dressed in hijab and disguised as a woman to evade arrest.

That last encounter with troops two years ago reportedly left Shekau fatally wounded, (if not dead) and fatigued. Months later, a Boko Haram commander, Abdullahi Bello (alias Abu Zainab), who was arrested by the Army in Bauchi revealed that Abubakar Shekau veiled himself and sneaked out of Nigeria on bush paths to Kolofata in neighbouring Cameroun. It was his historic fall, as Shekau is a new permanent guest of birds and reptiles in caves and mountains’ of Cameroun.

Shekau is forced to bow out of “active” service and the residues of his lieutenants still parading the fields have not found it easy either. Gen, Buratai and Nigerian troops are not giving them a chance to breath. Clearance operations is fetching out a lot of the remnants of terrorists from far-flung hideouts.

It is unthinkable that Shekau and Boko Haram insurgents would ever again have the chance to attack and massively massacre Nigerians in a manner reminiscence of the January 3-7, 2015, insurgents tragic invasion of Baga, where they slaughtered over 2,000 Nigerians. Shekau has become an inevitable history in Boko Haram terrorism, courtesy of President Buhari and the leader of counter-insurgency operations, the irrepressible Gen. Buratai.