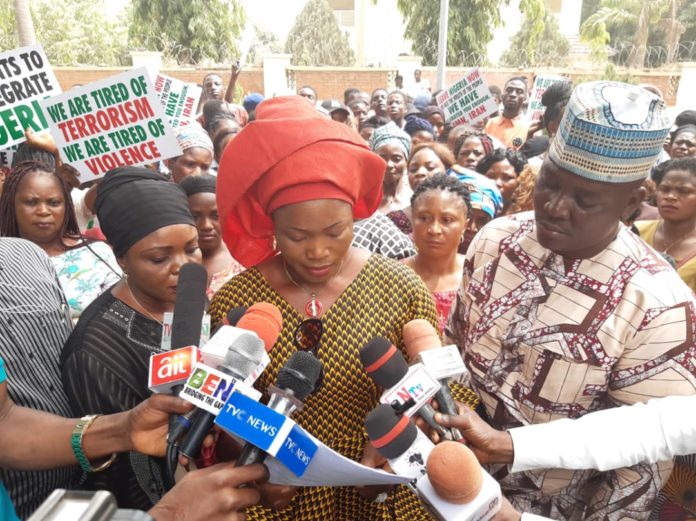 A group of Nigerians, on Monday, stormed the Iranian Embassy in Abuja, calling for the country’s nationals to leave its shores.

Led by the Concerned Citizens for Defence of Nigeria, the protesters demanded the immediate expulsion of Iranians and their “agent of darkness” from Nigeria.

In a statement by Convener, Mrs Victoria Ameh, the Concerned Citizens said the rally is necessitated by Iran’s fresh attempt at causing havoc in Nigeria through their proxy, the Islamic Movement in Nigeria (IMN).

Formed about four decades ago, IMN advocates the creation of an Iranian-style Islamic state in Nigeria.

It was heavily influenced by the Iranian revolution, which saw Ayatollah Khomeini take power in 1979 after the overthrow of the US-allied Shah in a popular uprising.

The Concerned Citizens revealed that the Iranian government have pumped in millions of dollars in a bid to destabilize and overthrow the Nigerian government.

According to the group, “Iran would stop at nothing until they achieve their desire to see to the collapse of Nigeria, and this is what Nigerians in their numbers have come out to reject in its entirety.”

It further added that the latest move stems from the fact that Nigeria, just like many other countries didn’t take sides with it over the diplomatic row it had with the United States of America over the killing of one of its top military commander, Gen. Qasem Soleimani in Iraq.

“Nigerians say NO to the clandestine attempt by Iran to truncate our democracy.”

We, the members of the Concerned Citizens for the Defence of Nigeria, are gathered here today to send a strong message to the Iranian authorities in the light of the various revelations concerning how they have been plotting to see to the disintegration of Nigeria to suit their despicable purpose.

We are here, not because we do not have other engagements. But it is indeed a statement of fact that above all and in pursuit of our core mandate as an organization devoted to the defense of Nigeria from external sources through advocacies and civil means brings this strong message on behalf of the over 180 million Nigerians who do not have anywhere to call home but Nigeria to the Government of Iran.

The Government of Iran has indeed exhibited an act that is not only despicable, shameless, but of poor taste, because it has indeed begun a futile attempt at causing havoc in Nigeria through their proxy, the Islamic Movement in Nigeria (IMN).

The activities of the IMN in Nigeria are indeed one laced with tales of violence and affront to the constituted authorities in Nigeria with the active support of the Government of Iran. They have killed and maimed innocent people. They have constituted themselves into a parallel government, and they have indeed planned to establish their territory in Nigeria without recourse to the provisions of the Constitution of the Federal Republic of Nigeria.

As we all know, the activities of the IMN is fully sponsored by the Government of Iran from time immemorial. They have sponsored the violent activities of IMN against other peaceful practicing Muslims that do not share in their extremist ideology that has resulted in deaths and incapacitation.

One of the contemptible acts of the IMN was the attempted assassination of the Chief of Army Staff in Nigeria, where his entourage was ambushed on his way to an official function in Zaria-Nigeria. Also, the IMN has held violent protests in some parts of the country, especially the Federal Capital Territory-Abuja that led to the death of a senior police officer and many more deaths.

We know that the Government of Iran would stop at nothing until they achieve their desire to see to the collapse of Nigeria, and this is what Nigerians in their numbers have come out to reject in its entirety.

The Government of Iran should know that Nigerians are not fools. That we have been diplomatic in our conduct all the while is not a sign of weakness. But rather that of strength in our diversity for we are good people of a great nation.

We wish to state that despite their shenanigans, we have continued to respect Iran as a sovereign country. And we expect that such gestures should be reciprocated. But instead, they have chosen the path of dishonor to cause mayhem in Nigeria through their proxy, the IMN.

We believe that this new onslaught by the Government of Iran stems from the fact that Nigeria, just like many other countries refused to take sides with it over the diplomatic row it had with the United States of America over the killing of one of its top military commander, Gen. Qasem Soleimani in Iraq.

That Nigeria refused to back its atrocities in the international community is why the Government of Iran has vowed to take its pound of flesh with the renewed onslaught against Nigeria by infiltrating the country with mercenaries to destabilize the country manifest in the spate of kidnappings and other despicable activities that are threatening the peace and tranquility in Nigeria.

The Government of Iran is also the brain behind the violent protests across the country with the ultimate aim of causing economic and political unrest. They have set aside vast sums of monies in the regard as well as the deployment of sophisticated arms and ammunitions to the IMN group in Nigeria.

The Concerned Citizens for the Defense of Nigeria sees this act as an affront to the sovereignty of Nigeria, and this gathering is one amongst many civil means we intend to use to send a strong warning to the Government of Iran and their agents in Nigeria to desist from their evil ways or face the full wrath of Nigerians.

We are demanding that the Government of Nigeria begin the process of identifying all the channels through which Iran has been promoting terrorism in Nigeria through its proxy, the IMN.

We are also demanding that the Nigerian government begin the process of identifying all the interests of Iran in Nigeria and consequently activating the relevant machinery towards expelling them from Nigeria as Nigerians are not fools that would sit and watch how another country would destroy our country.

This is necessary in the light of the fact that it has been established with facts that the mission of the Government of Iran is to see to the collapse of Nigeria so that their proxy, the IMN can successfully establish their caliphate.

The generality of Nigerians are united in this accord to see that Iranian officials and businesses leave Nigeria in the interest of peace as Nigeria is not a part and would never be an annex of Iran through which they can import their extremist ideology to the African continent.

The territorial integrity of Nigeria can be shaken. However, it can never be broken because we are a strong and united country. This much we want to pass across to the Government of Iran in faraway Tehran. Iran cannot truncate the nascent democracy in Nigeria under any condition. We say no to this, and we also reject it in its entirety. This is indeed the time for Iran to leave Nigeria.

We are resolute on this call because Nigeria is indeed for Nigerians and not for Iran. As such, we refuse to be susceptible to their whims and caprices. A word is indeed enough for the wise and discerning, for we shall not extend any form of respect for any country that does not respect the sovereignty of Nigeria. Nigerians say NO to the clandestine attempt by Iran to truncate our democracy.