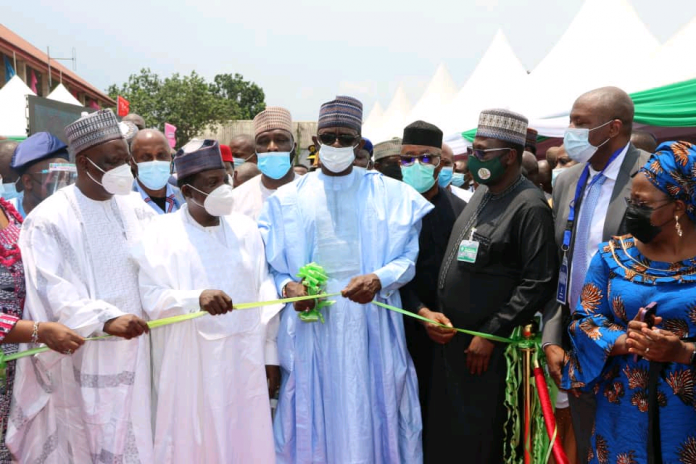 The President is hopeful the project will reactivate economic activities along the Eastern corridor.

Buhari who stated this virtually during the event that held in Port-Harcourt, Rivers State added that the completion of the project would berth activities that serve as a stimulus for industry and trade.

The project will include new extensions and facilities, the construction of Bonny Deep sea Port, and Railway Industrial park.

He said, “The Port Harcourt – Maiduguri railway will translate to reactivation of economic activities along the Eastern corridor, which has been greatly affected by insurgent activities and serve as a stimulus for industry and trade.

“The connection of the railway to a new seaport in Bonny Island and Railway Industrial Park, Port Harcourt is designed to increase the viability and boost transshipment of cargo and freight locally, across the West African sub-region and in the Continental Free Trade Area,” said Buhari

The 2044.1km Port-Harcourt to Maiduguri narrow gauge railway reconstruction project
which cost $3.2 billion according to the president, will have new branch lines to Owerri, Imo State and Damaturu, Yobe State.

This Mr. President said the bringing of new line is line with the objective of resuscitating the once vibrant railway transportation in the Eastern railway corridor of the country.

” We are further expanding it to achieve contemporary demand for transport in the North East and Southern geopolitical zones of the country. It is also designed to link other standard gauge rail lines under construction through the provision of transshipment centers. The funding of the railway is through loan to fund 85% project cost and the Federal Government contribution of 15% as counterpart funding.

“The second and the third projects are the Bonny deep sea port and a Railway Industrial Park, Port Harcourt that are to be constructed through direct investments by our Chinese partners and international financing agencies,” explained Buhari.

President Buhari therefore urge all Nigerians especially industrialists, manufacturers and businesses within the zones to take maximum advantage of the infrastructure in planning for expansion and building new factories to join in raising Nigeria’s economy to the global stage and reaffirm our leading role in Africa.

The Minister of Transportation, Hon. Chibuike Amaechi, in his address said the Eastern narrow gauge railway is one of the transport infrastructure established in the pre-independence period and played a significant role in the development of agriculture and industrial sectors in the colonial era and immediate post-independence year up till 1985, when it became unfit for purpose as a result of the general neglect and divestment suffered by the Nigerian.

Amaechi revealed that the project would be partly financed by loan from a syndicate of Chinese financiers, and with a 15% counterpart funding from the Federal Government.

Some of the dignities at the ground breaking include Minister of Information and Culture Alhaji Lai Mohammed, Minister of Science and Technology, Dr. Ogbonnaya Onu, Minister of Labour and Employment, Dr. Chris Ngige, Dr. Godswill Akpabio, Senator George Akume, Governor Lalong of Plateau, amongst many others.

The Port Harcourt– Maiduguri Eastern Narrow Gauge Railway when completed will run at 60–per hour, and 80-100 km per hour for freight and passenger respectively.