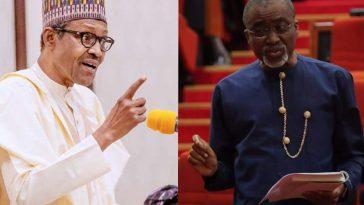 A socio-political movement in the southeast, Igbos in Nigeria Movement (INM) has disowned the lawmaker representing Abia-South Senatorial District, Eyinaya Abaribe, over his call for President  Muhammadu Buhari to resign from office.

The Igbo group made this known on Thursday at a press conference in Awka, Anambra State, in which it ordered the 64-year-old to resign and apologise to Nigerians.

In a statement jointly signed by Mazi Ifeanyi Igwe and Paulinus Ozoani, its President and Secretary General respectively, the Igbos in Nigeria Movement expressed utter disappointment and disapproval of Mr Abaribe’s utterances.

According to the group, this isn’t surprising as Mr Abaribe’s stature already suffered a big blow after his hobnob with terrorist leader, Nnamdi Kanu.

INM further revealed that the lawmaker and some of his allies may infact be behind the supposed insecurity situation and are only trying to create the impression that Mr. President is not delivering on his promise.

The Igbo group, therefore, disowned Mr Abaribe who they described as a “ trader masquerading as the people’s representative in the Senate”.

While ordering the lawmaker to resign and apologise, INM, however, urged Nigerians not to be misled by Abaribe as his position doesn’t represent that of the region.

The Igbo in Nigeria Movement is disappointed by the decision of the Senator representing Abia-South Senatorial District, Senator Enyinnaya Abaribe, to abuse the sacred mandate of his constituents with his call for President Muhammadu Buhari’s resignation over the security challenges the country is grappling with.

Senator Abaribe’s tirade against the president, for that was all he did, is nothing but a cheap grandstanding by a man who is desperate for political rehabilitation after his stature was diminished by his decision to hobnob with terrorist leaders, Nnamdi Kanu.

It is disingenuous of the supposedly distinguished Senator to pretend that President Buhari’s administration did not successfully chase terrorists from major cities leaving them to only operate from beyond Nigeria’s borders with the incursions they make into Nigeria’s territory.

We also challenge Senator Abaribe to deny that the other security breaches like kidnapping and banditry are not connected with the activities of his co-travellers in the opposition, who sponsor such criminality in order to create the impression that Mr. President is not delivering on his promise to keep Nigeria secured.

Our expectation was that Senator Abaribe would have used the time allotted to him in debating the motion tagged, ‘Nigerian security challenges: urgent need to restructure, review and reorganize the current security architecture’ by Senator Abdullahi Yahaya, in a better manner. He should have for instance called on his party, the People’s Democratic Party (PDP) to cease fire in the war of attrition they are waging against Nigeria.

It is on record that while waging this war on behalf of his party, Senator Abaribe is a major contributor to the insecurity in the country through the sponsorship and arming of the designated terrorist Indigenous People of Biafra (IPOB) group in the south east for many years. He demonstrated his deep connection with the group when he stood surety for its leader, Mazi Nnamdi Kanu who had put the country on fire of unimaginable proportion.

He even went as far as using his office, alongside fellow terrorist sympathizers, refused to grant approval for Mr. President to secure the loan needed for the purchase of arms and ammunition to fight remnants of  the terrorists.

Of course, they had expected that the terrorists would have decimated Nigeria by now not knowing that the Nigerian military will rise to the challenge.

The Igbos in Nigeria Movement decided to take Senator Abaribe to task so that his misguided position will not be misconstrued by patriotic Nigerians to be the collective decision of the south-east geo-political zone or that of the Igbo nation.

We shall never align with what is criminal or evil, so it becomes necessary to disown this trader masquerading as the people’s representative in the Senate.

We consequently demand that Senator Abaribe resigns from the Senate since he has proven himself to be a misfit who is not qualified to speak on the floor of the Senate. In addition to resigning, he should apologize to Nigerians for his unnecessary tantrum.