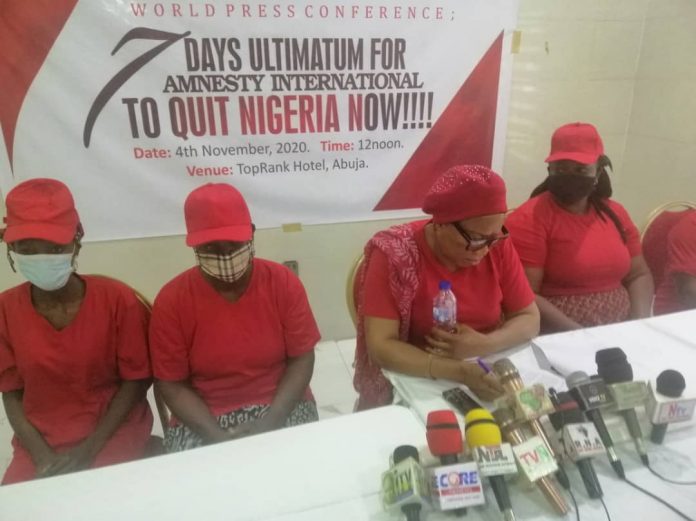 The group which made this known at a press conference on Wednesday in Abuja accused the international body of “peddling fake news which almost plunged the country into anarchy during and after the EndSARS protests.”

Speaking on behalf of the group, Executive Director, Princess Ajibola said Amnesty International amplified the claim that 78 persons were killed at Lekki toll gate even without any tangible proof.

According to Ajibola, the consequence was an arson which paralyzed Nigeria’s economy with many businesses destroyed and dozens of policemen killed.

Worse still, Ajibola lamented that Amnesty has continued on this path, hampering the rehabilitation efforts of the government.

The centre, however, noted that the human rights group must depart the country before the nation can begin to rebuild.

CALSER, therefore, handed AI a seven-day ultimatum to leave, cautioning that failure do so will attract civil disobedience at its offices in Abuja and Lagos.

It further warned that “Amnesty International’s offices and those of all its affiliated organizations and known supporters in Nigeria will be set upon the same way that its agents destroyed critical assets in the country. Its staffers will be treated the same way that innocent policemen lynched by mobs were treated”.

Gentlemen and ladies of the press, the Centre for Africa Liberation and Socio-Economic Rights (CALSER) welcome you to this press briefing, one of our interventions since the start of the #EndSARS protests that have now been hijacked, repurposed and deployed as a destructive force by individuals and organizations that do not mean well for Nigeria.

By way of a quick clarification, CALSER is not opposed to genuine, legitimate and orderly protests against the incidence of brutality and human rights abuses irrespective of who or what the offending entity is. Our members had taken part in the peaceful protests to demand a cessation to arbitrary profiling and abuse of individuals by the defunct Special Anti-Robbery Squad (SARS), whose operatives harassed Nigerians without end.

We were surprised but gladdened when the Federal Government accepted the original five demands without the expected stonewalling or delay tactics. We had hoped that the 5for5 would open the way for the government to implement the first round of reforms after which Nigerians would have again delivered the demand for more reforms, not just in the Nigeria Police Force but in other spheres of the national life, all of which are indeed in need of rejigging.

Our shock was consequently profound when infiltrators took over the protests, raise the demands to seven, 12, 20 and eventually 23 before they drafter thugs in to attack those of us that originally began the agitation. We were shocked even further when celebrities and paid activists not only became prominent in the protests but also used their standing as persons with a large following on the social media to incite people to violence.

Things degenerated quickly after that. From protests that initially focused on relevant locations like key government offices of interests like the police headquarters, we got to a point where protesters were railroaded into obstructing shared infrastructure like major roads that threw other Nigerians into hardship. Even people with life-threatening hospital emergencies were unable to commute to access healthcare. We are still trying to verify how many people died from these irresponsible tactics.

We still feel scammed that protesters unwittingly ended up as human pawns. As part of the protests movement, we have reviewed the video footages shared by colleagues at Lekki Toll Gate in Lagos state. The incident at that location Tuesday, October 20, 2020, opened our eyes to the reality that we were manipulated to joining with people who would have willingly shot us or any other group that has joined the protest just so they can have corpses to display. Thankfully, things did not get to that stage before we found out that we had been in bed with the enemy.

Yes, soldiers shot into the air at Lekki Toll Gate. But, no, we did not witness any massacre neither did we see any, not one, of the 78 people that the protesters used social media to mislead the world into believing were killed. The vehemence with which falsehood was peddled about the so-called massacre is what alarmed us that our members or any other Nigerians present at that protest location might have been killed if those behind the fake news of Lekki massacre had the slightest inkling that they would come under scrutiny and their misleading claims subjected to fact-checking.

We had engaged in a lot of introspection in our attempt to understand why protesters, who claim to be interested in a new and better Nigeria, will resort to launching a coordinated attack of fake news on their own country. The only reassurance we gave ourself is the knowledge that these people will live in chaotic Nigeria they were trying to create since they will live with the consequences of the lawlessness they tried to create.

We do not, however, find such logic in why Amnesty International, an international NGO, with a serial history of weaponizing fake news and publishing jaundiced reports about Nigeria, will deploy disproportionate resources to undermining the integrity of Nigeria even at such a trying time. The protesters might have made the misleading claim of a massacre at Lekki Toll Gate and the lie that 78 people were killed, but it took Amnesty International’s amplification of that lie for the international community and supra-national organizations to wrongly accuse and condemn Nigeria and its government.

Shockingly, this credibility challenged organization has continued to amplify the fake news it earlier published. We have seen Amnesty International’s operatives running the circuit in media houses to continue advancing the claim that there was a massacre. Yet, when Amnesty International Nigerian chief representative, Osai Ojigho was asked on Arise TV by the anchor, Charles Aniagolu, what the NGO’s evidence was she failed to provide a single shred of evidence. She was asked for evidence that any person had been shot by the Nigerian army at Lekki Toll Gate, and she spectacular failed to substantiate the claims she and her organization are still making without proof today:

Charles asked her, ”Do you have any bodies?”  Silence. ”Did you SEE any bodies of any dead victims?”  Silence.  ”Do you have any names of people that were killed, even ONE name?”  Silence.  ”Have you been contacted by even ONE family that claimed they lost a loved one?”  Silence. Ojigho then began saying ”oh well, the army has a history of shooting people and then taking away their bodies and hiding them etc”, to which Charles Aniagolu retorted, ”Sorry madam, but THAT is NOT evidence of anything. Can you come back to us when you have REAL evidence of an atrocity committed by the Nigerian army at Lekki?”

We have waited for several days and Amnesty International has not gone back to Arise TV and Charles Aniagolu with evidence that the Army killed anyone. It has instead ramped up its fake news and has further undermined security in Nigeria in addition to the wave of arson and looting that its lies against the Nigerian authorities had triggered. That wave of arson threatened the Nigerian economy. The mob that was incensed on account of Amnesty International’s lies killed dozens of policemen in different cities of the country.

This tradition of lying is not new to Amnesty International. In 2015 it issued a fictitious report, in which it faked interviews and witnesses to taint the Nigerian Army. Like its outing on Arise TV, it has not been able to substantiate any of the lies it told in the past. So it is out now trying to destabilize Nigeria with the same strategy that failed in t

Even the measure of peace and stability that returned is now under threat as the international NGO is doing its best to escalate its incitement and again fill the streets of Nigeria by people that have been made angry by fake news that was developed and unleashed by Amnesty International.

When we joined other Nigerians to protest against police brutality, we intended to demand a better country for ourselves, but not to begin killing policemen who are our fellow citizens. Our intention was not to destroy key institutions of our country like the Army, which is precisely what Amnesty International is attempting to achieve through the promotion of fake news.

Its refusal to desist from peddling these lies attests to its having a motive that is known only to those that gave it the assignment to compromise Nigeria and those working with it to achieve this evil agenda. It is a realization we cannot live with as patriotic citizens.

We want our dear country to begin rebuilding everything that has been destroyed in those days of violent protests when people could not filter truth from falsehood simply because they wrongly believed Amnesty International without realizing its larger agenda of destabilizing our country.

For Nigeria to rebuild, Amnesty International must be out of the way. CALSER, therefore, gives Amnesty International a seven-day ultimatum to leave Nigeria. The NGO’s failure to leave Nigeria will attract civil disobedience at its offices in Abuja and Lagos on a scale that will make the campaign of looting and arson it facilitated appear like child’s play. Amnesty International’s offices and those of all its affiliated organizations and known supporters in Nigeria will be set upon the same way that its agents destroyed critical assets in the country. Its staffers will be treated the same way that innocent policemen lynched by mobs were treated.

The countdown for the seven-day ultimatum has begun.