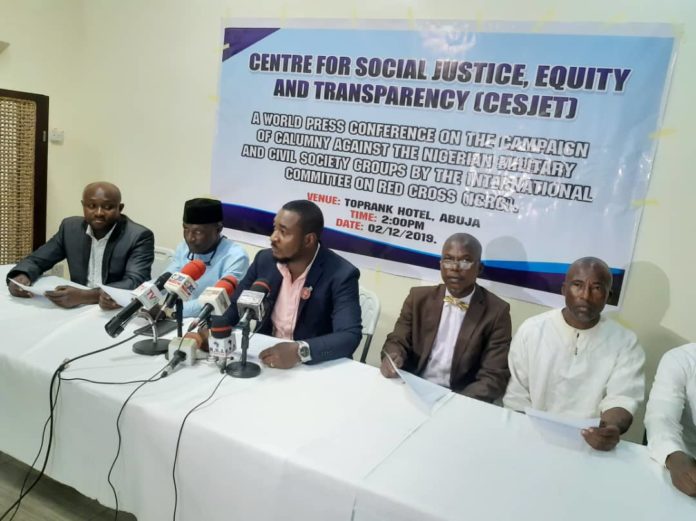 The Centre for Social Justice, Equity and Transparency (CESJET) has an existence, secret sponsorship and operation of a terrorist organisation in the southern part of the country.

CESJET, in a statement signed by its Executive Director, Comrade Ikpa Isaac, fingered another group, InterSociety for Civil Liberties & Rule of Law, to be behind the sect.

The centre said it came to this conclusion after “a thorough forensic investigation conducted by a team of experts.”

According to Ikpa, the group, in alliance with the proscribed Indigenous People of Biafra (IPOB) aims to plunge Nigeria into a crisis and bloodshed potent enough to compromise national security.

The centre also accused the group of being behind the violent bloodshed and arsons in Oyigbo in Rivers State.

It, however, charged the police, the DSS and all other relevant security agencies to keep an eye on Intersociety operations and IPOB Code members in the South.

The centre further urged Rivers State Governor, Nyesom Wike, to sustain his vigilance on the sect to protect lives and property.

The Centre for Social Justice, Equity and Transparency (CESJET) deems it expedient to alert Nigerians and security agencies in the country on the existence, secret sponsorship and operation of a terrorist’s organization in the Southern part of the country, especially between the Abia and Rivers state axis by the InterSociety for Civil Liberties & Rule of Law.

Albeit, whilst InterSociety operates under the banner and nomenclature of a human rights advocacy group. But on the contrary and in absolute discord with its publicized agenda, the group is an assemblage of persons supporting and promoting armed criminals, dubious elements, and questionable characters, which are actively plotting to cause anarchy and destabilize Nigeria.

A detailed forensic investigation conducted by a team of experts from CESJET incredibly discovered InterSociety’s alleged secret links and connections with some aberrant groups in Nigeria. These are grouped in connivance with external forces have nursed the evergreen agenda to ginger its members to plunge Nigeria into an overwhelming crisis and bloodshed potent enough to compromise national security.

InterSociety allegedly has a strong bond with IPOB, the proscribed or outlawed terrorists’ organization formerly run by its escapee leader, Nnamdi Kanu. This group launched bloody secession campaigners, indulged in extra-judicial killings, acts of vandalism, kidnapping for ransom, armed robbery and other violent crimes. It compelled the Southeast State Governments to proscribe it and the Federal Government of Nigeria (FGN) to declare it a terrorist’s organization. The decision was further rectified by a competent court.

But in an unexpected asinine twist, InterSociety has suspected and clandestinely revived, energized and armed members of the defunct IPOB. The sponsors of the resurgent IPOB have also slightly modified its name, which is now called “IPOB Code.”  The armed criminal gangs of the new group, IPOB Code are also predominantly found in Southeast states; but in the bid to divert attention, most of them have now migrated to Oyigbo community in Rivers state.

CESJET obtained from reliable sources that the regrouped members under IPOB Code have stockpiled large caches of arms and ammunitions in Obigbo. And from this position of criminal strength, IPOB Code members intermittently harass, intimidate and threaten innocent and law-abiding citizens aimed at their forceful conversion into the sect to further boost their numerical strength. Many have been their victims.

And with consistent financing of the activities of IPOB Code by InterSociety, which is also supported with funds from external sponsors, the new group has expanded unimaginably in the last few months. Nonetheless, the recruitment drive and its obnoxious operations have intensified to a frightening level, compelling Rivers State Governor Nyemsom Wike to issue repeated public warnings against their criminal activities in the state.

In the last couple of months, IPOB Code armed gangs have consistently terrorized Obigbo residents by instigating and promoting deadly cult clashes. Many have lost their lives in the process and it has marked Oyigbo as the most deadly and hottest spot of cult clashes in Rivers state.

Accordingly, when #EndSARS protests birthed and rocked some states in Nigeria, particularly in the Southern part of the country, the IPOB Code members seized the opportunity to exercise their murderous and terror instincts on people in the guise of protesting police brutality.

In a barbaric fashion, the masterminds videoed these murderous acts and celebratedly syndicated it on social media. Thereafter, InterSociety, which also serves as the intellectual and media arm of IPOB Code has launched determined and venomous propaganda against the Rivers State Governor and the Nigerian Army in the desperation to change the narrative in their favour.

A desperate InterSociety in the bid to seek public attention have coined bogus claims and fabricated narratives. The IPOB Code sponsors are claiming soldiers in connivance with Gov. Wike have sponsored massacres and abductions in Oyigbo merely to attract public empathy and draw the attention of the international community as façade to cover-up the perpetrated evil and crimes.

But Gov. Wike who is the Chief Security officer of the state has repeatedly debunked their claims of deaths in Obigbo. The Governor has neither faulted the operations of solders in the state in manner nor linked the Army to any alleged abductions as claimed by IPOB Code propaganda instrument-InterSociety.

Having realized, it is chasing an empty whirlwind, and determined to make their story convincing to the ears, InterSociety infused it with the ethnic cleansing card and religious extermination agenda. The glaring attempts to disfigure reality is further weakened their inconsistent and conflicting expositions. If based on Intersociety claims of an ethnic and religious agenda pursued by a Muslim /Fulani Army; why is the same Army from the 6 Division Nigerian Army, Port Harcourt overseeing Rivers state led by a Southwesterner?

Also, to frighten Gov. Wike and divert attention from their atrocious acts, IPOB Code members had earlier accused him of ingratitude. They claimed the Governor rewarding their electoral support to him with chasing them out of Oyigbo and Rivers state. It was a ploy to distract Gov. Wike’s attention from focusing on the atrocious acts.
But InterSociety should be adequately informed that it’s behind the scenes satanic resurrection of the defunct IPOB is known by the relevant security agencies. Its identity as sponsors, think-tank and media propagandists for IPOB Code is no longer hidden now. Even the composition of its principal officers has betrayed it as a congregation of members of the defunct IPOB ever willing to unleash mayhem on any part of Nigeria.

CESJET is, therefore, calling on the Nigerian Police, the Department of State Security Services (DSS) and all other relevant security agencies to keep an eagle eye on the operations of  InterSociety and IPOB Code members in the South. They could probably be building an amazing network of adherents discreetly to the detriment of public peace and security.

Gov. Wike who is the Chief Security Officer of the state must necessarily sustain his vigilance on the sect to protect lives and property. Or else,  and quite undeniably, members of IPOB Code are fully prepared and armed to plunge the state into unimaginable violence and bloodshed, anytime soon.