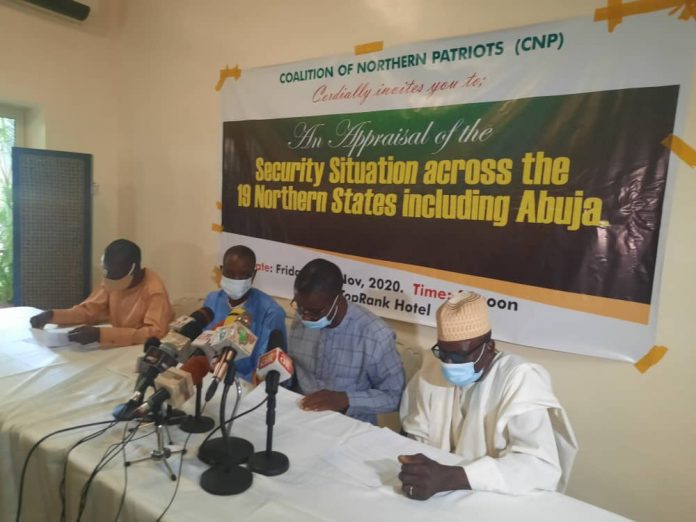 Following an extensive appraisal of the security situation across the 19 northern states, the Coalition of Northern Patriots (CNP) says President Muhammadu and the Nigerian military have successfully quelled the threats posed by criminal elements.

According to the coalition, this feat is particularly impressive considering the concerted effort by some interest groups to undermine troops’ progress.

The CNP made this disclosure in its special report on the security situation in Northern Nigeria.

Speaking on Friday at a press conference to unveil the report to the public in Abuja, Alex Samuel, on behalf of the group, said the appraisal was necessary to put things in proper perspective.

Among others, Samuel noted that assessment tours, interviews with critical stakeholders, religious bodies, community leaders, security agencies as well as civil society organizations and non-governmental organizations were deployed to ascertain the true state of things.

At the end of the exercise, the group concluded that there has been tremendous improvement in the security situation in the 19 states thanks to the military and other security agencies.

The report also highlighted that some elements behind the EndSARS protests may be responsible for the violence in the north in a bid to discredit President Buhari-led government.

The coalition, however, warned Nigerians against falsehood capable of undermining the security agencies.

It recommended that troops review their operational strategies in the light of the evolving nature of the security threats and must be wary of agents of destabilisation.

The emphasis on the 19 Northern states in Nigeria was hinged on the need to cross-examine the security situation with regards to the efforts of the relevant security agencies in addressing the various security challenges in these states. Consequently, for an in-depth assessment and appraisal, efforts were made towards segmenting states under various subheadings.

Primary sources of data were employed during the appraisal that included but not limited to on the spot assessment tours, interviews with critical stakeholders, religious bodies, community leaders, security agencies as well as civil society organizations and non-governmental organizations involved in humanitarian services in the states in Northern Nigeria.

Questionnaires were also distributed across a cross-section of residents in these states to gather first-hand feedback with regards to the security situation in their various domains and the efforts of the relevant security agencies.

The feedback gathered from the assessment of the security situation in the 19 Northern states in Nigeria is segmented into regions and elucidated below:

The North Central comprises Benue, Niger, Nasarawa, Pleatua, Kwara and Kogi states. A team of dedicated researchers were dispatched to these states to gather information on the security situation in these states, and the following were identified:

It was gathered that the prominent security issues in North Central were that of kidnappings and farmers-herders conflict. However, there has been a rapid decline in the activities of kidnappers in these states as a result of the introduction of Operation Sahel Sanity by the Nigerian Army in September 2020.

Critical stakeholders corroborated this fact. They heaped praises on the various efforts of the security agencies, especially the Nigerian Army, through its various operations that included routine patrols and intelligence gathering.

According to feedback gathered, the various security agencies have been alive to their responsibilities and have carried on with such professionalism that has seen the overall improvement in the security situation in the region.

The main security challenge in North-East Nigeria is the threat posed by the Boko Haram terrorist group, as well as the Islamic State of West African Province (ISWAP). The Nigerian Army has been at the forefront of leading the charge against the Boko Haram insurgency.

The team of researchers was able to identify that in the six states in North-East Nigeria (Borno, Yobe, Bauchi, Adamawa, Gombe and Taraba) the Boko Haram threat has been effectively contained in all but Borno State still experiencing some pockets of Boko Haram attacks on the fringes of the Lake Chad Basin region.

It was observed that there had been a renewed onslaught by the Nigerian Military towards addressing the Boko Haram threat in Borno state through the doubling of efforts and cooperation of the political authorities in the states towards bringing an end to the Boko Haram menace in the state.

The various stakeholders in the region indeed confirmed that the Boko Haram group has been decimated and that the Nigerian Military is currently engaged in clearance operations in Borno states and other states in the region. This much was seen in the strong presence on military operatives in these states and perceived hotspots.

It was also observed that the morale of the security operatives in the region is at a high given the commitment of the military hierarchy towards bringing to an end the Boko Haram insurgency in the region.

The North West region in Nigeria has been under the siege of Armed Banditry and other criminal gangs operating in the region. It was observed that the introduction of Operation Sahel Sanity by the Nigerian Army had been the game-changer in addressing the security threats in the region.

According to reliable facts gathered, Operation Sahel Sanity was a huge success, and it effectively addressed the threats posed by armed bandits and other criminal gangs in the North West region.

The issue of cattle rustling has also been reduced to the barest minimum in these states. It was also identified that most of the criminal gangs in operation in the North West region had been decimated by the combined efforts of the Nigerian Military and other critical stakeholders.

The state governments, it was observed also played critical roles by supporting the operations of the security agencies in the region. This much has consequently resulted in an improved security situation in the region and the return of normalcy.

Socio-economic life has also effectively resumed in the North West region as citizens now go about their normal businesses without fear.

The Abuja-Kaduna expressway, which serves as the gateway to Northern Nigeria, has been identified as the den of kidnappers forcing travellers to take alternative routes. The activities of kidnappers have been daring, and this has resulted in massive kidnappings. The team of researchers consequently undertook a critical assessment of the security situation on the Abuja-Kaduna road.

It was also observed that, but for the recent attack on the road, there hasn’t been any attack for an extended period due to the various mechanisms put in place by the security agencies and the Kaduna State government.

According to reliable information gathered from stakeholders, the activities of kidnappers on the Abuja-Kaduna expressway has been evolving, and the security agencies have been continuously on the trail of the kidnappers ransacking their hideouts and as well as effecting arrest of informants.

It was also observed that the kidnappings on the Abuja-Kaduna expressway are an organized crime with some locals aiding and abetting criminal gangs that terrorize travellers on the stretch. Nonetheless, the efforts of the security agencies have been outstanding and have been commendable.

The Coalition of Northern Patriots as a result of the appraisal of the security situation in the 19 states in Northern Nigeria wishes to state that the operations of the Nigerian Military have been very successful in addressing the security challenges posed by criminal elements. This is also on the heels that there has been a concerted effort by some interest groups to undermine the efforts of the security agencies.

There is also every indication that the very elements behind the EndSARS protests that intended to cause a violent overthrow of power are out to discredit the Muhammadu Buhari administration in the North by churning out highly misleading information on the security situation in the North.

It is thus the position of the Coalition of Northern Patriots that indeed there have been concerted efforts by the security agencies towards addressing the security threats in Northern Nigeria most proactively and efficiently.

It is also a statement of the fact that there has been a tremendous improvement in the security situation across the 19 Northern states.

That the security agencies in Nigeria must continuously review their operational strategies in the light of the evolving nature of the security threats in the country.

That the security agencies must be wary of agents of destabilization that dot the nook and crannies of  Nigeria with an overarching plot to cause a violent overthrow of the government by instigating the populace against the constituted authorities in the country.

That the media should also be wary of some unscrupulous elements that have identified the media as that potent avenue for the propagation of fake news.