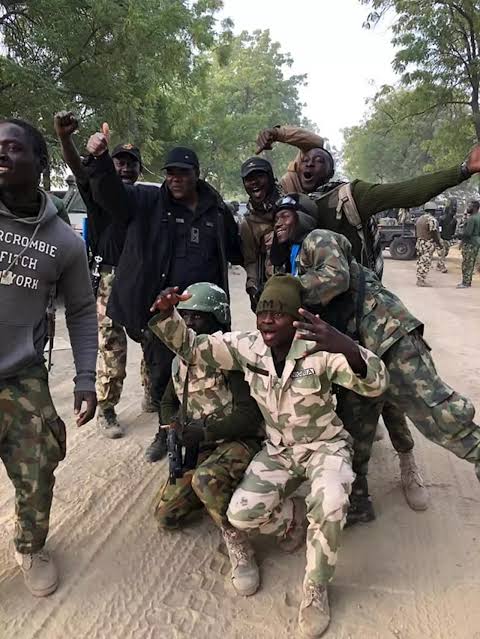 The North East Peace Agenda (NEPA) has lamented the worrisome attacks targeted at the Nigerian military by some media outfits despite the troops’ patriotism and sacrifices to rid the nation of terrorists and other criminal elements.

The group said this unnecessary assault does not bode well for the restoration of peace and security that these institutions stand for.

In a statement signed by National Coordinator, Ibrahim Bukar, on Wednesday, NEPA fingered Sahara Reporters to be at the forefront of this campaign.

While acknowledging that Sahara’s mischievous alliance with foreign groups to rubbish the military isn’t new, Bukar said it reached an all new level with its recent outing.

SR alleged that a routine change of guard in the Nigerian Army was informed by a decision to punish an erstwhile Theatre Commander of Operation Lafiya Dole for daring to demand for weapons to fight Boko Haram terrorists.

The North East Peace Agenda, therefore, condemns Sahara Reporters for promoting mischief, falsehood and dishonest objectives with sole intent of ruining the gains so far made on the war against insurgency.

The group strongly advised the Omoyele Sowore-owned outlet to find their missing conscience and quit following the direction dictated by its foreign financiers.

The North East Peace Agenda has observed with alarm the resurgence of targeted media attack on the counterterrorism by the Nigerian Military as this does not bode well for the restoration of peace and security that these institutions are saddled with.

This attack on the military climaxed with the glee that an outlet like Sahara Reporters celebrated the Boko Haram attack on Nigerian troops in Yobe state. The mischief that is behind this this criminal undertaken was obvious from the way Sahara Reporters rushed to manipulate figures and distorted facts to arrive at its goal of maligning an institution that has given much to deliver on its sacred mandate.

It is public knowledge that the military has done much to rid the country and neigbouring countries of Boko Haram and its carious subsidiaries, an exercise that has unnecessarily become onerous because of the foreign and international support that terrorists are getting in form of weapons, secret trainings, leaked intelligence, clandestine funding and other forms of support that has given the terrorists an appearance of being resilient.

Perhaps the greatest support that the terrorists have enjoyed comes from international NGOs and pro-terrorists media outfits that help to deliver damaging propaganda for Boko Haram under the pretext of doing cutting edge stories. These are stories that will not stand to the scrutiny of professional and ethical journalism for the mere fact that they are not news stories in the journalistic sense of it but are rather press releases and statements crafted by Boko Haram and given the air or responsibility by known media outfits peddling them.

It is on this note that we reviewed with disappointment how Sahara Reporters led a pack of like minded platforms to allege that a routine change of guard in the Nigerian Army was informed by a decision to punish an erstwhile Theatre Commander of Operation Lafiya Dole for daring to demand for weapons to fight Boko Haram terrorists. A news outlet that can infer such dismal of low intelligence on the part of its readers by telling such tales by moonlight does not deserve their respect and has no business being in existence in the first place.

Tragically, these series of misdeeds are not firsts for Sahara Reporters, which has been in the habit of promoting all manner of fake news against the military. The publication has in the past reported falsehood against the army in favour of the Islamic Movement in Nigeria (IMN), Indigenous People of Biafra (IPOB), Boko Haram and just about any configuration that has the disintegration of Nigeria as its agenda.

For an online news portal whose publisher openly called for a forceful overthrow of a legitimately elected government, under the guise of #RevolutionNow movement, it is no surprise to us that Sahara Reporters and its affiliated agents of darkness deliberately manipulated and escalated casualty figure from the Yobe state incident. This action was not only targeted at derailing the Nigerian military but to also trigger mutiny amongst the troops and cause them to abandon their duties posts for terrorists to overrun the country.

In running this negative propaganda, Sahara Reporters is fully aware that it would create a hive scenario whereby other publications, even the respectable ones, will be sucked into replicating its against the military thereby creating the impression that its lies are mainstream.

Even more appalling is the realization that the dirty contract being executed b y Sahara Reporters is at the behest of foreign interests that have things to gain from supporting Boko Haram against the Nigerian state. That a publication that hinges its existence on supposedly working for the betterment of Nigeria can become the terrorists propaganda corps is mind boggling.

Not minding its practice of resorting to blackmailing and maligning anyone brave enough to challenge its criminal undertakings, the North East Peace Agenda condemn Sahara Reporters in the strongest terms possible for promoting mischief, falsehood and dishonest objectives with sole intent of ruining the gains so far made on the war against insurgency. We strongly advise that Sahara Reporters and those that make decisions within that organization search for and find their missing conscience so that their actions and reports will be guided by the truth and not the direction dictated by its foreign financiers.

We realize that the temptation to retain steady access to the allure of donors remitted foreign currency is strong, but they need to realize that they owe a stronger duty of doing the right thing to themselves and to other Nigerians, whose lives are being negatively impacted by the lies dressed up as exclusive reports. The damage being done to the polity is what should prompt Sahara Reporters to cease and desist from further maligning the military while tendering unreserved apology to Nigerians for packaging the selfish agenda and vendetta of its publisher as facts for its unsuspecting readers to consume and act on.

The North East Peace Agenda calls on authorities to step away from their comfort zone of allowing Sahara Reporters get away with mass murder, for that is what its promotion of falsehood amounts to. The mechanism for exacting consequences for the serial misdeeds of the online news site should be activated and promptly so too.