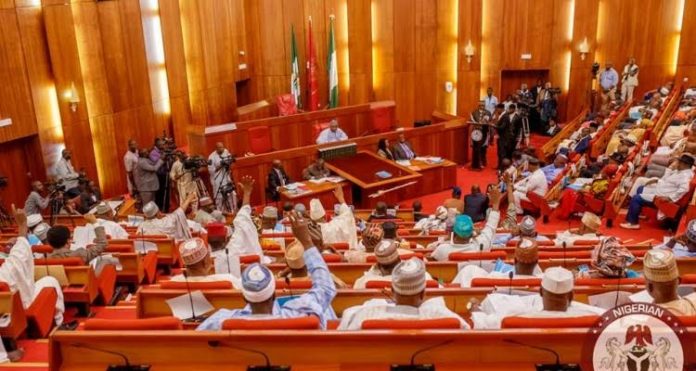 Nigerians in Diaspora Monitoring Group United Kingdom (NDMG-UK) has charged the Senate not to allow itself to be used as an agent to destabilize the country through the proposed Armed Forces Commission Bill.

The group of Nigerians in the UK made this known in a communique issued after its meeting in London on Monday, which appraised and reviewed in totality the legislative activities of Nigeria’s 9th National Assembly.

In the communique co-signed by Prince Ugo and Mr. Tegha Samuel, Chairman and Secretary Communique Drafting Committee respectively, the NDMG-UK urged the NASS to take a deeper look at the proposed bill and restrain itself from foisting confusion.

The UK group revealed that the Armed Forces of a country is a symbol of unity and should be spared from partisan abuses especially as being contemplated by controversial lawmaker, Senator Enyinnaya Abaribe.

Failure to do so, the NDMG-UK reckoned, may lead to a total break down of law and order which is the ultimate target of Senator Abaribe and his cohorts.

The group, however, urged the NASS “to retrace its footsteps and learn to conduct its legislative functions in a manner that is beneficial to the immediate and future aspirations and progress of Nigeria”.

A communique issued by the Nigerians in Diaspora Monitoring Group, United Kingdom (NDMG-UK) after its meeting in London, which appraised and reviewed in totality the legislative activities of Nigeria’s 9th National Assembly (NASS).

That the Nigerians in Diaspora Monitoring Group, United Kingdom (NDMG-UK) has recognized the legislature as an integral and very crucial arm of the democratic government in Nigeria. And the National Assembly (NASS) which is the only organ vested with the powers of churning out legislations for good governance seems to have slumbered, slacked, unfocused and derailed in the discharge of this fundamental responsibility.

The NDMG-UK wishes to call on the leadership of the National Assembly led by the President of Senate, Sen. Ahmed Lawan and the House of Representatives Speaker. Hon. Femi Gbajabiamila to urgently re-direct the parliamentary body on a productive, purposeful and rewarding trajectory of lawmaking for the nation.

The NASS leadership is enjoined to frequently organize seminars and workshops for national parliamentarians in the area of legislative functions, procedures and matters of legislation through sponsored member-Bills and other issues ancillary to it. This will refresh the knowledge and enlighten lawmakers especially newcomers in the Chambers on the art of legislation and the democratic process.

The meeting noted with grave concern some anti-populist motions and Bills being contemplated by both chambers for passage. The NDMG-UK particularly frowns at the recent resolution of NASS which purportedly passed a resolution calling on President Muhammadu Buhari to resign over resurgent insecurities in parts of the country.

Equally, we condemn in stringent terms the calls for the resignation of the country’s Service Chiefs as an egregious resort to laying the landmines for disruption of Nigeria’s democracy and overheating of the polity. Such positions emanating from the hallowed chamber of NASS which failed to gauge public mood are calls for anarchy and plain disservice to the nation.

The meeting also resolved that the NASS be reminded that it must genuinely re-work and re-order itself to toe the path of public good in the course of legislation for the general interest of Nigerians. Its status now only aligns to the generally held notion that the 9th National Assembly has not proven an inch that it has the interest of Nigeria at heart.

The NDMG-UK also wishes to draw the attention of all well meaning Nigerians to the Armed Forces Commission Bill currently being debated in the Senate which seeks to strip Mr. President of the constitutional power as the C-in- C to exercise full control of appointment and promotion for officers in the Nigerian Armed Forces. It also raised fundamental concerns over the Bill in the House of Representatives seeking to upgrade the educational qualification for aspirants gunning for election either as President or Governor as another misplaced priority.

The meeting noted that both Bills are attempts tomqif allowed to scale through. The NASS is hereby persuaded to take a deeper look at the proposed Bills and restrain themselves from foisting an aberration and confusion on the nation by discontinuing any further debate and or, discarding the Bills for national interest.

NDMG-UK wishes to use this as an opportunity to persuade the entire leadership of the National Assembly to take into account the flurry of opposition and protestations against the proposed Armed Forces Commission Bill particularly staged by Nigerians and a barrage of Civil Society organizations (CSOs). These are attestation to the public resentment over the actions of the parliamentarians who are encouraged to make necessary adjustments. They are obliged to cultivate the needed public sensitivity when taking such decisions in the future.

The meeting noted that the Armed Forces of any country binds the nation together and must be protected by its Government. Any other institution in the country could be bastardized, but the Armed Forces should be spared and insulated from partisan abuses especially as being contemplated by Senator Abaribe.

Finally, the NDMG-UK wishes to unequivocally call on the entire National Assembly to retrace its footsteps and learn to conduct its legislative functions in a manner that is beneficial to the immediate and future aspirations and progress of Nigeria.