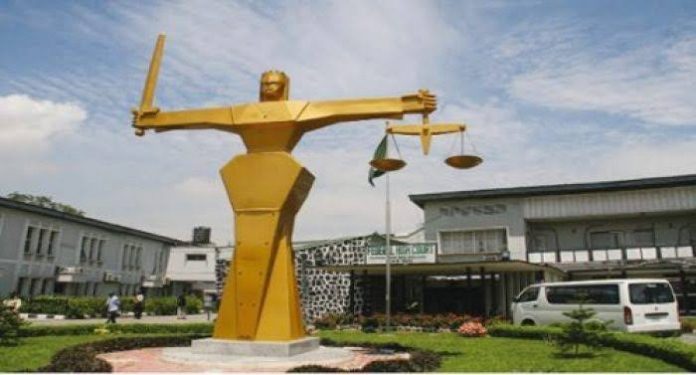 The Association of Ebonyi State Indigenes in the Diaspora (AESID) has warned the state government to stop intimidating Judges in the cause of their duties, even as it commended the new Commissioner of Police for being professional.

The Ebonyi indigenes said the agents of state government were trying to manipulate the judiciary into causing trouble in the opposition Peoples Democratic Party (PDP) in the state.

In a statement released by its President, Amb. Paschal Oluchukwu, on Sunday in Abuja, said the goal is to continue to cause division in the PDP by having the Nwebonyi group parade as a factional State Exco of the PDP through Suit No: HAB/161/2020 with Roy Umahi as the lead counsel to the Plaintiffs.

“We condemn, whole and entire the desperate attempts to use the Judiciary to achieve the threat of being in APC and sponsoring crises and divisions in the PDP.”

While commending the Ebonyi Judiciary for remaining firm as the last hope of the common man, the statement called on the Ebonyi State’s Judiciary to remain steadfast and unwavering.

“Already, we have read in the media through the former Assistant Financial Secretary of the Nwebonyi group who recently dumped the camp, Linus Ogazi how Governor Umahi divided the Excos in order to create a parallel faction of the party.

“AESID is also aware of the threats and intimidations that the young man has been receiving since he made the disclosures and wishes to call on Security agencies to call the Governor, his brothers and the Speaker of the State’s House of Assembly who have been dishing out threats to him to order. They should be held responsible for whatever happens to Mr. Ogazi.”

On the activities of the new Commissioner of Police, CP Aliyu Garba, the group thanked the police for their professional role in ensuring that those who staged a protest recently at the state High Court were dispelled peacefully.

“We, however wish to counsel the new CP to remain as professional and apolitical as his erstwhile colleague, CP Philip Maku who has been transferred from the state.

“AESID also calls on security agencies and INEC to obey the order of Justice I. E. Ekwo of the Abuja Federal High Court in Suit No: FHC/ABJ/CS/1609/2020 restraining David Umahi’s faction of the PDP in Ebonyi State led by the gadfly, Nwebonyi and his cohorts from parading themselves as officers of the Party. They should therefore provide security and accord protection to the Udeogu-led Exco to legitimately takeover the State Secretariat of the Party for the interest of justice, peace and unity of the opposition party.

“AESID lastly commends the Udeogu-led Excos and indeed, the teeming members of PDP for their calmness, steadfastness and resoluteness amidst attacks and wanton provocations by Governor Umahi and his surrogates. For in the end, it shall indeed, be proven to all that Ebonyi is PDP and PDP is Ebonyi State and Umahi is only a solo naked dance in his new political voyage!”