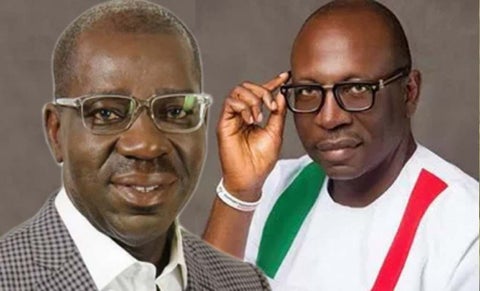 The All Progressives Congress (APC) has accused the opposition Peoples Democratic Party (PDP) and it’s Rivers state governor Nyesom Wike, of importing thugs into Edo state to cause violence ahead of the forthcoming governorship election.

The APC, however, condemned reports of the destruction of property and violence allegedly meted on hapless victims during Saturday’s campaign of the PDP Edo state governorship candidate, Godwin Obaseki in Benin City.

In a statement signed by its deputy national publicity secretary, Yekini Nabena, Sunday in Abuja, APC said “to imagine that the PDP chose to desecrate the Palace of the Oba of Benin, Oba Ewuare II is despicable, unheard of and a new low even by PDP’s ignoble standards.”

The statement wondered the need for the show of force on the citizens PDP wish to govern.

“The disturbing images and reports of the destruction of property and violence meted on hapless victims during Saturday’s campaign of the Peoples Democratic Party (PDP) Edo State governorship candidate, Godwin Obaseki in Benin City, the state capital is a glimpse into the “do or die” plot the PDP plans to unleash in the lead up to the September 19 Governorship Election.

“The PDP in Edo state is not campaigning for votes but relying on brute force, violence and intimidation ahead of the governorship election. The Governor of River state, Nyesom Wike promised on Saturday to “make sure that everything needed is done” to foist the PDP governorship candidate on the good people of Edo state.

“Wike is bent on importing to Edo state his Rivers state model of violence and intimidation. He will not succeed! We definately will not watch helplessly and allow the PDP and Wike turn Edo state into a killing field in their attempt to foist an unpopular candidate.

“The All Progressives Congress (APC) strongly condemns the violence and calls on our security services to fish out the perpetrators and their sponsors.”

While rejecting all forms of political violence during the electioneering campaigns in Edo state, Nabena said the Saturday’s experience was allegedly unleashed by the “Obaseki boys.”

“During the entire Edo state governoship electioneering process, we stand with the good people of state in rejecting all forms of political violence as was unleashed on Saturday by the so called “Obaseki Boys” and PDP supporters on hapless victims.

“The APC reiterates its stand that the people’s will and votes will determine the Edo State governorship election, not voter intimidation and election violence.”