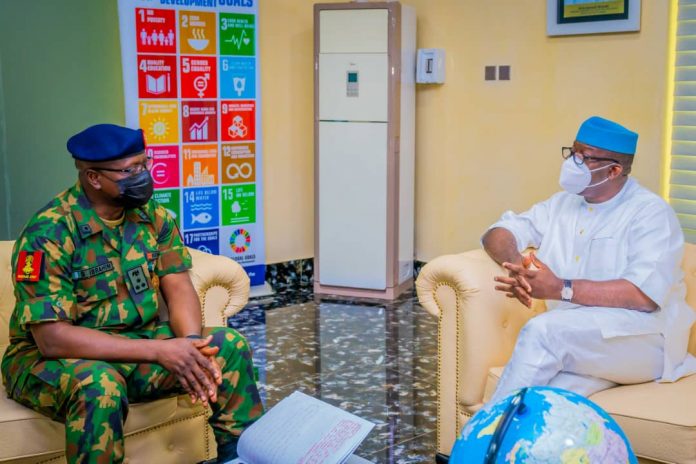 Ekiti State Governor, His Excellency Dr. Kayode Fayemi has pledged that his administration will do more on the security and welfare of Corps members serving in the state. He made the promise when he received the Director General of National Youth Service Corps, Brigadier General Shuaibu Ibrahim in his office in Ado Ekiti, the state capital today 23rd March, 2021.

The governor who condemned in very strong terms the violence that erupted during a bye-election last Saturday at Unit 7, Ward 7 of Omuo Ekiti in Ekiti East Local Government Area of the state, which left Corps member Saidu Mohammed Adamu (EK/20B1251) wounded tendered an unreserved apology to the Corps member and the entire NYSC family over the unfortunate incident, and stated that his administration in conjunction with security agencies are doing everything possible to fish out the papetrators of the heinous crime.

“On behalf of the government and entire people of Ekiti state, I apologize unreservedly to the affected Corps member and the NYSC Scheme. I want to assure you that we will not leave any stone unturned until we apprehend the criminals behind this ugly development, and we will ensure they are severely punished so as to serve as deterrent to others” he emphasized.

Governor Fayemi equally eulogized the Director General of NYSC for the swift actions he took when the sad event happened.

He said “I appreciate and commend your prompt response, setting aside so many critical engagements to come here and see the injured Corps member in person despite the fact that you have capable hands on ground. This is a demonstration of pragmatic leadership”.

He assured that the state government will foot the bill of the Corps member’s treatment.

Earlier, the NYSC helmsman thanked the governor for visiting the affected Corps member personally in hospital.

He used the occasion to call on Nigerians to always protect Corps members, especially those who volunteer to participate in the conduct of elections as adhoc staff of Independent National Electoral Commission.

“Our Corps members are apolitical and patriotic. They are not indigenes of their states of service, as such their willingness to volunteer to deliver free, fair and credible elections goes a long way to show their patriotism” he added.

He also thanked the governor for standing by the NYSC at this period of pain.