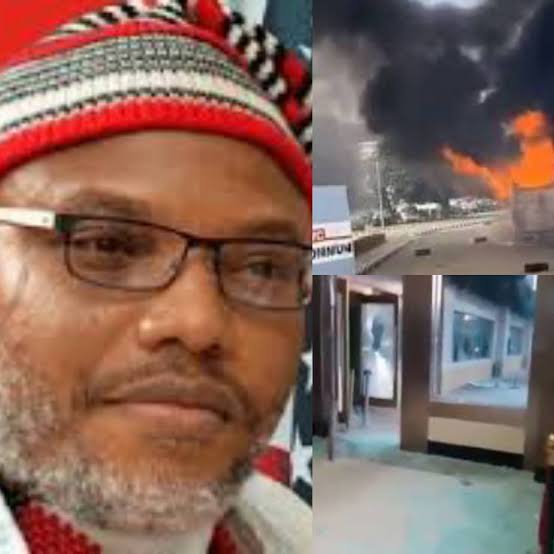 The Council of Patriotic Yoruba Youth (CPYY) has blamed Nnamdi Kanu and his proscribed Indigenous People of Biafra (IPOB) for the attack on innocent #EndSARS protesters and the arson that followed in Lagos State.

In a statement signed by its President,
Fagbemi Olanrewaju, on Friday, the CPYY said Kanu had declared war on the Yoruba nation and effectively carried out his threat.

Recall that peaceful #EndSARS protesters were shot by unknown gunmen at Lekki tollgate on Tuesday while the Oba of Lagos palace, TVC headquarters, The Nation Newspaper and others were attacked by hoodlums the following day.

And according to CPYY, this was a well-thought-out plot by Kanu to destroy the economic advantage of the Yoruba nation and make them subservient to the Igbo’s whose property and businesses were left intact.

The group said targetting Yoruba businesses “marks a despicable low even for a scoundrel like Nnamdi Kanu, whose trademark as a coward that abandoned his so-called struggle and fled abroad to instigate attacks from his bolthole”.

It added that it is “most irresponsible to hijack the #EndSARS protests, which objectives are noble, and deploy the same as a vehicle for pursuing a failed separatist agenda”.

The group, however, assured that the Yoruba nation will continue to “live by and display the high sense of civility for which our respected culture is known and will never descent to IPOB’s miserable depth”.

It urged the Federal Government to investigate the targeted arsons and shooting of #EndSARS protesters at Lekki tollgate.

The Council of Patriotic Yoruba Youth has had the opportunity to conduct an initial assessment in the aftermath of Tuesday, October 20, 2020 event at Lekki Toll Gate in Lagos in which pandemonium broke out as #EndSARS protesters that had camped out there in defiance of a curfew announced by the state government were fired upon by hoodlums suspected to have been rented by IPOB.

On the following day, there was widespread arson across the state with the destruction of the Nigeria Ports Authority building, Oriental Hotel, Television Continental (TVC) studios, the Nation newspapers head office, the Palace of the Oba of Lagos, the family homes of Lagos State Governor Babajide Sanwoolu, BRT depot in Oyingbo with scores of buses, other BRT locations and buses, looting of ShopRite outlets, burning of the police station and vehicles,  burning of the Federal Road Safety Corps (FRSC) vehicles, and destruction of several other homes.

Because the nearby CCTVs were earlier disabled and power supply (illumination) cut off before the Tuesday attack, the jury is still out as to the specific details of the gunmen that opened fire on the protesters. There has been outrage that the troops around the location fired the shots, but the videos shared by the protesters themselves showed that the soldiers were firing at inclined angles, which effectively meant they were shooting into the air. There was also the issue of the massive deployment of fake news to inflame passion over the incidents, particularly false news items that announced that several celebrities were killed, unrelated photos of accident victims and even promotional movie stills (like an actor carrying a body draped in Nigerian flag) were used as proof of casualty from the attack. Actress, Eniola Badmus, for instance, had to come forward to debunk trending news reports that she was killed at Lekki Toll Gate. Suffice to say, the ground has been set for what was to unfold on Wednesday.

The leader of the proscribed terrorist organization, Indigenous People of Biafra (IPOB), Nnamdi Kanu, on online interactive radio, actively coordinated the attacks by miscreants on Wednesday. He gave the names, identity and locations of people to be attacked. Those leading the attacks provided updates to Kanu who urged them on to carry out more attacks. Go and look for weapons and arm yourselves …build weapons, if you don’t have any gun construct one, even ordinary catapult build one, go and use it and destroy them… Anywhere you see Sanwoolu you attack him,  Tinubu, his hotel must be burned down…”

True to Kanu’s directive, the Igbo mob went to town and destroyed property they believed to belong to Tinubu and Sanwo-Olu, including the magnificent Oriental Hotel, which ownership has never been proven to be Tinubu’s. Other Yoruba owned assets were thoroughly vandalized, including the Palace of the Oba of Lagos. What played out was the fulfilment of IPOB’s long-standing threat to deal with the Yoruba because of their political tolerance of northern Nigeria.

These wanton arsons, on the surface, appear to be targeted at individuals, like the Oba of Lagos, whom the Igbos have promised to deal with because of his election period comments in 2015 that betrayals will suffer consequences from the deities. But in reality, the target is the entire Yoruba nation. The objective is to destroy the economic advantage of the Yoruba nation and make them subservient to the Igbo’s whose property and businesses were left intact – if the mob were truly not a posse of IPOB militants it would have destroyed everything in its path and not spare the assets of Igbo people. What transpired on Tuesday was a pure manifestation of Nnamdi Kanu and his IPOB targeted Yoruba businesses and personalities using #ENDSARS protests after his directive for Igbos to attack the Yoruba and the fact on the ground, including the feedback provided to Kanu by leaders of the arsonists, confirmed the targeting of respected Yoruba people and key businesses.

There is further evidence that points out that the burning of police stations by some so-called hoodlums was to provoke security agencies to pick up arms against the citizens and this was masterminded by the IPOB cells in Lagos.

The Council of Patriotic Yoruba Youth condemns this provocation in the strongest terms possible. The targeting of Yoruba businesses marks a despicable low even for a scoundrel like Nnamdi Kanu, whose trademark as a coward that abandoned his so-called struggle and fled abroad to instigate attacks from his bolthole. We find the conduct of the arsonists abhorrent, particularly when they stole the identity of soldiers to kill innocent and genuine protesters just so they could provoke the situation whereby they made their arson appeal like a justified reprisal. It is most irresponsible to hijack the #EndSARS protests, which objectives are noble, and deploy the same as a vehicle for pursuing a failed separatist agenda.

The Yoruba nation will persistently live by and display the high sense of civility for which our respected culture is known and will never descent to the miserable depth to which IPOB and its sympathizers have sunken. We will continue to hold onto the belief that the Igbo nation is not defined by the addiction to violence that is prevalent among the terrorist elements from that ethnic group.  We will however reply their provocations with the robust institutional frameworks that exist to deal with such errant behaviour.

Consequently, all true Yoruba sons and daughters should resist the temptation to be drawn into a tit-for-tat circle of violence that the IPOB cells want to plunge the entire country into the chaos they hope will help achieve their separatist agenda.

We call on the Federal Government to especially investigate the targeted arsons, which are not part of #EndSARS protests that had responsible Nigerians across all ethnic affiliations taking part. The investigation should extend to how Tuesday’s incident at Lekki Toll Gate was manipulated by IPOB terrorists to produce the outrage that left people indifferent while they unleashed the state-wide attacks the following Wednesday.

The Council of Patriotic Yoruba Youth demands that the Federal Government immediately approach the United Kingdom’s authorities with the recording of the radio broadcast that Kanu used for coordinating the Tuesday’s terrorist attacks to take into custody to come to answer for his actions. The same evidence should be provided to Interpol to bring Kanu in because his crime is international in these regards.

On the desecration of the Oba of Lagos’ Palace, we call on the state government to deploy the strongest scorch-earth policy against perpetrators until they return the stolen artefacts and perform the necessary cleansing rites. The state’s traditional council must also outlaw the use of any traditional title (eze, obi etc) by Igbos in the state going forward because of the disdain their people have shown for our traditional institution, which they have always been keen to subjugate.

Finally, we urge those affected by the arsons to stay strong in the confidence that as Yoruba they will always be reborn anew as the phoenix; out of the ashes of IPOB’s destruction more stately edifices shall arise.