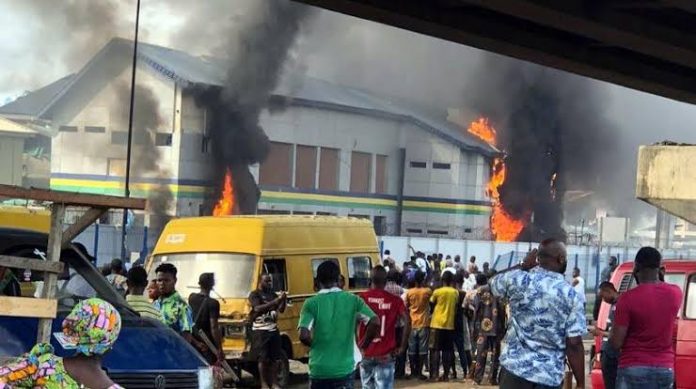 The Citizens Against Fake Activists (CAFA) has thrown its weight behind the move by the Federal Government to prosecute sponsors and promoters of violence during the EndSARS protests.

The CAFA also said it is appalled by the furore raised by those whose bank accounts were frozen, especially knowing they were used for illicit activities.

According to the group, those “who financed the protests have shared responsibility for the hacking of government cites as part of the protests.”

It added that “the financiers are accessories to the murder of the dozens of policemen who were killed by the incited mobs”.

CAFA, however, urged the law to take its course.

While calling on the Central Bank of Nigeria to continue its investigation, the CAFA also urged the Inspector General of Police to identify those responsible for the violence.

It added that “Once identified, the Inspector General of Police should charge these persons for terrorism financing and any other crime they might have committed”.

Gentlemen of the press, we will like to begin by stating that Citizens Against Fake Activists is appalled by the furore being raised by those whose bank accounts were frozen because they were used for illicit activities, to wit, acts of terrorism against the Nigerian state. We are similarly miffed that persons that instigated violence against. Nigeria is gripping about being barred from flying.

We will equally set out by making a fair disclosure that we support the demand for the reform of the Nigeria Police Force and the dismantling of any of its specialized unit found to have breached the rules of civil policing while offending officers should be tried as common criminals.

What we do not support, however, is the attempt by fake activists and their sponsors to overthrow a legitimate government using mob action as was witnessed in the aftermath of the Lekki Toll Gate incident when cities across Nigeria were gripped by criminals that looted and burnt properties during protests that were at that time no longer connected to the demands for reformed police.

But the lines must be drawn. There is a name for the use of intimidation, violence and threat of violence for coercing the state to agree to a set of demands. Those who made their bank accounts available for laundering the money that financed the violent protests need to be mindful of the implication of their action. For the avoidance of doubts, let us highlight some of the outcomes of those violent or provocative protests:

Those who obstructed the road denied other Nigerians of the right to use an infrastructure build with the commonwealth. Had the other citizens responded in similar measure there would have been widespread violence across the land. Those who instigated these blockades of public roads have cases to answer, especially when there were suggestions of mortality of persons who could not access lifesaving care at hospitals because of the resulting gridlocks.

Those who financed the protests have shared responsibility for the hacking of government cites as part of the protests. It is a cybercrime. It is terrorism.

The financiers are accessories to the murder of the dozens of policemen who were killed by the incited mobs. This is murder and the law forbids that, more so that those killed were policemen.

The torching of government buildings, websites, buses, vehicles and even private homes and businesses is arson. It is against the law. The protest sponsors and financiers have responsibility.

The looting of food banks, storehouses, food reserve and other times is theft accessioned by braking and entry. There are laws against this, and some people coordinated the attacks on these locations.

The looting of food reserves and privately held storages is an attempt at mass murder, the result which is ahead. By destroying the food storage Nigerians are at the risk of starvation in the coming months since there is nothing to bridge any shortfall in food supply having lost what was in reserve to the protesters. It is unlawful to assist someone escaping lawful correctional service’s custody; those who put down the money for staging the protests are responsible for the freeing of prisoners in several prisons in the country.

We appreciate that these people that financed the protests through their various bank accounts are enjoying the support of the public opinion, but things are not as simple as they sound. Public opinion, no matter how strident, cannot overrule the law. Those that are found culpable in the crimes listed earlier on will have to keep a date with the law and only pray that their crimes would be met with leniency that will give shorter sentences.

We are therefore demanding that the law takes it course. The Inspector-General of Police should identify more of those that were responsible for this mess while the Central Bank of Nigeria should continue investigating to unmask the enemies of Nigeria.

Once identified, the Inspector General of Police should charge these persons for terrorism financing and any other crime they might have committed. They must face charges for a treasonable felony which was their real motive. They then have the right to clear themselves in court if they can or they should willingly go in for what they have done.

Meanwhile, we appeal to news organization representatives, bloggers and genuine activists to take time to research the issue at hand to have the right perspective for objective reporting. The state has responsibility to prosecute any crime committed even if it is committed in the pursuit of a good cause.