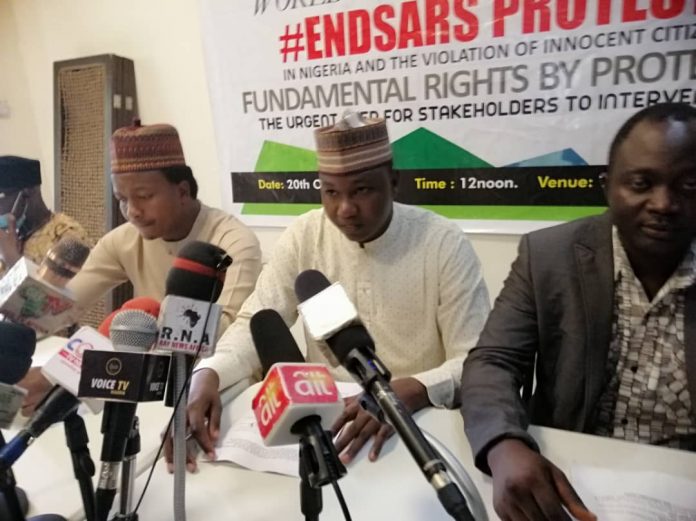 The Civil Situation Room has called for an immediate suspension of the #EndSARS protests across the country over human rights abuses.

The situation room, consisting of over 100 human rights groups said the protests have taken a violent twist in recent days, infringing on the rights of other citizens and entrenching criminal activities.

Protests demanding an end to Police brutality entered its 12th day on Monday despite the disbandment of the Special Anti-Robbery Squad (SARS) and subsequent formation of Special Weapons and Tactics (SWAT).

In the last couple of days, the exercise has become fierce, particularly in the Federal Capital Territory, Lagos and Benin.

Speaking at a press conference on Tuesday in Abuja, coordinator of the Situation Room on #EndSARS Comrade Adamu Kabir Matazu said protesters are now involved in abuses, depriving people of their lives.

He, however, urged leaders of thought all over the world to prevail on the #EndSARS protesters to respect the rights of other citizens.

Comrade Kabir also urged the Federal Government to “change its approach of allowing some people run riot simply because they are hiding under the identity of youth to protest”.

He said the FG must step in to bring order and sanity to stop the protesters from interfering with the ordinary citizens and preventing people from going about their legitimate businesses.

Gentlemen of the press, we are pleased to welcome you to this press conference which is called to address issues arising from #EndSARS protests. You will recall that when the incidents of police brutality first became topical and Nigerians decided to protest against it all of us joined without hesitation. At the start of these protests everyone was focused on issues while highlighting the need to call operatives of SARS unit to order with the demand that the unit must be scrapped.

It was reassuring that the federal government and the Nigeria Police Force were responsive by immediately scrapping SARS. Further agitation from protesters saw to it that the government agreed to a five-point demand from protesters. These demands were geared towards wholesomely reforming the police. From the way we see it the demands that were tabled included items that should be dealt with immediately, on this short term, on the midterm, and long term.

As outlined, we realize that it will take time for each set of demands to be implemented depending on whether it’s something that will be done immediately or something that will cover a period of months or years. The logic is that protesters will then allow the government time to implement these demanded changes.

This perhaps informed the decision of some people to drop out of the protest because they want the government to have time to respond to the things that they have asked for. This does not in any way negate the rights of those who decided that they will continue to protest in fact we seem that they now moved beyond the demand for police reform to include other things, some of them are even asking for the sack of the government, which was not something that was originally on the table.

What this means is that serious minded people returned to their legitimate businesses and activities while waiting to see how the government implement the changes that they have demanded. From the way we look at it, this has made those who are still protesting to change their tactics by doing things to force others to become part of the protest. We now see them increasingly blocking roads in a way that prevents people from getting to their workplaces, from getting to their places of business, and even in some instances from accessing lifesaving treatment.

In Abuja for instance, protesters obstructed the airport road, knowing that it is a major access for people traveling out of the city and heading to the airport to catch their flights. A particularly sad outcome from this was the case of the woman reportedly in labor, who died because she could not get to the hospital for lifesaving intervention. In the same city, there are reported incidents of motorists getting their vehicles smashed in by the unruly protesters. In Osun state, there was the sad incident of protesters attacking the state governor, they then went on rampage and burnt down a mall in the state capital.

Ibadan, Oyo State: protesters obstructed the road and forced people to trek long distances while those going about their legitimate business were harassed endlessly. Lives of innocent citizens have also been lost in this state.

Lagos is also lockdown from the protesters, who made harassment of those not supporting their protests a standard modus operandi.

In other cases, the information we are getting is that protesters are randomly shooting at people, killing them, and depriving them of their lives apparently in their bid to frame law enforcement agencies to be  responsible for killing protesters. This perverted strategy is intended to make the government appear as being repressive and the law enforcement agencies as engaging in human rights abuses.

We the coalition of civil society groups numbering over 100 are therefore saying that #EndSARS protesters must stop the growing cases of human rights abuses that are being recorded at their protests. We cannot be campaigning against right abuses and then become guilty of things that we are against.

We like to conclude this briefing by stating that: we are calling on leaders of thought all over the world to prevail on #EndSARS protesters to respect the rights of other citizens.

We further demand that they prevail on the government to change its approach of allowing some people run riot simply because they are hiding under the identity of youth to protest. The government must step in to bring order and sanity to the protests whilst the protesters continued to interfere with the ordinary citizens and stopping people from going about their legitimate businesses is unfair, inhuman and unacceptable. We call on the international community, the US Ambassadors to Nigeria, British High Commissioner to Nigeria and all men of good conscience to call the errant members of the protests to order.

We fear that these innocent citizens will be forced to defend themselves if nothing is urgently done.

Thank you and God bless you all.