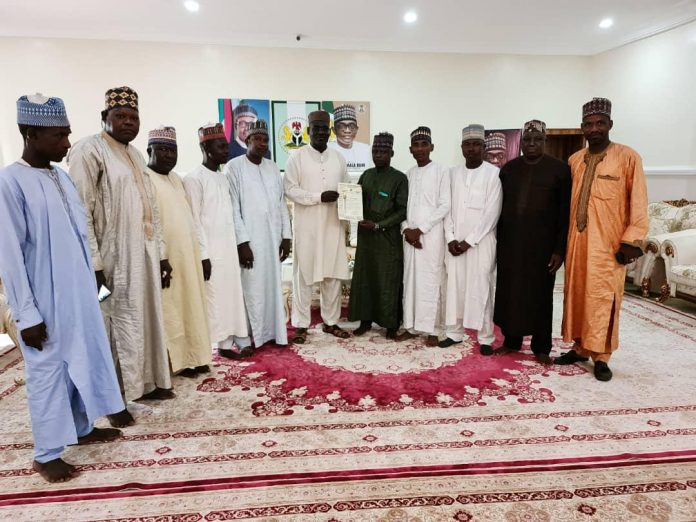 Nigeria’s Ambassador to Benin Republic, Lt. Gen. T.Y Buratai (rtd), has been appointed as the Patron of the National Forum of Ex-Councillors of Nigeria.

The group made this known on Tuesday after paying a visit to the former Army Chief in Damaturu, Yobe State.

According to a statement by the chairman of the State chapter, Abdulganiyu Mohammed, the ex-councillors chose Buratai due to his effort in restoring peace, security and development to communities in the state as well as the nation in general.

The group commended the former COAS for establishing many strategic military units and institutions in the northeast that further deter terrorist activities.

“Today, Tuesday, June 29, 2021, the Yobe State chapter of the National Forum of Ex-Councillors of Nigeria call on former Chief of Army Staff and Nigeria’s Ambassador-Designate to the Republic of Benin, His Excellency, Lieutenant General Tukur Yusufu Buratai (rtd), at the Government Lodge Damaturu. The team was led by the Chapter’s Chairman, Honourable Abdulganiyu Mohammed,” the statement reads.

“In his remarks, the Chairman briefed H.E. about the aims and objectives of the association, adding that they are closer to the people. He also said they were there to show appreciation and gratitude to Lieutenant General Buratai (rtd) for his efforts as Chief of Army Staff from July 2015 to January 2021, which brought peace, security and development to their communities in Yobe State and Nigeria at large.

“They commended him for establishing many strategic military units and institutions in the northeast that further deter terrorist activities. The team further stated that they were to congratulate him for his well-deserved appointment as Nigeria’s Ambassador to the Republic of Benin and presented him with a letter of appointment and honour as Patron of the Forum”.

Responding, Ambassador Buratai thanked them for a visit and accepted to serve as Patron of the Forum.

He also commended the delegation and members of the Forum for their continued commitment to peace and development in their wards, Yobe State and the nation.

He said that as grassroots people, Ward Councillors have a strategic role in supporting the Federal and State Governments in fostering peace and security in their respective wards.