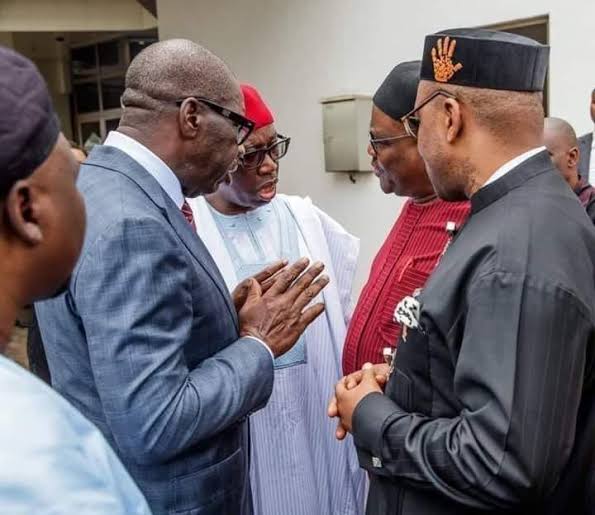 A political activist and former Deputy National Publicity Secretary of the All Progressives Congress (APC) Comrade Timi Frank, has called on the Rivers state governor Nyesom Wike, to show leadership and prevail on those preventing the Edo state governor Godwin Obaseki, from joining their fold in the state.

Frank said there may be clashes of interests with some bigwigs in Edo state but governor Wike as one of the active and respected leaders of the Peoples Democratic Party (PDP) in the South-south should make the warring parties see reasons to give Governor Obaseki a chance.

Frank believes that the forum of the APC governors failed to protect their colleague from the dreaded hands of APC cabals, hence PDP governors, especially from the South-south should prove to be different.

He said PDP leaders should seize the opportunity of having Obaseki in their fold if they truly want to take over Edo state.

“Findings have shown that if PDP reject Obaseki, other political parties are waitng to recieve him and those who want Obaseki to join the party which comprises of National Assembly PDP members, other leaders of the party in the state and many others will go with him. So, if PDP is not careful embracing Obaseki now, the party may eventually lose the governorship election.

“Governor Wike should know that Obaseki is a big fish that should be accommodated if the party is serious in winning Edo state, hence my appeal to all the warring parties. It is obvious that if Governor Wike intervene now and call the members in Edo chapter to order it will go a long way in resolving the crisis.

According to the Bayelsa born political activist in a statement made available to newsmen on Monday, “Governor Obaseki’s move to join the PDP should be a welcome idea to all. Although some leaders of the party in Edo state chapter may consider the move as injurious to them but considering the political exigence, it will later turn out to be in their best decisions.

“I therefore appeal to the Rivers state governor Wike, who has shown more commitment and dedication to ideals of democratic party and one of the highly respected leaders of the party in the South-south to rally round Obaseki and provide a soft landing for him.

Frank also called on governor Obaseki to quickly reach out more and give assurance of peace, togetherness and understanding to the warring members of PDP in Edo.

“I will also urge governor Obaseki to be strong and focus at this period of his political trial. The governor should know that he has been betrayed by a party he worked to build and people he helped to power. That is the nature of APC politics. But it is not over for him because the Edo people know the truth and will surely reward him at the poll.”