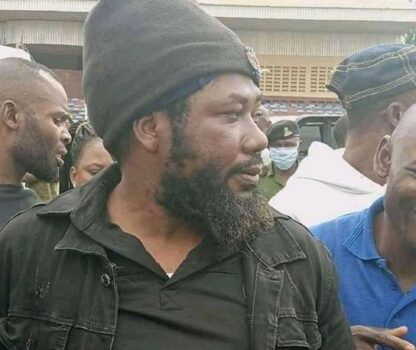 A civil society group, Coalition for Truth and Justice (CTJ) has called on the Federal Government to investigate Governor Samuel Ortom of Benue State and his predecessor, Gabriel Suswam over alleged links to slain militia leader, Terwase Akwaza, popularly known as Gana.

Akwaza, who terrorized Benue/Taraba axis, was killed at a roadblock mounted by the army along Gbese-Gboko-Makurdi road following exchange of gunfire on Tuesday.

The Benue State Government had in 2015 granted amnesty to over 500 criminals including Gana, most of whom relapsed into the act.

Gana was later in 2017 declared wanted by the police while the state government placed a N10 million bounty on him.

However, some political leaders in Benue, including Governor Ortom and Suswam, who represents Benue North in the National Assembly have expressed mixed feelings.

In reaction, through a statement signed by its National Coordinator, Timothy Charles, on Thursday, the Coalition for Truth and Justice said the pair and others should be investigated for even suggesting the idea of amnesty in the first place for a notorious militia leader.

The civil rights group said it won’t be surprised if these elites funded Gana’s operations and shielded him from the prying eyes of the security agents who have been on his trail in the past three years.

” The Coalition for Truth and Justice wishes to state that the uproar generated from some quarters in the aftermath of the death of Gana indicates that indeed, he Gana is the darling of politicians in Benue state for the advancement of their political agenda and with total disregard for the lives of the innocent women and children that have fallen victim to the nefarious activities of Gana and his gang of menacing marauders,” the statement reads.

“The Coalition for Truth and Justice indeed smells a rat in the unfolding events in Benue state with regards to the allegation levelled against the Nigerian Army in the death of Gana after a gun duel with soldiers at a military checkpoint.

“It is thus our considered opinion that for the political class to have muted the idea of Amnesty for a notorious militia leader who has killed and maimed hundreds of thousands of people is an indication that he Gana was a stooge of some political leaders in Benue state, who have continually funded his operations and shielded him from the prying eyes of the security agents who have been on his trail in the past three years.

” We also wish to state that we have it on good authority that the proposed Amnesty was a strategy developed by his sponsors and patrons to shield him from the full wrath of the law after using him to settle political scores as well as rig elections”.

The CTJ, therefore, called on the Federal Government as a matter of urgency investigate the links between Ortom and Suswan with the late militia leader.

It added that “Our position is hinged on the allegations by the Governor of Benue state and his co-travellers in the attempt to blackmail the Nigerian Army instead of commending it for this rare feat against ridding the North Central States in Nigeria of activities of militia groups as well as bandits whose activities have become a source of worry and concern in recent times.

“The Federal Government must also investigate the circumstances that warranted granting Amnesty to a criminal who has killed and maimed as well as committed other atrocious acts against the state. We, therefore, urge the Federal Government to do all within its powers to ensure that all those that have funded the operations of Gana and his gang are brought to face the full wrath of the law”.

The Coalition for Truth and Justice, however, commended the Nigerian Army for this feat and encourage the troops not to be distracted by the antics of politicians that have been fueling the crisis in states in North Central.