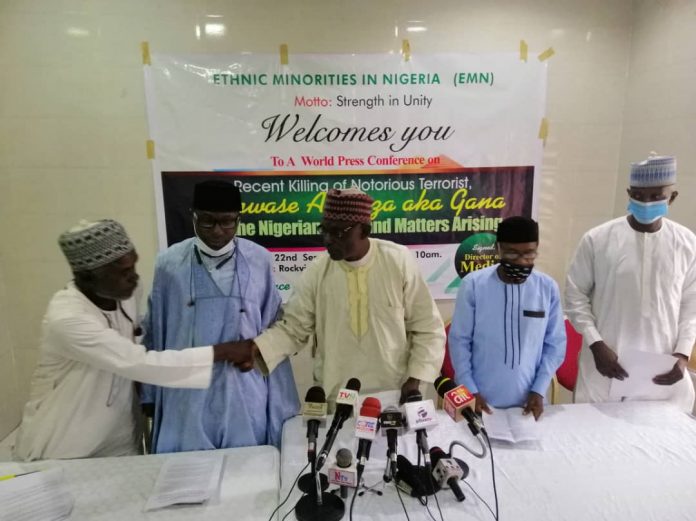 The death of notorious militia leader, Terwase Akwaza, popularly known as Gana would usher a new era of peace in the Middle-Belt region, the Ethnic Minorities in Nigeria (EMN) has said.

Spokesman of the group, Comrade Tony Odey made this known at its media briefing on Tuesday in Abuja.

According to the ECN, natives of Benue, Taraba and Nasarawa States breathed a sigh of relief when news of the death of Gana was announced.

The group said hundreds of massacres blamed on Fulani herdsmen were actually committed by Akwaza besides the routine cattle rustling, armed robbery and kidnap he was synonymous with.

The group, however, added that it is “unfortunate” that some persons or leaders of some ethnic groups have continued to mock and torment the peace of their fellow citizens by trying to foist a false analysis of the killing Gana on the people.

The group further warned those engaged in causing provocation with their “Gana worship” to desist from this exercise as they risk creating cult worship for a mass murderer.

While hailing the Nigerian Army for ending Gana’s long reign of terror, the ECN asked the military to go a step further to ensure that his remains are interred in an unidentified and unmarked location to prevent the location being turned into a shrine.

Gentlemen of the press, at the risk of being labelled as sadists for finding relief in the killing of terrorist militia boss, Terwase Akwaza better known by his nom de guerre, Gana, we invited you here today to hear our intervention on the matter, which certain vested interests are now desperately trying to exploit.

The entire middle belt region heaved sighs of relief last week Tuesday when the military issued its statement that its Operation Ayem Kpatuma has killed Gana in an exchange that took place when the militia leader was in a convoy heading to Makurdi. We are yet to verify if Gana was, in reality, heading to the Benue state capital to embrace a supposed amnesty programme by the state government or whether Benue state officials and a section of its traditional institution hatched a plan to help the militia leader flee his jungle sanctuary city upon the realization that the government troops were closing in on him.

Note that even one of his wives confessed that Gana was at the end of his tethers as he reportedly declared that he was tired of fighting. But this could be a ploy to escape the suffocating siege the Army had laid to the areas where he operated in. If he was really ready to embrace peace and face the consequences for the hundreds of lives he brutally cut short then he should have approached the military to turn himself in such that he would have been processed onward for trial instead of handing himself over to people who were not looking for him.

It must have been divine providence that made Gana attempt a repeat of what he did in the past by making a show of surrendering for amnesty only to quickly turn around and unleash the depraved killer in him. Let it be known that across the entire Middle Belt, victims of Gana’s reign of terror are jubilant that the plague on their lives has been removed permanently.

Those outside our region tend to look at Gana’s atrocities within the narrow band of the deaths directly attributed to him without factoring in his other evils. There are hundreds of deaths that were blamed on Fulani herdsmen but for which Gana was responsible for. There were the deaths by a hunger for those too traumatized to farm or pursue activities for their subsistence because they lived in perpetual fear of this terrorist.  And not to be left out are the deaths arising from poor governance because the cultured and upright people that should take part in politics in the area were in dread of being assassinated by the militia boss. These were concerns that went beyond the borders of Benue state and spilt into the entire Middle Belt.

This spillover had on several occasion almost caused inter-states friction or crisis but for the maturity and accommodating nature of the affected neighbouring states. So, in effect, Gana’s reign of terror could have as well plunged the country into a civil war.

It is therefore unfortunate that some persons or leaders of ethnic groups in Nigeria have continued to mock and torment the peace of their fellow citizens by trying to foist a false analysis of the killing Gana on the people. It is shocking that these persons are out to abuse the Tiv people by claiming that some people from the majority ethnic group in Benue State and the fifth largest ethnic group in Nigeria collectively preferred that the terrorist were still alive and killing more innocent persons.

For the record, Gana was a common vicious criminal who murdered innocent citizens with no mercy and carried on with this action until the military caught up with him. Had he made it to the Benue state capital, he would have either urbanized his warfare against Nigerians or he would relocate to another jungle that would have taken the military a long time to flush out.

Gana’s death at the hands of the Nigerian troops who had always done everything to keep the country safe and secured has nothing to do with extra-judicial killing as those who truly know Gana know that he has posses diabolical powers which he uses to kill his victims in a twinkle of an eye. None of his victims got as much as a Kangaroo Trial, which makes it surprising that those who failed to keep Gana, whom they created, on a leash are now lamenting about how he did not get a fair trial.

The essence of the amnesty programme that was designer packaged for Gana was to start another round of ethnic and politically masterminded killings in Benue, Taraba and Nassarawa States. Only those who have not had enough of Gana’s atrocities will pray that he lived for another day after sustaining serious degree injuries from his encounter with the troops.

Our response to those causing unnecessary provocation with their Gana worship is that they should desist from this exercise as they risk creating adult worship for a mass murderer. That is no example to set in a country that is direly in need of good examples in peacebuilding.

We wish to call on the Nigerian people to disregard the noise and join people of minority ethnic nationalities to celebrate the death of Gana. We further call on the people to review their relationship and see a good reason to live together as one family from now on.

Our appeal to the military is to do everything necessary to ensure that Gana’s remains are interred in an unidentified and unmarked location to prevent the location being turned into a shrine.