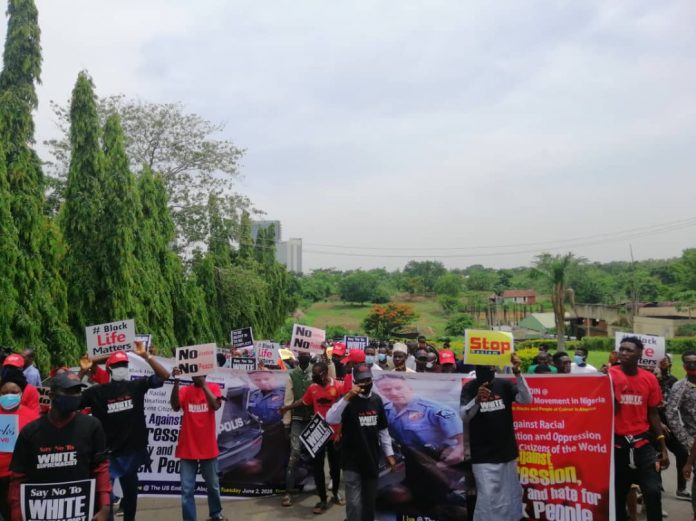 Hundreds of protesters early this morning besieged the United States of America embassy located in the Central Business District of Abuja to express their displesure over the recent and barbaric killings of George Floyd and several other s black persons in the US.

The protesters under the aegis of the Centre for Africa Liberation and Socio-Economic Rights, CALSER said the gathering is not only for the display of physical rage as a result of the indiscriminate killing of black people in the United States of America by agents of the state but a display of emotional and mental rage.

The group said it we would no longer watch how its brothers and sisters to be subjected to all manners of ill-treatment by law enforcement officers in the United States of America.

Led by its convener, Princess Ajibola, CALSER said the death of George Floyd is an act of barbarism that is being spearheaded by the white supremacists in the United States of America because Black Lives doesn’t matter to them.

Princess Ajibola said, “The Centre for Africa Liberation and Socio-Economic Rights have in numerous forums stated that it is indeed time for the blacks and Africans to take their destinies into their hands if we must survive the fangs of the whites whose desire is to see to the extinction of the entire black race in the world.

“These words of Martin Luther King reverberate till date in the United States of America and other western climes. And the question is, should we suffer untold hardship and persecution just because of the colour of our skin?

Should our children, brothers, sisters, fathers and mothers continue to be killed because we are blacks? We are gathered here to register our displeasure with the happenings in the United States of America where Black lives do not matter”she added

The group wants the Ambassador of the United States of America in Nigeria to convey its message to President Donald Trump.

“Our message is simple. Black Lives Matter and racial discrimination must stop in the interest of peace, unity and progress. If this does not stop Africans must take their destinies into their hands and fight for their rights because according to the Universal Declaration of Human Rights, we are all born free. We all have our thoughts and ideas, and we should all be treated the same way.

“The rights in the UDHR belong to everyone, no matter who we are, where we’re from, or whatever we believe. We all have the right to life and to live in freedom and safety. No one should be held as a slave, and no one has the right to treat anyone else as their slave.

“No one has the right to inflict torture or to subject anyone else to cruel or inhuman treatment. Nobody has the right to enter our home, open our mail, or intrude on our families without good reason. We also have the right to be protected if someone tries to damage our reputation unfairly.

Everyone has the freedom to think or believe what they want, including the right to religious belief. We have the right to change our beliefs or religion at any time, and the right to publicly or privately practise our chosen religion, alone or with others.

“And no government, group or individual should act in a way that would destroy the rights and freedoms of the Universal Declaration of Human Rights. These are provisions of the Universal Declaration of Human Rights. We at the Africa Liberation and Socio-Economic Rights stand in agreement with all these provisions in sending a message to the white supremacist in the United States of America that they are not superior to the blacks. Though the colour of our skin may differ, we are all freeborn, and we are a great people.

We are calling on all Africans to stand up for their rights. It is enough of the humiliation, the deprivation, the persecution, the annihilation, and the delineations. Africans are not slaves and would resist any form of slave treatments from those in positions of authorities in the United States of America and elsewhere in the world.

“The Centre for Africa Liberation and Socio-Economic Rights is sounding this warning to the United States of America to protect black lives in the country as the awareness is here to stay that never shall we ever allow our rights and privileges to be trampled upon anymore.

“The future is here, the future is black, and the future is Africa. We stand in solidarity with our brothers and sisters in the United States of America and other countries of the world with our strong fist in the air to say enough is indeed enough, and black lives matters.

“It is our wish that the Ambassador of the United States of America in Nigeria sends this message to the present administration in the United States that the rest of Africa is indeed watching on how it intends to write its name in the sands of time.

“Africa is watching how the present administration in the United States would do to make black lives Matter. Africa is indeed waiting to see that justice is served to the killers of George Floyd. As nothing short of that would be accepted or tolerated.

“That we are black does not mean our rights and privileges should be trampled upon. That happened centuries ago. We shall never allow a repeat now or in the future. Africans must unite in this critical point of our existence.

Thank you all for coming out despite the short notice, and I believe that our message would get to the relevant authorities in the United States of America”she concluded.