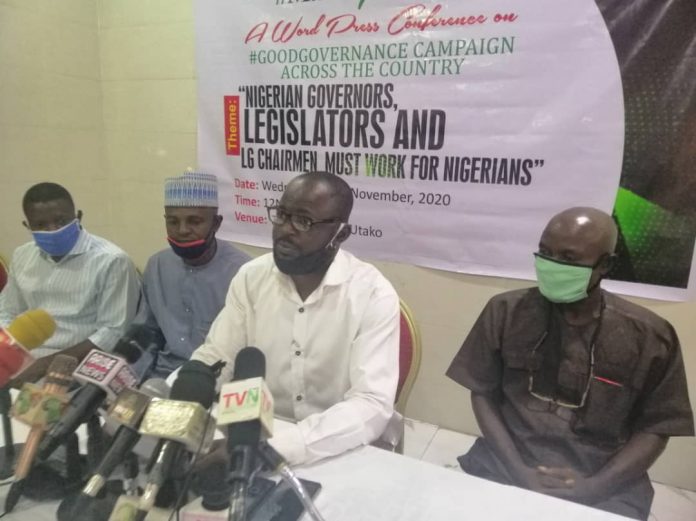 Some Nigerians have blamed the failure of state governors to deliver the dividends of democracy to their people for the civil unrest and insecurity witnessed in parts of the country.

The group, under the aegis of March4Nigeria Initiative, said the governors should be held responsible for the escalation of the EndSARS protest into violence.

Speaking at a press conference on Wednesday in Abuja, National Coordinator, Comrade Augustine Adie said some governors have constituted themselves into demigod, leading to agitations and disenchantments in the polity.

Comrade Adie noted that the “discovery of COVID-19 palliatives stored in various warehouses across the states is indeed a vindication of the efforts of the federal government towards improving the lives of the people in ways too numerous to mention”.

Describing the attitude as “appalling and inimical to sustainable growth and development in Nigeria”, the group said it is time for citizens to hold their governors accountable.

The March4Nigeria Initiative, however, tasked the governors to do the needful in their different states with regards to delivering the dividends of democracy.

It also hoped that the governors would admit their mistakes and retrace their steps in the way and manner they govern their various states.

Ladies and gentlemen, on behalf of the leadership of March4Nigeria, I warmly welcome you all to this press conference put together in the wake of the aftermath of the EndSARS protest in Nigeria that resulted in quite unpleasant events across the country.

The March4Nigeria Initiative is constrained to lend its voice to bring an end to bad governance in the country, which is rife at the state and local government across the country. We must all admit that the activities of most governors and local government administrators are somewhat responsible for the various agitations and disenchantments in the polity because these governors have constituted themselves into mini gods.

The recent discovery of COVID-19 palliatives stored in various warehouses across the states is indeed a vindication of the efforts of the federal government towards improving the lives of the people in ways too numerous to mention.

However, it has become clear that most governors are not in tune with reality either by omission or commission, as it is inexcusable for food items meant for the people during the coronavirus pandemic are kept from the people for God knows why.

The March4Nigeria initiative views such actions as counter-productive and ultimately against the interest of the country in this critical point of our existence, hence the need for demonstration of responsibility in governance at the state and local government levels because they are indeed accountable to the people that voted them into office.

The hoarding of the COVID-19 palliatives is just one example of how things are going wrong at the state and local government levels, which by and large undermines the efforts of the government at the centre.

When one takes a cursory look at budget performance across the 36 states of the country, one would be confronted with tales of underperformance and a lack of commitment to uplifting the standard of living of the people.

The March4Nigeria Initiative views such disposition as appalling and inimical to sustainable growth and development in Nigeria. It is also instructive to state that not until citizens start to ask questions on accountability from state governors and local government administrators, we would be going round in a vicious circle.

Citizens must be charged to ask questions on the performance of budget across the 36 states of the federation. Citizens must also demand transparency from governors in the conduct of state business, as only this can guarantee socio-economic development at the state and local government levels.

It is thus a statement of the fact that should the governors continue in such fashion, sustainable development would elude us, and we would all bear the brunt of our actions and inactions.

The March4Nigeria initiative is using this medium to task the various state governors to go to work and do the needful in their different states with regards to delivering the dividend of democracy to the people.

It is thus our considered opinion that if this attitude is replicated across the 36 states of the federation, Nigeria would be steady on the path of economic growth and development. Thus, the governors and local government administrators must shun all acts of corruption in their domains.

This is on the heels that the level of corruption at the state and local government levels is indeed mindboggling and should indeed be the focus of any genuine EndSARS campaign in the country. If this trend is no curtailed, sustainable development will continue to elude us and youth restiveness would not abate.

There must be an entrenchment of transparency and accountability in the states and local government to ensure that Nigeria makes substantial gains in our quest for development.

It is also our considered view that if there are no attitudinal changes on the part of governors; Nigeria might remain a project that won’t be completed for a long time to come.

The March4Nigeria Initiative is advocating for collectiveness and synergy between the federal government and the state governors towards ensuring that the people enjoy the dividends of democracy.

We thank you all for your time, and we desire that state governors would realize their mistakes and retrace their steps in the way and manner they govern their various states. This remains the only option left towards setting Nigeria on the path of greatness.

Thank you all, and God bless