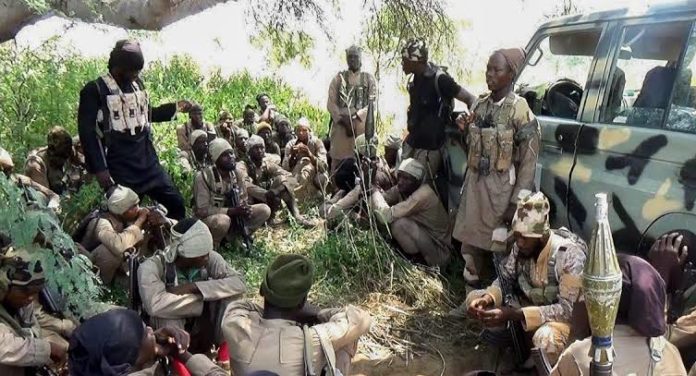 The Centre for Africa Liberation and Socio-Economic Rights (CALSER) has sounded an alarm over France’s alleged donation of weapons to Boko Haram/ISWAP terrorists, describing it as a “breach of international laws”.

The Centre brought this to the fore at a press conference on Tuesday in Abuja to address what it described as “reported concealed arms shipment into Nigeria from France”.

It will be recalled that the Nigeria Customs Service had reportedly seized a truckload of arms from the European nation, concealed as relief materials for Internally Displaced Persons (IDPs) in Borno State.

President Emmanuel Macron’s government has repeatedly been fingered to be sponsoring terrorism in Africa and the latest news further compounds the situation.

Princess Ajibola revealed that it was Macron’s government that pressurized the Republic of Chad to withdraw its 1200 from the collaborative anti-terrorism war in the areas where that country’s borders overlapped Nigeria.

CALSER, therefore, demanded that Nigerian authorities should proactively probe back to early period of the Boko Haram insurgency with a view to identifying the roles played by France.

It further called on the United Nations to investigate this provocation by France as it poses threat to world peace and stability.

While advising the Federal Government to boycott any diplomatic ties with the French nation, the Centre believes its Ambassador should be expelled until there is visible changes.

Gentlemen of the press, we invited you to this press briefing following the disturbing news backed up with images and videos of the discovery made by the Nigeria Customs Service of arms shipment from France into Nigeria. More worrisome is the fact that the shipment was disguised as relief materials for Internally Displaced Persons (IDPs) in the north-east of Nigeria, the same people whose lives have been upended by the terrorists being supported by France.

We have also noted that efforts are on by France, through its national broadcaster, France 24 and other willing platforms, to discredit the pictures by claiming that the seizure of the weapon caches was from another time and place or that the images had appeared under different circumstances and contexts. But to us in CALSER, that is the nature of propaganda – France is simply weaponizing information – manipulating facts to aid its destabilization agenda in Nigeria.

The discovery of the concealed stash of weapons is unfortunately not an isolated incident considering that IDPs had in the past reported aircrafts of French origin air-dropping supplies to terrorists at odd hours. It equally tallies with and answer the question of how Boko Haram and ISWAP terrorists come about the endless supplies of sophisticated firearms that encourage them to attempt taking on the military of nations.

The world must also not lose sight of the pressure that France mounted on the Republic of Chad to withdraw its 1200 from the collaborative anti-terrorism war in the areas where that country’s borders overlapped Nigeria. Terrorists have since started exploiting that vacuum to attempt incursions into Nigeria from Chad, which practically implies that France has pulled Chad out of the counter-terrorism war.

The combination of these developments has seen Boko Haram/ISWAP terrorists renew their murderous activities of killing innocent people, razing down communities, abducting women and children while actively attacking Christian Communities in what is an open attempt to spark off sectarian strife. This is the legacy that France is resolute on bequeathing Nigerians.

CALSER is today asking: France, why are you sponsoring a war on Nigeria? France why are you financing the abduction of our people, children and women? France, beyond the greed for cheap natural resources, what do you stand to gain from the bloodbath that you are promoting in Nigeria? When will France accept that the era of colonialism is long past and African countries should be the masters of their own destinies? What will it take for France to stop its war against the stability of Nigeria and by extension Africa?

We demand that the authorities in Nigeria proactively investigates not just this latest cache of weapons being sent to Boko Haram/ISWAP by France but should probe further back to cover the period of Boko Haram’s insurgency with a view to identifying the roles that France has played in the growth of terrorism in the region. The outcome of such probes should be made available to the relevant supra-national bodies, especially the United Nations (UN), which must step in to play its role.

The United Nations must step in to investigate this provocation by France because of the threat it poses to world peace and stability as well as the capacity to cause untold human suffering for Nigerians.

Nigeria must also not rule out expelling the French Ambassador to Nigeria until that country decides to act responsibly and call off its attacks against Nigeria by cutting off support for terrorists that are troubling Nigeria.

On their part, Nigerians should begin a boycott of all goods and services of French origin as a way of expressing their displeasure at the massacre being planned against them by France. Nigerians should further prepare to take their own destinies in their own hands by moving in on French interests in the land where it fails to halt its assault on Nigeria.

Thank you for listening.