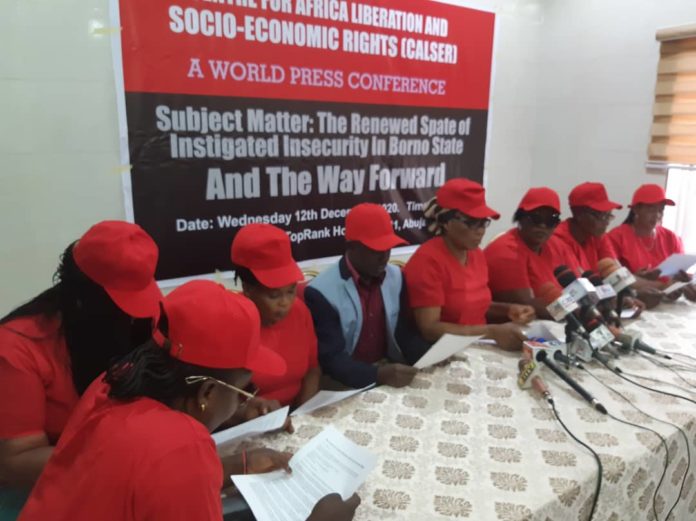 The Centre for Africa Liberation and Socio-Economic Rights (CALSER) has called on President Muhammadu Buhari to forthwith declare a state of emergency in Borno State.

This is on the heels of what it described as politically instigated killings in the state, targeted at destabilizing the Buhari administration.

At a press conference on Wednesday in Abuja, Convener, Princess Ajibola condemned the renewed spate of insurgents attacks in Borno state.

The group wondered why Borno is overly targeted for renewed insurgent attacks despite the concentration of troops in almost all the communities in the state.

CALSER alleged that Governor Babagana Zulum and his predecessor Senator Kashim Shettima know about the spate of insecurity in the state.

The Centre for Africa Liberation and Socio-Economic Rights, therefore, called for total declaration of a State of Emergency in Borno State in order for the relevant authorities to get to the root cause of the renewed terrorist activities.

The group further demanded that Zulum step down to allow for full presidential powers to restore peace and security in the state.

I welcome you all lovers of democracy and unity of Nigeria. Ladies and gentlemen of the revered press. Stakeholders. Representatives of Civil Society Organizations. Others here present.

We stand on existing protocols.

“The Urgent Need for the declaration of A State of Emergency in Borno State.”

The urgency of now requires that urgent and proactive measures are put in place or enacted by those vested with such responsibilities in the overall interest of the country.

The leadership of the Centre for Africa Liberation and Socio-Economic Rights wishes to condemn in its entirety the renewed spate of insurgents attacks in Borno state, with the latest which recently happened in Auno community where some unscrupulous elements elected to set vehicles, building and human beings on fire for no justifiable reason.

This act is not only an affront to our collective sensibilities as a people; it indeed speaks volumes of some conspiracy theory that does not want the war against Boko Haram terrorists to come to an end so they can continue to hide under that cover to fleece the people of their commonwealth.

We are particularly alarmed as to why in the whole of North-East Nigeria; Borno state is the only state that is witnessing renewed insurgent attacks despite the concentration of troops in almost all the communities in the state, including those that are impassible due to the failure of the government to provide the necessary amenities for human habitation.

There is indeed more than meets the eyes, and it is consequently our considered opinion that questions must be asked and answers must be provided by the political leadership in the state that have chosen to grandstand at the detriment of assisting the military in its quest to route remnants of Boko Haram/ISWAP out of Nigeria completely.

We wish to state that the way and manner the Governor of Borno State, Professor Babagana Zulum have been soliciting for headlines in the newspapers is indicative of a plot to discredit the efforts of the Nigerian military and portraying a picture of failure in leadership on the part of the military, whereas, the reverse is the case.

In the light of the revelations, we wish to state that, indeed, Governor Babagana Zulum and his predecessor Senator Kashim Shettima are suspect in the spate of insecurity in Borno state because it is apparent that they have more skeletons in their cupboards to hide from the public.

As a means of diverting the attention of the public from their despicable act of depriving the people of the necessities of life that would aid their resettlements back into their communities, they have elected to sponsor violence in some parts of the state to achieve their inglorious objective.

The Centre for Africa Liberation and Socio-Economic Rights wishes to state that since local government funds are under the direct control of the governor since the insurgency has affected political administration at local government levels, and the recent call for the restoration of Local Government system across Nigeria as enshrined in the Constitution of the Federal Republic of Nigeria, the governor of Borno State, Babagana Zulum and his immediate predecessor and godfather Kashim Shetimma would hear none of that because of the quantum of revelations that would occasion it.

In the light of these, they have elected sponsor acts of violence at various local government areas, especially in places where they have committed economic and political atrocities in an attempt to cover their tracks.

The fact that the Honorable Minister of Justice and Attorney General of the Federation is enforcing the constitutional declaration of the restoration of local government system in all the 36 states could be responsible for the politically perpetuated unrest witnessed in Borno State, so much so that the question is: Why only Borno State in the whole of North East?

In the light of the above-mentioned, the Centre for Africa Liberation and Socio-Economic Rights wishes to call for a full and total declaration of a State of Emergency in Borno State. This is necessary for the relevant authorities to get to the root cause of the renewed terrorist activities in the state.

The governor of Borno State must step down to allow for full presidential powers to restore peace and security in the state and to also allow the deprived and exploited people of Borno State some relief. And the Theatre Commander of Operation Lafiya Dole is appointed to oversee the affairs of the state until normalcy returns. This, we believe, is necessary for the quest for the restoration of lasting peace and tranquility in Borno State.

The Centre for Africa Liberation and Socio-Economic Rights wishes to state that if indeed the federal government is desirous of finding lasting peace in the North East region, the example must be set from Borno State by declaring a state of emergency.

This, we believe, would be in the best interest of the people of the state whose commonwealth has been hijacked by a few greedy people that was vested with the responsibility of making life meaningful for the people.

The time to act is now. We thank you all for the rapt attention, and it is our earnest prayer that the Federal Government acts in the best interest of the people.