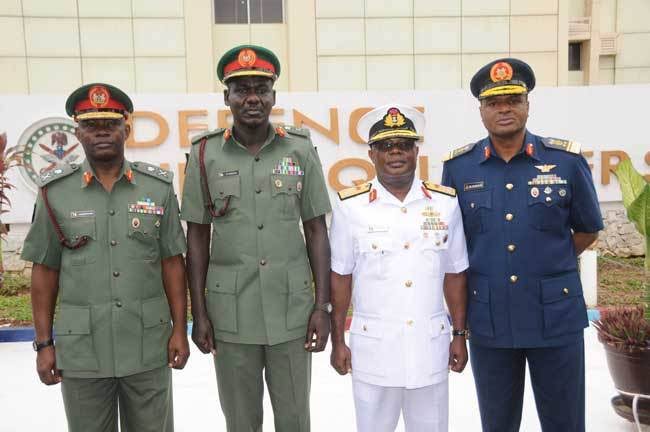 The Network for Justice and Truth (NJT) has urged Nigerians to disregard the International Society for Civil Liberties & Rule of Law (Intersociety) and its call for the sack of the Service Chiefs.

NJT alleged that Intersociety is an arm of the Indigenous People of Biafra (IPOB) and like the proscribed group, it has a long history of violence, killings and unrest with an inexplicable animosity for President Muhammadu Buhari.

Intersociety had accused the military’s top shots of manipulating the Armed Forces service rules and Nigerian constitution to extend their tenure of office indefinitely.

However, in a statement signed by its President, Dr Ifeanyi Anayo Dike, on Friday, NJT described the group as “ignorant”, only carrying out the wishes of its paymasters.

It added that such insinuation in all ramification is lacking in merit, objectivity and above all against national interest.

NJT, therefore, called on the unsuspecting general public to ignore the statement from Intersociety as there is no iota of truth in the various allegations against the Service Chiefs.

While warning Intersociety and their sponsors to desist from their nefarious activities, the Network for Justice and Truth urged other security stakeholders to extend their unalloyed support to President Buhari and the Service Chiefs.

The Network for Justice and Truth wishes to draw the attention of the general public to the threats posed by the International Society for Civil Liberties & Rule of Law (Intersociety) to peace and development in Nigeria.

Intersociety, as an organization over the years, have been known to turn the truth on its head through its activities, especially with regards to issues of national interest such as sustainable peace and development.

It is a known fact that their hatred for the administration of President Muhammadu Buhari has been hinged on the tough stance on the activities of terrorist and militant groups in the country.

The Network for Justice and Truth is consequently not surprised by its highly misleading statement accusing the Service Chiefs of manipulating the armed forces service rules and Nigerian constitution to extend their tenure of office indefinitely.

The statement by Intersociety is at best uncharitable and an exhibition of crass ignorance on the operations of the security sector in Nigeria. This is aside from the fact that the group, by all intent and purposes, are carrying out the wishes of their paymasters that are against the interest of Nigeria.

It is appalling as well as despicable for intersociety to attempt to insult the sensibilities of Nigerians with its diatribe on the Service Chiefs that have exhibited a high level of professionalism and dedication to preserving the territorial integrity and sovereignty of Nigeria.

The Network for Justice and Truth wishes to advise members of the unsuspecting general public to disregard the statement from Intersociety in its ramification for lacking in merit, objectivity and above all in the national interest.

We wish to state that Intersociety is playing the card of a greater plot by some disgruntled politicians that have in numerous times attempted to take over the affairs of the country through the back door having failed woefully at the general elections.

It is therefore not surprising that Intersociety has been recruited into the plot because of its cash and carry policy and as well as its avowed sympathy for separatist and militant organizations in Nigeria.

It is, therefore, a statement of the fact that their gross with the Service Chiefs is their refusal to allow the disintegration of the country into fragments for the benefit of their sponsors despite the massive amount of monies deployed for the purpose destabilizing the country by the  sponsors of acts of criminality across the country.

These dissident elements have continued to demonstrate their hatred for the Muhammadu Buhari administration and other well-meaning stakeholders who have to keep sleepless night to prevent the country from collapsing into the abyss.

It must be stated that Intersociety is indeed an affiliation of militant groups in the country. They have been known to be providing covert support to these groups and with the tough stance of the service chiefs in ensuring that their nefarious activities are curtailed to the barest minimum is giving organizations like Intersociety sleepless nights.

Consequently, their agenda is to trigger violence across the country using phantom and unnecessary allegations against the Service Chiefs in the country as in this case which the generality of Nigerians must be aware of.

We wish to use this medium to inform the members of the unsuspecting general public to disregard the statement from Intersociety as there is no iota of truth in the various allegations against the Service Chiefs.

The Network for Justice and Truth and the generality of other well-meaning stakeholders in the critical security sector in Nigeria extends their unalloyed support to the administration of President Muhammadu Buhari through its numerous efforts towards curtailing the politically instigated acts of terrorism and criminalities in the country.

The likes of Intersociety and their sponsors must desist from their nefarious ways in the interest of peace and tranquillity in the country. They must also leave the Service Chiefs to concentrate on that task at hand as this is not the time for distractions.

It is advised that this is indeed the time for all and sundry to continue to extend their support to the Armed Forces of the Federal Republic of Nigeria in this critical point of our existence.