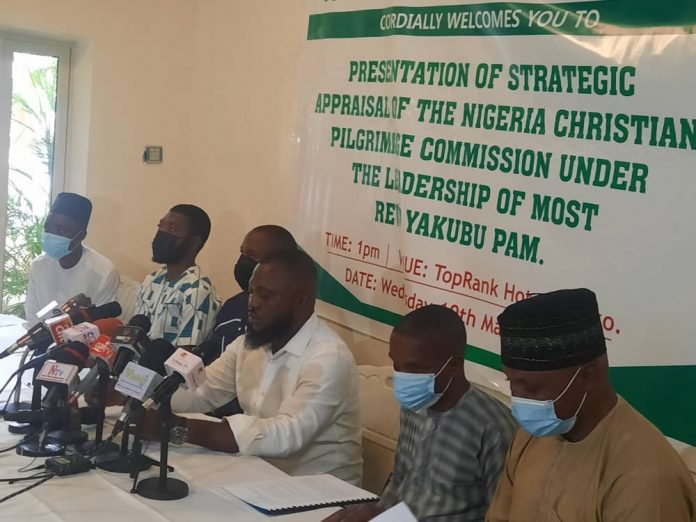 The group, under the aegis of Young Christians Forum of Nigeria (YCFN), said the commission has recorded tremendous progress in its operations in the last 10 months.

The Christain youths made this known in a strategic report released on Monday after a thorough appraisal of the NCPC’s activities in fulfilment of its strategic mandate in the country.

A veteran preacher of over three decades, Pam’s appointment in July last year was greeted with excitement owing to his deep knowledge of the commission and understanding of inter-religious harmony and conflict resolution in the country.

And in the report signed by its President Rev. Enya Peter, the group said Pam has entrenched transparency, accountability and probity in NCPC’s operations.

The Christian youths, therefore, admitted that Rev. Pam has so far set lofty standards and urged other government officials to emulate his lead to attain sustainable growth and development in the country.

While calling on the Executive Secretary and his team not to relent but continue to introduce more positive policies and initiatives, the body also urged relevant stakeholders to continue to extend their support to him.

The mission of the NCPC is to provide a conducive environment for the smooth airlifting of pilgrims to Holy sites and to ensure enhanced welfare, responsible leadership at all levels, Federal and States, for hitch-free pilgrimage exercise throughout the year; and to supervise any interested body or organisation for Christian Pilgrimage to the Holy sites globally.

On this heel, the Young Christians Forum of Nigeria undertook a strategic assessment of the NCPC, intending to identify the efforts of the present leadership toward fulfilling the mandate of the organisation.

The assessment report identified key governance indicators aimed at critically assessing the operations of the NCPC to put issues in proper perspectives for members of the general public with regards to the leadership of the organisation.

This report relied on primary sources of data that includes but not limited to interviews, distribution of questionnaires, news reports, feedback from pilgrims and other critical stakeholders.

The assessment report revealed a dynamic organisational structure at the Nigeria Christian Pilgrimage Commission led by its Executive Secretary Yakubu Pam, who, upon assumption of office, introduced far-reaching measures towards repositioning the NCPC. It was also discovered that the operations of the various zonal offices had been boasted for optimal performance through periodic strategic assessment and feedback mechanisms from intending pilgrims across the country. This much was also identified in the seamless procedures for intending pilgrims scheduled to undertake a pilgrimage to the holy land.

The Executive Secretary also introduced incentives for staffers towards enhancing their productivity in the discharge of their responsibilities, which has led to an improvement in the operations of the NCPC.

The report also identified transparency and accountability as the core of the operations of the NCPC. According to information gathered, the entrenchment of transparency and accountability has seen a drastic improvement in the processes of the NCPC. This much was corroborated by staffers, pilgrims, stakeholders and regulatory authorities under whose purview the NCPC falls.

The report identified that under the leadership of the Executive Secretary, the NCPC had received numerous commendation as an example in the conduct of government business that is devoid of any form of anomaly or unwholesome practices.

This much has gone a long way in the restoration of confidence regarding the judicious use of funds available to the commission for its day to day operations. The mechanism put in place to ensure transparency and accountability is also topnotch and quite commendable as there are various checks and balances to ensure that the processes and procedures of the commission are not violated at any point.

Thus, it is a statement that the NCPC ranks high in the prudent management of resources, which is lofty and should serve as an example to other government agencies.

It was observed that the operations of the NCPC are anchored on probity, and this drive is led by the Executive Secretary, who, alongside the management team, has provided sound and exemplary leadership.

It was discovered that the NCPC has been able to record a complete turnaround in its operations in record time due to the aforementioned, which are laudable and strategic toward achieving the mandate of the NCPC.

The NCPC, under the present leadership, has been noteworthy in the engagement of relevant stakeholders in Nigeria and partner countries in ensuring the success of its operations. It was identified that the various stakeholders had extended commendation to the leadership of the NCPC for recognising the importance of stakeholders’ engagement in its critical operations.

It was observed that the leadership of the NCPC had placed a premium on the welfare of staffers, which has translated to an astronomical level of productivity in a positive workplace environment.

This much was also corroborated by the workplace ambience occasioned by mutual respect and collaboration amongst staff.

The Young Christians Forum of Nigeria, as a result of the strategic assessment of the NCPC, wishes to state that under the leadership of the Executive Secretary, Yakubu Pam, the organisation has recorded tremendous progress in its operations. The entrenchment of transparency and accountability stands as one of the organisation’s hallmarks and primarily responsible for its smooth operations over the years and in record time.

We consequently wish to add that the various initiatives introduced in the organisation are noteworthy and should be emulated by others in the position of leadership in the country towards attaining sustainable growth and development in the country. The Executive Secretary of the NCPC has set lofty standards that by all indication were brought about by the provision of sound leadership and a passion for service.

It is, therefore, our conclusion that the NCPC under the leadership of Yakubu Pam is well positioned towards attaining its mission of an organisation with high spiritual content capable of being translated into action for national development, security, probity and accountability, in line with the policy of the Federal Government of Nigeria.

The Young Christians Forum of Nigeria, as a result of this, makes the following recommendations:

The relevant stakeholders should continue to extend their support to the leadership of the NCPC by making suggestions that would assist in fulfilling the mandate of the organisation.

That the leadership of the NCPC should not rest on its notable achievements but to continue to introduce policies and initiatives that would ultimately boost its operations in ways too numerous to mention.

The Executive Secretary and the management team should continue to provide sound and credible leadership at all times.