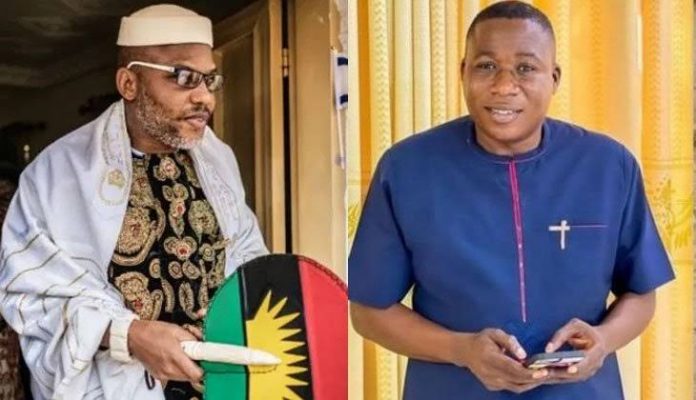 The Conference of harmonised Civil Society Organisations in Nigeria, COHCSON has raised alarm over alleged plots by the Indigenous Persons of Biafra (IPOB) and the Yoruba Nation agitators to infiltrate judicial officers.

COHCSON President,  Solomon Semaka at a press conference in Abuja said following an emergency expanded meeting of the COHCSON, there is need to condemn what is turning out to be an execution of a detailed plan to subvert and undermine  the country’s judicial system.

He said,  “When we first heard that the dissident and seccesionist IPOB and Yoruba Nation groups were planning to infiltrate the courts at all levels we dismissed the allegations. But latest developments have indeed forced us to raise this alert.

He said it has come to the notice of  the groups that they are resorting to blackmail and intimidation to hoodwink the judges into granting them unmerited judicial favours.

“Recently a State High in Oyo State presided by Justice Ladiran delivered a judgment in favour of Sunday Igboho and awarded him 20billion naira as claims.

“As part of the evil plots, IPOB has instituted a 5Billion naira case at the Abia State High Court Umuahia where a Judge would, out of fear of harassment and violence, grant them the plea. It has become obvious that IPOB intends to use its violence stricken sit-at-home enforcement style to force the judges do their bidding.

“On the case of Igboho, we are aware that having failed to secure his release from  Benin Republic authorities, the leaders  resolved to raise  funds to patronise friendly judges in Nigeria who are sympathetic to their cause. A serving governor  in the south West appears to be part of the plot. The leaders  in that meeting also agreed to sponsor more rallies  abroad to give Nigeria a bad image internationally. Aside raising  funds from diaspora groups and  individuals who share in the evil dream of dividing the country, the group agreed to shop for a friendly judge to award them claims against the government  thus the 20billion naira.

“We are aware too that the representative of IPOB was mandated in their last meeting in Benin Republic to also institute a fresh suit against the federal government agents.This fresh suit by IPOB though an afterthought which confirms our position. These judges at the state level are said to be emotional attached to their ethnic groups and the separatists.

“We like to use this medium to appeal to  judges and lawyers to resist the temptation to betray their secret oath of office and to stick to the law in the over all interest of the country. No amount of inducement should entice any patriot to endanger  the lives of over two hundred million Nigerians. Judges and lawyers who administer justice should be reminded that the survival of nations depends on the patriotism of the judiciary

“Following deliberations by the representatives of IPOB and Yoruba nation agitators , they had set up a fund raising Commitee to raise a financial war chest to compromise the judges and confront the Nigerian Government. So far, the groups have raised a huge sum in dollars to bribe  two  judges in the south west and now South East? Why would judges be induced if the litigants have no predetermined motive? Are they already aware of the legal outcomes, having successfully bribed their way through?

“We are using this opportunity to appeal to the national judicial council (NJC) to rise to the occasion and sanction erring judges. The recent warning  given by  the Chief Justice Of Nigeria should be enough to guide the Honourable Judges. No desperate seccesionists should be allowed to rubbish our collective unity and threaten our sovereign existence or undermine the integrity of our courts”he said

The group urged the Chief Justice of Nigeria to caution  chief  judges of states to monitor developments within their durisdiction in the interest of the nation and the integrity of the judiciary.

“We request the chief  judge of Abia state to reassign the suit filed by IPOB lawyers at the Abia high court or the Judge should recuse himself.

“We do not have confidence in a few identified judges to sit on the cases in question. Available evidence  suggest glaring  judicial  bias and solidarity for one party, IPOB and Yoruba nation agitators as well as politicians.

“Gentlemen of the press, it is now your duty to utilise your platforms to enlighten and educate  Nigerians to rise up in defense of our judicial heritage and preserve our sovereingty” he said.