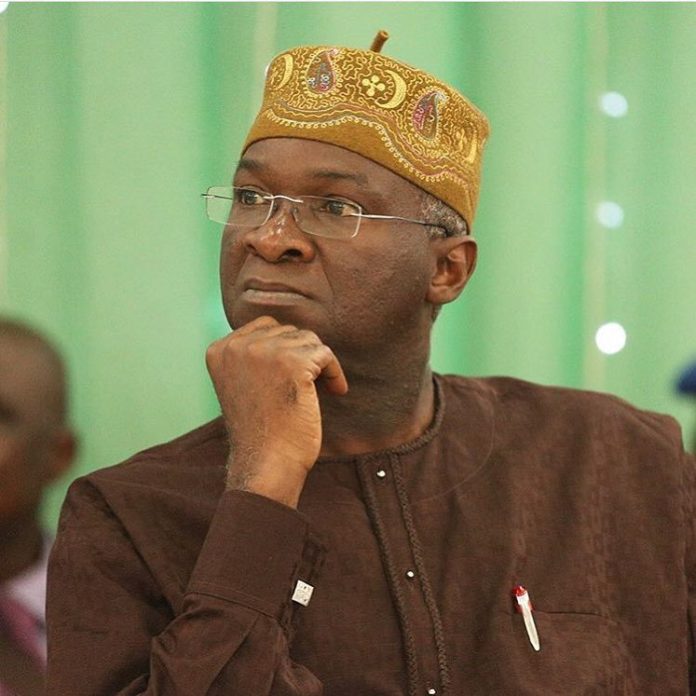 The statement that roads in the country are not as bad as they are portrayed, attributed to Babatunde Fashola, Minister for Works and Housing, has earned him a response from a member of the House of Representatives, Bamidele Salam.

Mr Salam (PDP–Ede North/Ede South/Egbedore/Ejigbo federal constituency) challenged Mr. Fashola and other relevant stakeholders to boycott air travels for road ones for the next 90 days in order to estimate the ratio of good to bad roads in the country.

Mr Fashola had on Wednesday while addressing state house correspondents after the Federal Executive Council (FEC) meeting, said: “The roads (in the country) are not as bad as they are often portrayed. I know that this is going to be your headline, but the roads are not that bad.”

But Mr Salam, while speaking with journalists Thursday, chided the minister.

“I found this statement, which had been repeated by the Hon Minister at least on two previous occasions as a clear indication that some of us in public offices are not at all in tune with the horrendous realities of our fellow citizens’ daily experience.

“Appreciating what Nigerians go through on our bad roads daily, requires that public office holders put themselves in the shoes of the average Nigerian and get a firsthand experience of how Nigerians survive on a daily basis.”

The rep member said “it is only when the minister, as well as other relevant stakeholder, travel the roads in the country for a reasonable length of time would they understand the yearnings of Nigerians.

“As a Member of the House of Representatives Committee on Works, I will be throwing a road travel challenge to the Hon Minister and all persons concerned to avoid air travel for all local trips in the next 90 days.

“If we will agree to this challenge, we may come back with a better appreciation of the true state of our road infrastructure and the desperate things we need to do to save our economy from further disruptions as a result of the burgeoning crisis in the road transportation sector,” he said.

Meanwhile, the minister’s description of a bad road has received strong pushback from Nigerians, many of whom ply the roads.

Road mishaps, which also led to the recent inferno that razed a market in Onitsha, have been attributed to be a function of, apart from reckless driving, the deplorable roads that litter the country.

The Federal Road Safety Corps says that at least 1,618 people have lost their lives through road accidents between December 2018 and February 2019.

Nigerians on social media advised Mr Fashola to do a reality check on the said roads and not mere verbal assessment of them, with some offering to show him around. – Premium Times