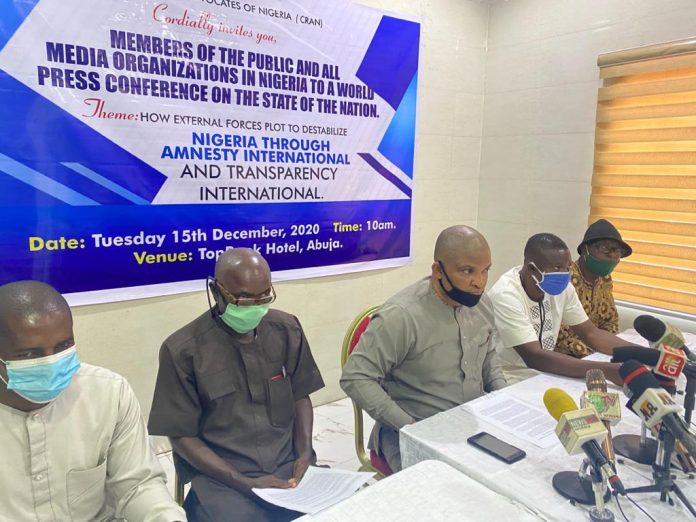 Amnesty International, Transparency International and other acclaimed international NGOs have conspired with several Civil Society Organisations in the country to fabricate and present false evidence against the Armed Forces of Nigeria to the International Criminal Court, a rights group has said.

According to the Civil Rights Advocates of Nigeria (CRAN), both foreign groups have already paid a whopping $1,750,000 to the ICC to arrive at a verdict against Nigeria.

The CRAN further revealed that the local CSOs are the next in line to receive their share of the fortune in exchange for fake evidence and malicious reports that would align with the ICC’s position.

This damning revelation was made public at a press conference on Tuesday in Abuja by CRAN’s president, Daniel Obaje.

The CRAN noted that the said funds would be disbursed similarly as during the #EndSARS movement to recruit, train and empower actors to discredit military personnel.

The group said the ultimate is to weaken the Armed Forces ahead of the second wave of politically instigated protests across the country which has been slated to commence in Mach 2021.

The rights group, however, vowed to expose AI, TI and their cohorts to show the world their true colours.

Gentlemen of the press, we wish we have good news to share with you are here to honour our invitation, but sadly, there is no good news here. We have sombre news for you, and it is to the effect that those that are out to sabotage Nigeria have not relented. They have instead perfected their plan in a manner that shows that there has to be a radical shift in the way Nigeria relates with known enemies so that it can better manage the security breaches that are taking different dimensions with each passing day.

We want you to recall the #EndSARS protests, the sheer scale of violence inflicted on Nigeria by those protests, and the seeming inability of the military services with their other counterparts to respond. Please note that by the virtues of the bank accounts that the Central Bank of Nigeria (CBN) later secured court orders to freeze we have now become aware that people were paid to carry out those protests.

The second thing to note is that the inability of the military and the police to stop the orgy of destruction did not befall them overnight.  The demoralization and incapacitation of these institutions took a long time in the making. It was insidiously done over a period using fabricated reports that indict the security apparatus of the country daily. They have created an atmosphere of fear that makes it impossible for the relevant agencies to respond without being afraid of the woke brigade that has been positioned to second guess their every move and labels them as the offending party even when fighting with terrorists.

Further note that during and after the protests, there was a full-fledged command and control operation that churned out fake news against the government of the Federal Republic of Nigeria and its agencies. That command-and-control operation reportedly functioned from Canada where NGOs, particularly the international ones and their local affiliates vocally presented alternate fact in a bid to stack on one more layer of lies to discredit the military establishment and other security agencies. In achieving this, all stops were pulled as these NGOs even canonized know terrorist organizations like the Indigenous People of Biafra (IPOB) and the Islamic Movement in Nigeria (IMN) with the toga of respectability.

It is therefore not surprising that the Prosecutor of the International Criminal Court (ICC) has joined the chorus of those executing these false flag operations. The ICC recently declared that it plans to investigate the Nigerian military for a wide range of human rights violation, even though it made clear that the military was nowhere near the crimes committed by Boko Haram, it nonetheless decided to work with partners who focused on the military and blew the accusation out of proportion. The reality is that the ICC has proven itself to be an organization that has tied itself to the hem of Amnesty International and the interests it represents, globally and here in Nigeria.

Like every other right-thinking person who was puzzled at the decision announced by the ICC, we find it odd that the creation of the Rome Statute has become a willing tool in the hands of the highest bidder, one that would stand logic on its head, support terrorists by failing to order their arrest and vilifying agencies of the Nigerian State.

What is surprising is the extent to which the ICC is in bed with organizations that run campaigns that are in clear violation of what the Court stands for. We have learnt that Amnesty international and Transparency international provided the sum of $1, 750,000, out of which officials at the ICC were facilitated to arrive at a recommendation that will be damning of Nigeria. we have credible information that the amount was paid into an account outside Nigeria while more fund is still being expected into the account. This same approach was adopted in financing the #EndSARS protests hence the subversion related transactions that made the CBN order the freeze on some accounts.

We have reliably gathered that the Nigerian Armed forces are now the new target of character assassination to weaken it before the second wave of politically instigated protests across the country which has been slated to commence in Mach 2021.

Nigerians should be concerned at this substantial dollar amount was provided by entities acting for Amnesty International and Transparency International. Please, we urge you to go and research the boards of both organizations and you will discover that the same set of people are running this gig. The investigation that the ICC said it wants to launch has been paid for and bought. They want the ICC investigation to end up with a report that fits into their agenda. These organizations have recruited, trained and empowered actors and discredited military personnel with their faces covered; their objective is to present damaging reports against the Armed Forces of the Federal Republic of Nigeria. The media arm of this cartel is on standby to manipulate public perception of any resulting investigation. CNN and Sahara Reporters are waiting in the wing to run negative coverage of same.

Gentlemen of the press, we, therefore, find it pertinent to expose Amnesty International and Transparency International and show the world their true colours. We demand to know from these two organizations why they are sponsoring covert operations against the institutions of the Nigeria state. We want to know their motive in the country.