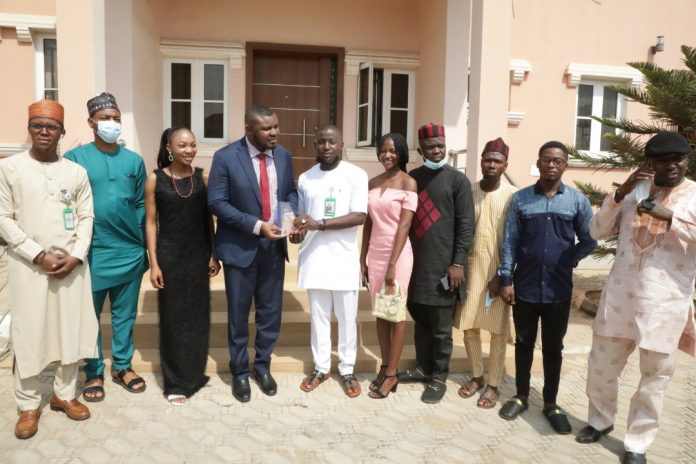 The National Association of Idoma Students (NAIS), on Wednesday, honoured the Chief Executive Officer of the TheNigerian News Group, Chief Philip Agbese, with an award of excellence.

The group, during a courtesy visit to the organisation’s corporate headquarters in Asokoro, Abuja, said the award is in recognition of his notable impact in the area of education, youth empowerment and social development.

Presenting the award to Agbese, who is a House of Representatives hopeful for Ado/Ogbadigbo/Okpokwu federal constituency, NAIS president, Comrade Fod Oche, said the body is fully behind his quest to represent his people in the ‘green chamber’.

Fod, in the company of his deputy, Comrade Ogwiji John Ogbe and other NAIS national executives assured the ‘Okanga of Agila’ of victory in the polls come 2023.

“This award of excellence is in line with your generosity and magnificent gesture in Idomaland and the country at large,” Fod said.

In reaction, Chief Agbese dedicated the accolade to President Muhammadu Buhari for his giant strides, especially in the area of education.

He noted that for the first time in history, Benue, his state of origin, has two federal universities, thanks to President Buhari.

Agbese also recalled his journey as a young man, scrapping the barrels at the University of Ilorin, dropping out during his final year.

The All Progressives Congress stalwart, who would go on to obtain two degrees at the Middlesex University London, said his experience should challenge every Nigerian student.

According to Agbese, ” education is the only leveller that provides the avenue for the poor and rich to be equated”.

He noted that the ongoing ICT centre in Apa Agila in Benue is just a tip of what to come as he promised to establish at least one in each of the 35 wards in his constituency.

He, however, urged the body to identify with other distinguished sons of Idomaland, striving in various fields of endeavour ” so that they can key into the developmental project of Idomaland”.