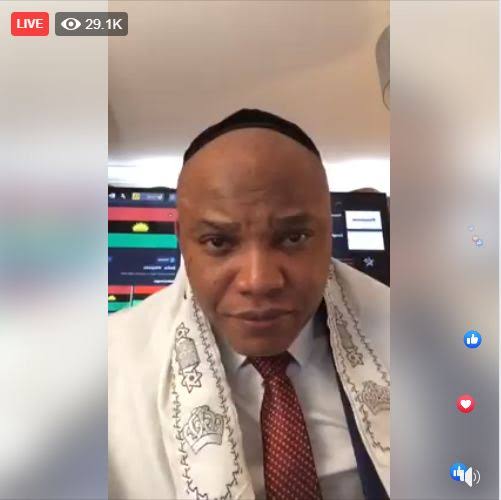 The Igbos in Nigeria Movement (INM) has alleged that some imposters posing as the leader of the Indigenous People of Biafra (IPOB), Nnamdi Kanu are operating his social media accounts insisting that he is dead.

According to the southeast group, Kanu is dead and anyone behind his double body should be immediately arrested and prosecuted.

INM made this known in a statement signed by its Secretary General Mazi Chijioke Udenwa on Monday.

The group insisted that there are a cloned version of Kanu known as ‘Pascal’ currently impersonating the ex-IPOB leader and .

INM, however, advised youths not to be misled by these agents of confusion, exploiting Kanu’s identity for their selfish interest.

The group further urged the Nigerian Army to disregard the lies coming from Pascal as it has always been known for patriotism and remains one of the beacons holding the nation together.

Nigeria Movement has observed that the alleged clone of the late Leader of the Indigenous People of Biafra (IPOB), Mazi Nnamdi Kanu, hacontinuedue to impersonate the deceased towards ends that are not clear at the moment.

The latest of such ploy is an anti-Nigerian Army post on Kanu’s social media accounts that again promised that Pascal, the cloned version of Kanu will address certain issues live in the bid to distract the military from the final onslaught it is unleashing against Boko Haram.

In further proof that those currently impersonating Kanu, including Pascal the clone, have no idea of the depth of discourse that the late activist had engaged in the past. This is why it was possible for the impostors to again surface the issue of the Nigerian Army’s insignia having Arabic inscriptions on it. Kanu had conclusive dealt with the matter in the past and would not have stooped so low as to recycle his thoughts at a time when the world, including the Igbo nation, is facing existential threats.

Had these rabble rousers taken time to research they would have found out that the inscription they are hyperventilating over means “Victory Comes from God Alone” which only have to insist that authorities also inscribe in anglicized Igbo texts as “Mmeri Si n’aka Naanị N’aka Chineke”.

But we do not expect such reasoning from people that have been so consumed by their misplaced and misdirected hatred that they are willing to cut their nose to spite their face. This is why the ongoing successes of the military in the ongoing fight against Boko Haram has become a source of worry to the promoters of the cloned Kanu body double that they want to get back at the Army through divisive posts and clear attempts to instigate disloyalty.

Should our youth be misled into abandoning the Army like these clone sponsors desire it would be the undoing of Igbos as they would be edged out of seniority and ranking. Nigerians and particularly our Igbo sons and daughters in the military are urged to disregard the lies flowing from these trouble makers.

INM is aware that Kanu is dead, which is why we hereby call for the immediate arrest and prosecution of all those behind his body double. Their continuing to exploit the identity of a deceased person is a serious security threat that must not be ignored since these same people will eventually attempt to provoke a pogrom against the Igbo just to validate the false claims they have been making.

We appeal to the Nigerian Army to disregard the lies coming from Pascal the Clone. The Nigerian Army has been known for her patriotism and remains one of the beacons holding the nation together. The accusation made in the misleading social media posts is one that should not have been directed at the Army because a respected institution like that should never be dragged down to the level of having to manage the lies being told by clones. An Army that had refused to join issues with Kanu despite his many provocations while alive should not now be seen responding to a copy.