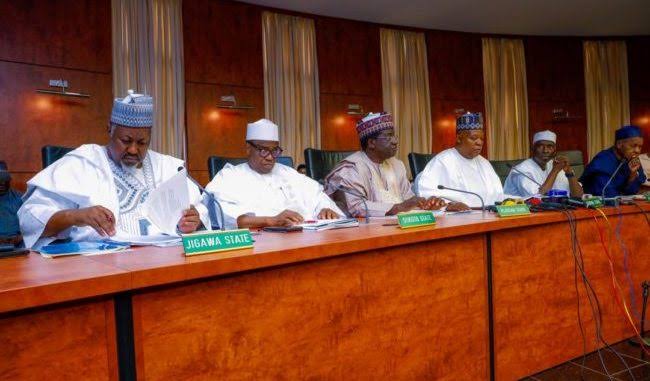 The Progressives Govermors Forum (PGF) on the platform of the All Progressives Congress (APC) has said the allegations of manipulation made by the opposition Peoples Democratic Party (PDP) after the recent Supreme Court judgement were not only depressing but disrespectful and contemptuous.

The ruling party’s forum of govermors however, warned the PDP to stop unnecessary castigation of the Judiciary.

In a statement signed Saturday in Abuja, by its Chairman and governor of Kebbi state,Abubakar Atiku Bagudu, reacting to the comments credited to the National Chairman of the PDP, Uche Secondus after the Supreme Court ruling in favour of APC, its governor forum called on Nigerians and all lovers of democracy in the country to rise to the defence of democratic institutions, especially the judiciary.

“Following the verdict of the Supreme Court in respect of Imo State election petition, which declared Sen. Hope Uzodinma of the All Progressives Congress as the winner of the March 9, 2019 Governorship election, the National Chairman of the Peoples Democratic Party (PDP) proclaimed the judgement as “miscarriage of justice” and alleged that the judiciary is “heavily compromised” and has “lost credibility”.

“These are depressing allegations coming from supposedly democratic leaders who should ordinarily be in the forefront of protecting and defending the judicial institution as the sanctuary of our democracy. It is contemptuous and disrespectful to our democracy.

“This is most unfortunate and condemnable. We call on Nigerians and all lovers of democracy in the country to rise to the defence of our democratic institutions, especially the judiciary.

“We must prevail on the PDP leadership and all politicians to exercise restraint by demonstrating unalloyed loyalty and respect for our democratic institutions, particularly our judiciary, which is the most important pillar of democratic governance. To allege that a judgement delivered by Supreme Court Judges is “procured” simply because it does not favour the PDP is an invitation to anarchy.

“It is on record that President Muhammadu Buhari has at all times stated his commitment to democracy and rule of law. Our party has lost elections we thought we will win. Equally, our party has been stopped from participation in elections by the judiciary, for example in Rivers State.

“The case of Zamfara where we won the election but the Supreme Court in its wisdom nullified all our votes and declared PDP candidates as winners is another experience. In addition, our party members have lost many cases, and even though our views differ from the judgement delivered, we do not disparage the judiciary, yet our views of the judgement differ from the court.”

While assuring that the forum that APC governors will continue to work with all democrats in the country to ensure adequate protection of democratic governance by respecting all judgements from courts, the Kebbi state governor said: “As Progressive Governors, we hereby declare abiding faith in our judiciary and will at all times respect all decisions of our Judges at all levels no matter the circumstances. Our party and our members believe in the sanctity of our judicial institution as the last hope for justice for our people.”