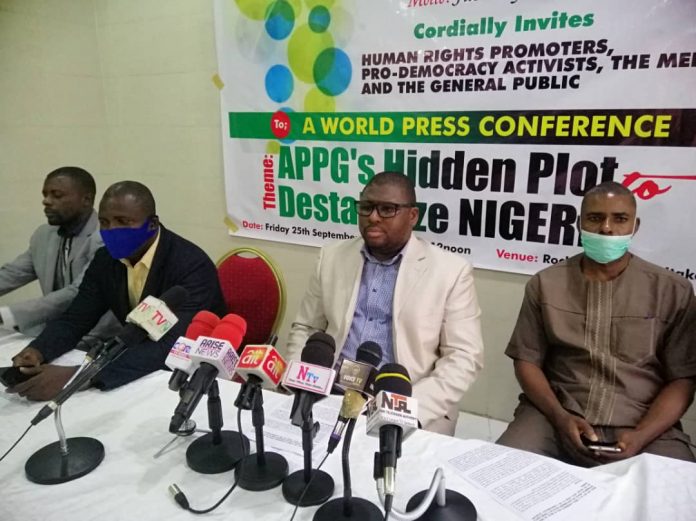 The SHAC, at a press conference on Friday in Abuja, said the lawmakers are back at its agenda to incite sectarian violence in the country having failed in previous attempts.

Recall that some members of the UK’s House of Lords in a letter dated September 14, addressed to Patricia Scotland, Secretary-General of the Commonwealth, said failure of the Federal Government to protect Nigerians was a breach of its obligations under the Commonwealth Charter.

This comes after the lawmakers had alleged genocide against Christians in Nigeria.

Executive Secretary, Ibrahim Abubakar, speaking on behalf of SHAC, said the parliamentarians are not sincere and have a motive to cause division in the country.

While the Boko Haram and other crisis was at its peak, the SHAC said the group didn’t rally for international intervention and instead of apologising, it is stocking the fire of division.

The human rights group, therefore, called on the rest of the world to pay attention to the nature of the campaign being waged by the UK lawmakers against Nigeria.

It warned that the parliamentarians should be held responsible for any further breach, degeneration or worsening of the security situation in Nigeria.

The group, however, urged the Nigerian military to remain focused and not in any way be dissuaded by this distracting strategies.

Gentlemen of the press, we have observed with concern that  s Parliament is back to its game of hounding Nigeria. Earlier in the year, the APPG mounted a campaign of disinformation against Nigeria through the publication and marketing of a report titled “Nigeria: Unfolding Genocide?”

This effort to market the report of doom fell flat as few Nigerians fell for the intended incitement to sectarian violence. The authors of the report packaged it such that people would be misled into reading targeted sectarian killing into the attacks being carried out by Boko Haram, bandits and militant herdsmen. Had Nigerians fallen for the manufacture of dissent the entire country would have been on fire by now.

We at that time drew attention to the mischievous nature of this report and the potential it has for doing damage. We also noted the deviousness of the APPG trying to separate itself from the UK Parliament by claiming that its decisions do not reflect the view of the Parliament and are also not binding on the house. For us this is a trick by the APPG to evade responsibility for the destabilization agenda it is implementing in Nigeria. This same organization used reports its fraudulently authored against the interest of Nigeria to make a case for the discontinuation of funding to the country.

Thankfully the efforts of the APPG to trigger a sectarian division in Nigeria failed. The APG has now resorted to finding other means of dividing the country by highlighting new areas in this report this is what it tried to do when it wrote to the Secretary General of Commonwealth. It has not deviated from alleging persecution of Christians and targeted extermination to now focus on other areas that are totally unrelated to the issues at hand. It is surprising that the same APPG that could not offer solution in its own home country is asking the Commonwealth though to intervene in their face of Nigeria. Had the APPG being sincere and tackled the issue of Boko Haram head on as well as the issue of and herdsmen we will not be where we are now.

Boko Haram was able to spread as much as it did because international countries that should have come to the aid of Nigeria did not do so is sincere APPG would have coordinated these other countries to respond in the appropriate way to the problems that Nigeria was facing from terrorism as represented by Boko Haram. But instead of apologizing to Nigeria and Nigerians the APPG is rather stocking the fire of division by creating the impression that the government of Nigeria has abandoned its citizens whereas this is not the true position.

It is our earnest opinion that the APPG has run short of ideas it’s a strong shot of ideas because it cannot even think about something original anymore but has rather resorted to quoting discredited Amnesty International as its latest source to demonize and put down the government of Nigeria.

The APPG report says the government of Nigeria’s abandoned its citizens and we are wondering how this can be so. It is on record are the Nigerian army and the other services of the military have successfully routed terrorists in places where they once considered as a stronghold.    Government troops have liberated villages towns and other communities that the terrorist once camped out. The military us also significantly decimated Boko Haram’s ability to operate on the scary scale it once did.

This Amnesty International that the APG is now celebrating is the same organization that has been known to be sympathetic to Boko Haram terrorists. There had been instances where Amnesty International openly supported terrorists against the government and there have also been instances when this Angel shared classified military information and intelligence with terrorists leading to troop deaths. There is therefore something suspicious but an organization that proudly serve as a caucus of the parliament and the unique in the United Kingdom come out to be promoting the falsehood packaged by Amnesty International.

We therefore want to alert the world and other stakeholders to the devious nature of the campaign being waged by APPG against Nigeria. The APG and the United kingdom’s Parliament should be held responsible for any further breach, degeneration or worsening of the security situation in Nigeria. Ordinarily would like to wonder why APPG is interested informant in trouble for Nigeria but we say that the parliamentarians who are members of this group do not believe that colonization is over. It is most unfortunate that something like this can be happening at a time when the entire world has become aware to issues of racial equality.

We are therefore restating our earlier call and demand that the APPG, the United Kingdom’s Parliament and any other country with such intent should desist from treating Nigeria as a conquered colony. We think the United Kingdom has enough issues of its own that eight parliamentarians should focus on they should stop obsessing about Nigeria.

We would like to urge the Nigerian military not to in any way be dissuaded by this distracting strategies, because that is what we see The APPG report to be. we want the Commonwealth to disregard the letter sent to his secretary general by the APG this isn’t interest of natural justice. The United Kingdom cannot cause problems for Nigeria on one hand and then turn around pretending to proffer solutions when in reality it is looking for ways to make the situation worse.

Our demands to the federal government is that should write to the Commonwealth not to interfere in the affairs of Nigeria in the manner suggested by the APPG. Our position is that where the Commonwealth refuses to back down or decides to interfere in Nigeria’s affairs in the manner suggested by the APPG the Federal Government should strongly consider withdrawing Nigeria’s membership of that body and immediately begin the process of achieving same.

Thank you for listening.