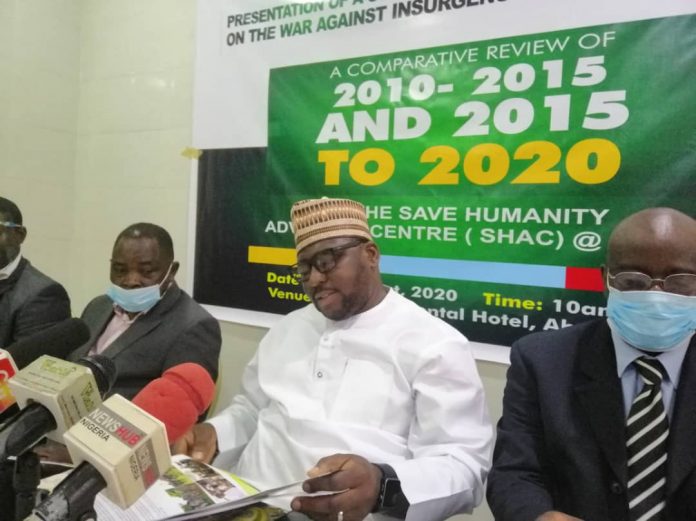 The Save Humanity Advocacy Centre (SHAC) has called for enhanced synergy, consultation and less conspiracy among political leaders and relevant stakeholders to double the Armed Forces’ successes recorded in the last five years.

According to SHAC, the strategies being deployed by the military hierarchy has been effective despite sabotage by International Non- Governmental Organizations and the political actors within the theatre.

The centre made this known in its abridged strategic report on the Boko Haram crisis in Nigeria from 2010 till date and the effectiveness of the Nigerian Military strategies towards addressing the threats posed by the Insurgency.

In the report signed by its Executive Secretary, Abubakar Ibrahim, on Wednesday, the SHAC analysed the genesis of the Boko Haram crisis, the approach of previous governments and what the current administration is doing differently.
Among others, the centre recalled that the military headquarters was moved from Abuja to Maiduguri, funding for operations drastically increased and new military leadership were appointed.

This, according to the report, has resulted in a significant turnaround in the prosecution of the Boko Haram war in favour of the Nigerian troops who are edging closer to the end of its clearance operations.

In order to sustain the momentum, the centre, however, urged stakeholders to join hands with the federal government.

While calling on religious and community leaders to support the troops, SHAC advised political leaders to desist from undermining their efforts.

Read the abridged report below:

The Boko Haram crisis in Nigeria has claimed thousands of lives and displaced millions of people. It has been estimated that the cost of the damages in North-East Nigeria is in the region of $9billion since 2009 when the group began its violent campaign in Nigeria.

Since 2009, the Boko Haram insurgency and the government’s military response have killed tens of thousands of civilians and displaced millions across the Lake Chad region, which straddles Cameroon, Chad, Niger, and Nigeria.

Boko Haram re-emerged in 2010 under the leadership of Abubakar Shekau, carrying out sporadic attacks across the northeast. Its clandestine tactics gradually grew more sophisticated, but the Nigerian government was slow to recognize the extent of the crisis. Then-President Goodluck Jonathan instead framed Boko Haram as a terrorist organization with ties to international jihadist networks, thereby laying the ground for a narrow counterterrorism response.

In 2013, the Nigerian Military intensified its campaign against Boko Haram. Yet its indiscriminate tactics failed to degrade the group’s capacity and deeply alienated the region’s civilian population. A state of emergency imposed on Borno, Yobe, and Adamawa States only deepened the cycle of violence.

In April 2014, Boko Haram’s kidnapping of 276 female students from the town of Chibok made worldwide headlines, drawing greater policy attention to the crisis. Several Western governments—including the United States—offered technical assistance and intelligence-sharing to help find the girls.

In 2015, a renewed military offensive began making headway against the group. The Nigerian MilitaryMilitary seized back most of the territory previously held by Boko Haram. Although major military campaigns in 2015–2016 succeeded in degrading the group’s territorial control, Boko Haram has proven remarkably adaptable in its tactics: Since early 2017, military gains and improved security in parts of north-eastern Nigeria have spurred a greater focus on conflict stabilization measures.

From 2010 onward, Boko Haram started launching a series of attacks on security structures and military installations in the North-Eastern part of the country. For example, on September 7 2010, Boko Haram attacked and overrun a prison in Bauchi, freeing over 700 inmates in the process. Between 2010 and 2015, Boko Haram attacks became more daring and brazen. Never in the history of political violence in Nigeria had any group deliberately targeted not just military structures but military formations and barracks. The attacks launched on Giwa Barrack and Baga military base in Borno State in 2014 and 2015 are cases in point. In the two encounters, over 500 lives were lost. What became noticeable in the course of the confrontation was that the adversaries simultaneously employed asymmetric and conventional tactics and strategies in waging war.

The fact lends credence to the lackadaisical approach by previous administrations towards addressing the threats posed by the Boko Haram group. It was stated in several fora that the Goodluck Jonathan administration saw the emergence of the Boko Haram group as a ploy by the North against his administration following the death of President Umaru Yar’Adua in 2010. Consequently, the government paid little attention to the activities of the group now led by a radical Abubakar Shekau. The group, therefore, grew in strength and sophistication and continued to wreak havoc in North-East Nigeria.

Another factor that was of significant concern was that lack of professionalism in the Armed Forces occasioned by mass corruption that saw monies meant for the purchase of arms and ammunitions ending up in private pockets. This fact consequently led to casualties of immeasurable proportion on the side of the Nigerian troops, and also the Boko Haram group capturing territories on Nigerian soil.

The 2015 Baga Massacre is an example of how incapacitated the Nigerian MilitaryMilitary were in dealing with the threats posed by the Boko Haram group. Boko Haram overran a military base that was the headquarters of the Multinational Joint Task Force containing troops from Chad, Niger, and Nigeria. The terror group then forced thousands of locals from the region and committed mass killings.

Aside from this, the country was generally unsafe with countless Boko Haram attacks on crucial government infrastructures such as the headquarters of the Nigerian Police Force and the Headquarters of the United Nations in Nigeria. Public places such as motor parks, places of worships were not spared either as Boko Haram imposed a regime of absolute fear in the country. The government seemed clueless on ways to address the threats posed by the Boko Haram group, so much, so it blamed members of the opposition, while the country continued to bleed.

The change of government in May 2015, has brought about a significant difference in the prosecution of the Boko Haram war. Upon assumption of office, President Muhammadu Buhari promised to take the issue of security.

President Muhammadu Buhari has made some modest reforms to improve the Military’s effectiveness against Boko Haram. He moved the Military’s headquarters from Abuja to Maiduguri, increased funding for operations in the area, and appointed new military leadership.

Among his earliest acts in office was to replace the heads of the army, navy, and air force. The new army chief by many accounts has taken a more proactive approach than his predecessors toward countering the group. For example, they moved the army’s operational headquarters from Abuja to Maiduguri and have deployed more long-range patrols in the region. Experts suggest that the Military is now conducting more strategically-focused operations, such as those that target Boko Haram’s logistics routes.

According to reports, morale within the army has improved under the new leadership. The government has arrested several former senior officials on corruption charges, including former President Jonathan’s National Security Advisor, who has been charged with fraud over a $2 billion arms deal for equipment that was reportedly never delivered. Jonathan’s former chief of defence has been accused of stealing $20 million from the air force, and, as of late March 2016, some 300 individuals, including army officers, and companies were under investigation for the embezzlement between 2011 and 2015 of an estimated $240 million in fraudulent or overpaid defence contracts.

Under the present administration, Nigeria has sought military support from its neighbours, who increasingly suffered attacks during Boko Haram’s upsurge. Since 2015, Cameroon, Chad, and Niger have deployed thousands of troops as part of a multinational force authorized by the African Union. The coalition has been credited with helping the Nigerian MilitaryMilitary retake much of the territory claimed by Boko Haram and reduce violence linked to the group to levels seen before 2014.

The Nigerian Army has introduced various counter-insurgency strategies that have recoded multiple gains.

Aside from the reclaiming of territories once under the control of the Boko Haram group, the Nigerian Army also displaced the group from their operational headquarters in Sambisa forest.

The period from 2015 to date has also witnessed a transformation of the Nigerian MilitaryMilitary from a force in disarray to a professional fighting force fighting within the rules of engagement and respect for human rights.

This report concludes that the period between 2010 to 2015 could be regarded as one of the lowest points in the history of the Nigerian Military because of the inability to deal with the threats posed by the Boko Haram group. The period was also occasioned by the dearth of arms and ammunitions in the Nigerian Military as well as a high rate of lethargy amongst the officers and soldiers in the prosecution of the war against Insurgency.

It is indeed a statement of fact that with the advent of the Muhammadu Buhari administration in 2015 the fortunes of the Nigerian Military changed as evident in the prosecution of the war against terrorism in Nigeria. A cursory look at the available indices indicates that there have been substantial gains in the fight against Boko Haram terrorist group.

This period has seen their ranks broken, and they have resulted in aiming at soft targets in women and children, going on rampages in villages and causing destructions to paint a picture of a potent fighting force. However, in truth, they are in disarray. The troops have displayed the right mental balance in the prosecution of the war, and this has led to the tangible gains recorded so far. All of these gains are attributable to the commitment of President Muhammadu Buhari to address the various threats posed by the Boko Haram group.

After extensive study of the Boko Haram crisis from 2010 to date, the following recommendations are made:

All stakeholders must join hands with the federal government in the war against terrorism in Nigeria.

The political leadership in the country must desist from attempting to undermine the efforts of the Nigerian Military by engaging in acts that are counter-progressive in the war against terrorism.

The religious and community leaders in the North-East must continue to support the Nigerian Military in its operations in a bid to bringing to an end the Boko Haram crisis.