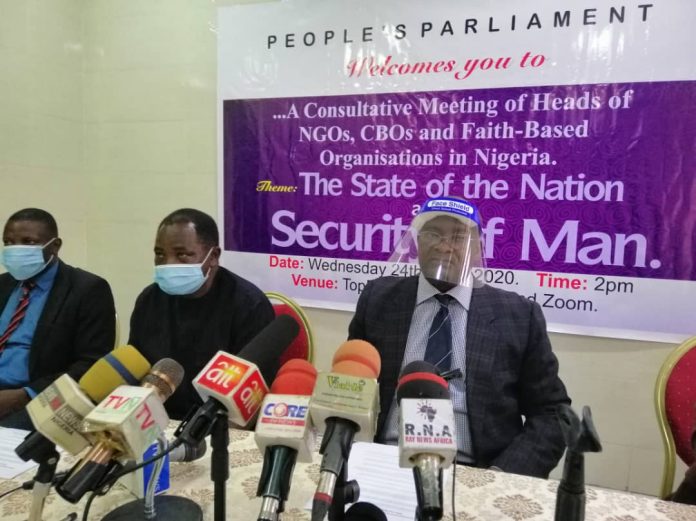 A group of community-based organizations, under the auspices of People’s Parliament, have vowed to maintain total support for President Muhammadu Buhari’s administration and the Service Chiefs in the fight against insurgency.

The group made this known in a communique signed by George Gondo and Adamu Bagudu, its Chairman and Secretary respectively and addressed by Gabriel Agibi on Wednesday in Abuja.

People’s Parliament, which also comprises of faith-based organizations, NGOs such as Grasshoot Peace Initiative and United Nigeria Forum, rising from an extraordinary emergency assembly held in Abuja and monitored on Skype and zoom, maintained that the President and his Service Chiefs have demonstrated capacity, willpower and the expertise to rid the country of terrorism, banditry and other crimes and would require the total support of all Nigerians to deliver absolute peace across the country.

While the military has done its part to end insurgency, terrorism, banditry and other crimes, the group acknowledged that some government officials and stakeholders have not been forthcoming.

People’s Parliament, however, called on state governors and stakeholders to play their own part, as all hands must be on deck to defeat the remnants of the Boko Haram and ISWAP terrorists who are attempting to regroup to unleash further heinous atrocities on citizens.

The group said it overwhelmingly passed a vote of confidence on President Buhari and his security architecture, advising the already decimated Islamic fighters to surrender now they have the chance.

The meeting was convened by the People’s Parliament with support from the Global Amnesty Watch and deliberated extensively on the state o,f affairs in Nigeria especially the security situation in the country.

Participants took their time to contribute to the discussions and after extensive deliberations on the issues which centred on the performance of the Military and other stakeholders in the current war against insurgency, terrorism, banditry and other crimes in Nigeria, made the following observations:

That Nigeria has not arrived at its desired destination as far as the security of the country is concerned.

That there has however been a great improvement in the security of the country in the last five years.

That the current administration of President Muhammadu Buhari has shown commitment towards ending terrorism and insurgency as well as other forms of crime in the country.

That the President’s determination to secure all citizens and others living in Nigeria and the territorial integrity of the country, has been demonstrated through making the right appointments in the armed forces, providing adequate funding and the procurement of weapons for troops engaged in the battle against terrorism and insurgency.

That while the armed forces have been relentless in the fight against insurgency, terrorism, banditry and other crime, some top security personnel and other stakeholders have not been forthcoming in that regard.

That much ground has been covered in the bid to put the Boko Haram/ISWAP terrorists out of business since the Chief of Army Staff relocated to the theatre of operation in the Northeast in March.

That the recent attacks in Gubio, Borno State and in Faskari, Katsina State are quite unfortunate.

That the attacks in Gubio, Borno State and in communities in Faskari Local Government of Katsina State could have been avoided if other top security officials and stakeholders have been alive to their responsibilities.

That it is the failure of intelligence gathering, inability to infiltrate the camps of the insurgents and lack of consultation with stakeholders, that are responsible for such security breaches.

That rather than gain relevance through the supply of actionable intelligence for troops, top security officials are more concerned about blackmailing the service chiefs to feather their own nests.

That state governours of the affected states, as chief security officers of their respective states, appears not to have been properly briefed about their expected roles in the fight against insurgency and terrorism.

That the recent meeting of the President with top security personnel and service chiefs is a step in the right direction.

In the light of the above observations by the participants at the meeting, the following courses of action were recommended to bring to an end the scourge of terrorism and insurgency as well as curb the level of violence and crime in Nigeria.

All stakeholders in the security structure of the country just as a matter of urgency,  put hands on deck to enable Nigeria to defeat the remnants of the Boko Haram and ISWAP terrorists groups who are attempting to regroup to unleash further heinous atrocities on citizens of this country.

All CBOs, CSOs and FBOs, as well as the general public, should expose any individual or group of persons suspected to be behind or aiding the crimes of terrorism, insurgency and other related crimes in Nigeria.

Security agencies charged with investigations and intelligence gathering must step up their game to provide actionable intelligence to troops so as to complement what the military is doing at the battlefield.

The military should not relent or be discouraged by the current setback in Gubio and Faskari Local Governments of Borno and Katsina States respectively but sustain the push against the remnants of the terrorist groups until they are defeated.

The Boko Haram and ISWAP terrorists as well as other bandits operating in the Northwestern part of the country should take advantage of the current window and surrender as they indicated doing some months back and not be deceived that they can withstand the military.

Governors in the North must go beyond calling for meetings only after attacks on communities have taken place to take proactive measures to prevent such.

The meeting passed a vote of confidence on President Muhammadu Buhari and his security architecture believing that with the total support and collaboration from the Nigerian people, the final defeat of Boko Haram and all the criminal elements operating in Nigeria would soon be accomplished.

The Military and other security agencies should collaborate to bring not just the fighters but collaborators, sponsors and promoters of the group to book.

The meeting has made these recommendations believing sincerely that it will go a long way in stamping out the security challenges in the country.